Yuta Komatsuda is the current 2010 Master’s Division World Champion. He used LuxChomp with a Dialga G LV.X tech. This will be a breakdown of his winning list.

Note: This article will focus more on why a card was included as well as the reason for the number of copies in the deck, so if you are a newer player that doesn’t know the metagame as well, you may want to look at what the cards do before reading the article.

pokebeach.comLuxray GL LV.X
This is an extremely powerful card, able to drag up anything such as Claydol, Uxie or a non-SP basic and KO it, allowing you to majorly disrupt your opponent’s set up. It is able to do 60 damage for 1 lightning and an energy gain. Luxray GL LV.X is a main attacker in the deck.

Garchomp C LV.X
Another powerful disruptor, and the other main attacker for the deck. For a double colorless and an energy gain, you can do 80 to any of your opponent’s Pokémon at the cost of discarding 2 energies attached to it. Due to it’s attack requiring C energy, it can abuse Double Colorless Energy.

Dialga G LV.X
This card was used as a secondary attacker in the deck. It was also used as a Mewtwo LV.X counter. It also helped with matches against Donphan. I believe that this tech line will see even more play now that Viletomb is is becoming so popular.

Azelf LA
Due to this deck having a significant amount of techs, it was vulnerable to having a card prized when it was needed, so Azelf was used to help greatly with that problem.

Uxie LA & Uxie LV.X
Uxie is used for it’s “Set Up”, which allows you to draw until you have 7 cards when it’s put in play. Uxie LV.X was used as an engine for the deck, helping the deck to keep it’s speed throughout the game. It is used to help counter Machamp SF.

Crobat G
Well, this inclusion should be self explanatory. It was used to set up 1HKOs.

pokebeach.comDragonite FB
This card is a little bit more interesting. Instead of using the traditional Garchomp C LV.X counter, Ambipom G, he chose this card instead. I consider Dragonite FB to be the better of the two for 2 reasons. The first being that it can 1HKO a Garchomp LV.X even if they have energy on it. The second is that it can also 1HKO Luxray, Garchomp, Crobat G and many other SP basics.

Lucario GL
This card was included for it’s ability to make all weaknesses in play x2, very similar to the stadium Lake Boundary. This helped with matches such as Gyarados and Machamp.

Bronzong G
This card was included for it’s Poké-power “Galactic Switch” which allows you one energy attached to one of your Pokémon SP to another Pokémon. This helped make sure that the right Pokémon had the right energy when needed.

Most of the Trainer and Supporter lines are self explanatory, but here’s a few quick notes on them:

3 SP Radars
I believe that 3 is the perfect number in most SP decks because that way you can safely use two each match, without having to worry as much about an SP Radar being prized.

3 Power Spray
I’ve seen some decks run 4, but I think 3 is the best number so you can use the 4th slot for focusing on consistency.

pokebeach.com1 Pokémon Communication
I have done a lot of testing with LuxChomp and I have found that 1 Communication works wonders to get rid of a card you don’t need and instead get a card that you do.

1 Night Maintenance & Aaron’s Collection
These cards are used for recovery and both help momentously late game, to help get those cards back and ready to use again.

3 Professor Oak’s New Theory
I think that this was a very good idea, PONT as it’s called, is very good for refreshing your hand. I play at least 2 in nearly all of my decks.

Warp Energy
This was used in place of Switch/Warp Point. I think this was a good choice because it could be used in a trainer and also as food for Garchomp C LV.X’s “Dragon Rush”. With Vileplume becoming more popular, I believe 1-2 will be added to almost every Sablelock, LuxChomp and DialgaChomp build.

A great decklist, expert techs and tons of play testing to make sure his deck is the best it could possibly be. This is what allowed Yuta Komatsuda to win the 2010 World Championships. Congratulations Yuta and good luck next year. I hope you get the chance to defend your title at the Pokémon 2011 World Champions! 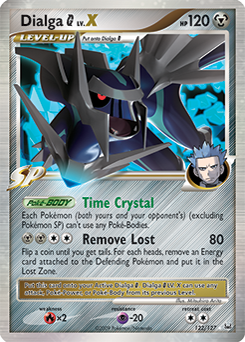