A new season is just starting, and with it come new rules, new mechanics, new sets, new strategies and of course a new format to adapt, counter or break depending on your style.

pokemon-paradijs.comThe following deck will give you a very strong option to use at one of your Autumn Battle Roads, but be very aware that you should only choose this deck if you are predicting that most of the players that you should be aware of are using some sort of SP variant. With the lack of Unown G in the format to prevent Machamp from using it’s attack “Take Out”, they have very few responses when an early Machamp hits play and starts KOing stuff left and right.

Not only do they have to worry about building up a Toxicroak G PL (psychic one) but also have in mind a follow up plan for when that Toxicroak G dies, as it is much easier (ironically) to build up another Machamp than another Toxicroak G, given how very few resources SP decks spend on ‘recovery cards’ such as Aaron’s Collection or Palmer’s Contribution. Getting that crucial KO on Toxicroak G can be pretty easy with Kingdra and the availability of Crobat G and Expert Belt’s, which allows you to get way ahead in the game and makes it very difficult for SP decks to catch up.

Also from my experience, most decks expect a 2-1-2 line of Machamp in most decks, so this bulkier build has proven to be much more effective. One thing you will note in this and my coming articles, is that I usually favor consistency over techs, but that does not mean my builds are the only way to play a certain deck.

Now here is the decklist, and I will go into more detail on the specifics and matchups later on.

First I will elaborate on the engine used and which I have found to work well.

This combination of Pokémon gives you a very reliable way to ensure you can respond and know what you’re dealing with after one of your Pokémon has been KO’d by drawing cards with Uxie and netting an extra supporters with Smeargle. The other huge advantage of “Portrait” is letting you see your opponent’s hand, as it can allow you to prepare for whatever your opponent is planning, but also against SP decks, they will be forced into tough decisions to decide between using TGI Power Spray on Smeargle or Uxie, but having both to help support your draw engine make this deck very solid throughout a full game.

Something to consider adding might be a second Unown Q, despite of increasing the chance to start with it as your only Basic Pokémon, Unown Q is vital in letting you use Smeargle UD and Uxie LV.X to their full potential.

Getting your Stage 2 lines as fast as possible is the most crucial aspect of this deck, but more specifically the right one for the right situation. This deck is more of a ‘reactionary’ deck than one with a set strategy. You first try to be aggressive with early KOs with Kingdra or Machamp, but after that you must really pay attention to the field of your opponent and what his immediate plan is, so that you can respond accordingly with either of your main hitters. Pokémon Communication, Pokémon Collector, Luxury Ball and Bebe’s Search allow you to do this effectively, while they also provide you with the means to be able to get out your support Pokémon mentioned above.

Finally the non-specific draw cards. I have started using PONT since last Worlds after having heard of the champions success with it, and I must say it is a very reliable card at any point during the game, be it early where you need a refresh on your hand, or late game where your deck is thinner and you have better odds of drawing the specific card you need.

These 2 slots are very personal preference based though, and I have also tried Copycat and Cynthia’s Feelings in this spot, and all 3 cards have their pros and cons, but given how I like consistency, I much prefer my guaranteed 6 cards than the variance which bring the other 2 cards.

Finally the supporting trainers. Rare Candy and Broken Time-Space are two necessary cards in Stage 2 decks like this. I have also tried reversing the Rare Candy and BTS count, but during late game situations, there have never been any where I had ‘spare’ Rare Candy’s, but there are a lot where the BTS’s are deadweight in your hand and just waiting to be discarded by Kingdra, so I think this amount is the ideal. Palmer’s Contribution allows you to keep up with a steady flow of Pokémon, and Expert Belt gives you that extra damage or HP you required to turn a game in your favor.

Overall this are all utility cards but they really help support your deck and give it strength during any phase of the game, Rare Candy and BTS allow for the early pressure, and Palmer’s Contribution and Expert Belt allow for mid and late game consistency and control.

Now that we have covered this, I will elaborate on why these 2 Pokémon work together so well and the inclusion of the other cards not touched upon above.

pokemon-paradijs.comKingdra and Machamp pair very well together for several reasons:

The biggest Lightning type threat in the environment is of course Luxray GL, and Machamp is able to eliminate or diminish the threat it imposes on Kingdra to allow it to rack up bench damage and 2HKO almost every Pokémon you’d expect in the common decks.

The bench damage dealt by Kingdra allows for it and Machamp to get easier KOs on non-Basic Pokémon, and combined with Expert Belt and Machamp LV.X it allows them to 1HKO a lot of threatening Pokémon rather than 2HKOing them.

Having a single energy requirement for their main attack on both Pokémon allows for a lot of breathing room in terms of missing energy drops due to the low energy count.

Crobat G and Machamp LV.X allow you to get those surprise KOs the opponent isn’t expecting and might ruin their plans. Having only 1 Crobat G is not ideal, but the deck is very tight in space, so while not ideal, it is better having the single one which can be easily searched for, than not having any and being 10 damage short of a crucial KO. Both of these cards need to be very well timed though, so always be aware of that and make sure you have a follow up plan when using Machamp LV.X as it will probably get KO’d on the turn after hits play.

I do not think the energy requires more explanation, but just in case, Rainbow Energy is to help cover both of your main attackers, and the rest is equally divided between fighting and water. I have found myself in situation where I need one or the other, but I have not seen a clear tendency of needing more Water over Fighting or viceversa.

The deck has worked out pretty well so far in testing but it is still too early to tell. I will be posting up a new article about this deck with more detailed matchups once I gather more info myself and will go into extensive detail as well with an updated decklist in the near future.

Thanks for reading, and be sure to consider this deck, be it to use it or playing against it, especially now that you know a lot of the intricacies and decisions behind the list. 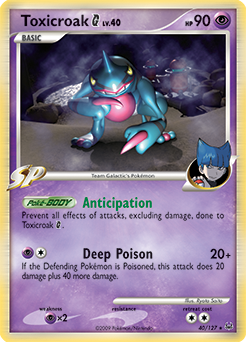