This Underground staff interview will be with the webmaster of SixPrizes himself, Adam Capriola! Enjoy!

What’s your favorite thing about the TCG?
I love how it is such an intellectual competition. I may be writing a post on this soon (if not by the time that this interview comes out), but to me the Pokémon TCG is like mental warfare… everyone tries extremely hard to out-do one another, even though there really aren’t any killer prizes on the line for most tournaments.

If you wanted to play for big prizes, you’d be playing Magic: The Gathering. But what’s cool about Pokémon is that everyone mainly plays to win and I love that competitive spirit. The quest to qualify for Worlds is something that seems to stoke everyone up to the point of obsession, but it’s awesome! It makes for a fun challenge. Everyone that plays is really friendly too which is great. We’re all fiercely competitive, but kind enough to shake hands after the game.

Where do you play test the most?
I playtest online using Apprentice most of the time. It’s most time efficient for me, though I do like to spend late nights playtesting in person. I really should start going to league, but it’s just more convenient for me to hop on Apprentice at any hour of the day.

What is your most memorable match?
Hmmm… good question. I have a few in mind. Most of the ones that stick in my head were losing bouts, but one memorable match I won was in the finals of the Pennsylvania Gym Challenge in 2006. I was using Blastoise ex/Steelix ex/Lugia ex/Pidgeot RG and was up against Chris Fulop who was using this brand new deck called “Mew Lock.” Nothing more than a paid trip to Worlds was on the line.

Luckily I had tested a couple games against Mew Lock because Seena Ghaziaskar had leaked it to me before the tournament, so I somewhat knew how to play the matchup. Otherwise I’m sure Chris would have crushed me. It was a really hard deck to play against, and possibly even harder to use, but Fulop is a pro and knew what he was doing. I think Fulop was one of the first people to ever use the deck.

Game 1 took almost the full hour of time allotted for the finals. I managed not to get totally locked and got the point toward the end of the game where if I could topdeck 1-of 2 cards, I would pull out the win. I topdecked a Power Tree stadium card to break the lock, allowing me to use Quick Search with Pidgeot to get what I needed, and Chris scooped.

Truth be told, I actually think I Quick Searched for the wrong card. There was one card I could have gotten that would have just ended the game, but I think I got something that would have given Chris a chance the next turn, but luckily he scooped (assuming I made the right play). Maybe I had it won anyway, I’m not sure. There was no way Game 2 could be completed so I won the trip for Worlds in a hard fought, exhausting match.

What do you consider to be your greatest achievement?
In 2005 I helped to create Queendom (Nidoqueen/Pidgeot/Milotic) which placed 1st and 3rd at Worlds that year. Jeremy Maron and Pablo Meza did such an incredible job, it was a pleasure working together with them that year.

Do you play the video games or watch the anime?
I played the Red version and Pokémon Pinball, and watched the anime when it initially came out, but haven’t watched the anime or played the games since. I was caught up in the craze when it first came out, but through the years I’ve only stuck with the card game. I like the interaction and competitive nature of the card game more than anything.

Did you have a mentor or someone who taught you Pokémon or did you learn on your own?
Pojo was an incredible resource for me what I was starting out. Specifically I remember worshipping Scott Gerhardt, I thought he was the best player ever. I read his articles like they were scripture. I even wanted to travel to Canada to play against him one summer and almost convinced my mom to stop by his local card shop while we were at Niagra Falls on vacation.

What was your favorite modified format to play in?
I honestly forget all the formats, and I was out of the game for a few years, but when Nintendo took over those formats were kind of fun because nobody was real serious back then, so you could play some whacky decks and have a chance to win bigger tournaments. I think the format was Expedition onward or Ruby & Shappire onward.

I remember having success with a nutty Team Aqua deck with Suicune ex that nobody else used. I don’t think I won any huge tournaments with it, but it was unique. I also did well with a Gorebyss / Starmie deck at the East Coast Stadium Challenge in 2004. The deck was ridiculous and simply built as a total metagame counter, but it worked!

How does it feel to be regarded as one of the top Pokémon players?
I am not sure if I am still regarded as a top player by other people, but I feel I’m at the point in my Pokémon TCG career where I’ve achieved pretty much all I could ask for. I’ve made it to Worlds a few times, helped create a deck that surprised everyone at Worlds, and have done well at various tournaments. I play without pressure now and just go out there to for the challenge and to help other people become better at the game.

Do you have any special talent other than being a top-notch Pokémon player?
I like to play tennis, though I’m not really that great at it. Serving and consistency are difficult to maintain and it takes years of practice to get good. I still really enjoy playing just for the hell of it though. It feels great whenever you can get that lucky ace or smash a cross-court forehand winner.

I don’t know if I really have any special talents though. I don’t consider myself to be great at a lot of things I do. I just like to do them.

In 2 years, do you still plan to be playing the TCG?
2 years ago I said I’d quit and here I am… so why not?

I hope you enjoyed this interview. If you want to know more about Adam, feel free to leave questions for him in the comments section below. 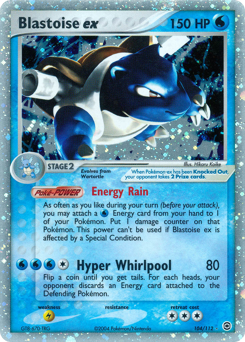