This is my interview with SixPrizes Underground writer and Prof-it host J-Wittz. Enjoy!

What’s your favorite thing about the Pokémon TCG?
The game’s positive atmosphere and all the great people I’ve met through playing it. I’ve met some of my best friends here at school just because they played Pokémon. Simply playing the Pokémon Trading Card game is relaxing, fun, and rewarding. You’ll never find a more kind (and believe it or not, socially acceptable) fanbase from any other card game.

Your least favorite?
The general cutting of prize support over the years. I think there was a point where winning a Regional got you a trip, and Battle Roads used to net you half a box of cards (16 packs compared to 4 now). If it was really that big of a deal to me I wouldn’t still be playing, but sometimes it’s tough when you only have a brief opportunity to earn a scholarship through good performances (1st in States, 1st or 2nd at Regionals, top 8 at nationals, top X at worlds). It’s an expensive game to remain competitive, and it’s hard not to get jealous of the prizes that other card games give (like Magic the Gathering).

Who is your favorite person to play against?
Yehoshua Tate (known as Yoshi to the Wisconsin croud). He’s an extremely smart player, but he’s always cracking jokes over the course of the game, and you can tell he’s playing the game for run over glory/prizes.

Any player that can make the attitude of a top-tier game loose, or even funny earns respect in my book. It minimizes any hard feelings to the loser, and makes the day much less stressful.

Do you play unlimited?
I do, at least online every now in then. I’m still convinced that Blastoise-EX+Foretress SF+Espeon AQ+Pokécenter+Gastly SF is still my favorite deck out there. I’ve had it deal 200 damage to the entire opponent’s field in one turn. Providing you can prevent them from setting Muk/Slowking up, you can get the combo off every time. Basically, with Blastoise-EX you can attach unlimited energy to foretress, which spreads 20 damage every time you flip tails after an energy drop, and then with espeon AQ you get infinite energy drops. With pokemon center you keep all of your own pokemon from getting Knocked Out. It’s not uncommon to get over 10 energy drops in one turn with how strong the drawpower is in unlimited. The Gastly start just prevents your opponent from taking off instead of you.

Do you play any other TCG or CCG besides Pokémon?
I don’t play any competitive TCGs other than Pokémon anymore. I played Yu-Gi-Oh! For about 2 years and stopped after the Chaos era.

My family plays the collectable card game Killer Bunnies, we have every set.

My friends play Munchkin and I join in with them every once in a while, too.

In 2 years, do you still plan to be doing Prof-it?
I hope! Late November will mark 1 year of episodes, and it feels like everything went so quickly. For those of you who don’t know, I graduate next year from school, so it might be harder to consistently release weekly episodes once I have an actual career, but I’ll definitely be doing my best, and I’ll still be playing the card game for at least the bigger tournaments.

Do you have any special talent other than being a top-notch Pokémon player?
As a lot of you know, I’m a pretty competitive beatboxer, and I do a lot of rapping in my free time. I’m also pretty good with digital art and Tetris.

Do you play the video games or watch the anime?
I do both. I don’t do super heavy EV-training or breeding or anything like some of the people who dedicate their lives to the game, though. I just try and catch all the pokemon and beat all of the gym leaders. Me and my girlfriend have been on a Pokémarathon of all the episodes from the very beginning—were at around 50 episodes in right now.

What do you consider to be your greatest achievement?
My MO Regionals win is the biggest title I’ve received, but I think my biggest achievement was never long to SP once with Sablock over Regionals-Battle Roads-Nationals last year. I tested my SP matchup endlessly and I really understood the matchup by the end of the season. Now that I’m trying new decks I have to learn the matchup all over again—it’s definitely a huge challenge to get back to the level I was at.

Do you think Pokémon is more skilled or luck based?
Skill. There’s a reason the same players keep winning big. Pooka placed 1st and 3rd in the past 2 Nationals—the 2 biggest tournaments ever held. Ness has won Worlds twice. Sammi Sekkoum has top cut for worlds at least 6 times, including 3 top 8s and 1 runner-up. Luck can decide things like whether or not Yuta Komatsuda can topdeck Uxie X to ko a Machamp to win worlds, or things like Fabien Garner flipping 3 tails in top 8-of worlds last year to Steven Silvestro, but luck doesn’t prevent the best players from consistently reaching the top tables. Luck can help you have a good day, but you can’t ride on luck alone to be a great player. Just ask Con Le how many crucial double tails he flipped at Nationals/Worlds : P.

What do you like to do when you’re not playing Pokémon?
I spend a lot of time messing with different digital art projects, gaming, and hanging with my girlfriend/family. Right now I’m addicted to Plants Vs. Zombies and Fallout 3.

Thanks for letting me be a part of this! 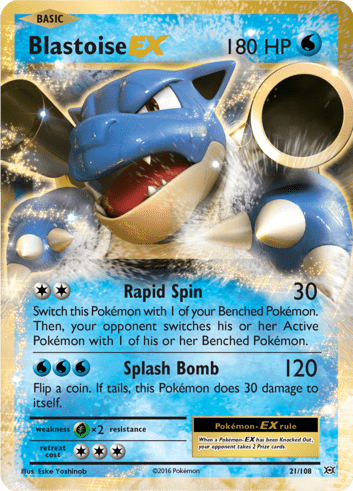