When Spring Battle Roads ended, I knew that I wasn’t going to attend Nationals or Worlds. The next time I would be playing in a sanctioned event would be after the rotation, so, as many of you did, I began working on “post-rotation” decks and ultimately created 1HKO’s Secret Deck named TOSSED.

At first, I tweaked the Gyarados deck that I had success with through States, Regionals, and Battle Roads. After playing it and tweaking, it just didn’t feel comfortable without Felicity’s Drawing. The deck didn’t flow as it once did.

pokebeach.comThe other deck that I had played recently was Shuppet. I had used a very aggressive build relying on minimal energy and long line of trainers to thin my deck, keep my hand unclogged, and get me the necessary PlusPowers and Expert Belts. Looking at what was rotating out, I knew that the same Shuppet-based strategy could no longer work consistently thanks to the loss of Roseanne’s Research, Mr. Mime, and Night Maintenance.

The main loss was Roseanne’s Research, because it gave the deck the ability to run just 2 basic energy cards. I played around a bit with adding Cyrus’s Conspiracy as a Roseanne replacement. The deck already ran 4 Poké Turn and 2 Crobat G. Cyrus couldn’t be all bad. It just didn’t work well. The loss of Mime and Night Maintenance became more pronounced, and the deck was doomed for “fun/league” status. I let the idea fade.

Then one day, I had a “Stupid Deck Idea.” Usually, those end up getting written down (on the computer), and then forgotten. I had taken to adding them to the Team Omar site just for archival purposes, but this one was different. For some reason, I actually built the deck while watching TV that night, and it played great (solitaire-wise). I could come close to 6 Prizes in 6 turns against a hapless opponent.

The loss of Mr. Mime meant that there was no good wall to put up after a “Fade Out” (or “Psychic Restore”) attack. He can sit around for turns and turns not taking a bit of damage, and that was one of the basic principles of the Shuppet deck. My new idea was that Crobat G could replace Mr. Mime as the deck’s wall. Of course, he would incur damage, but if he wasn’t 1HKO’d, you could put up your other Crobat next turn. Ultimately, Garchomp C LV.X could come in and Healing Breath your walls and let them do it all over again.

pokebeach.comThat was the basis of the build, but the deck was more than that. Garchomp C needed the ability to attack. One of the problems with him, in the past, is that he really eats up DCE, and there was no good way to search out the non-basic energy. The Shuppet mentality of thinning your deck as much as possible lent itself well to obtaining your DCEs. The inclusion of 4 Poké Drawer + and 4 Pokédex along with 4 basic Uxie made it very likely to get DCEs in hand whenever you may need them.

They also worked well with Dunsparce and Uxie’s attacks if you couldn’t get a basic Psychic energy to use Shuppet’s attack. In fact, it was later pointed out to me (by someone that I shared the list with) that the deck did very well in the current (pre-rotation) meta of the time due to its ability to overcome the Downer Material lock that would otherwise plague SP and Shuppet decks. The DCE meant that Dunsparce could Fade Out turn after turn without needing 2 energy cards.

As I had only tried it against a less-than-realistic opponent, I wondered how it would fare in real competition. I was excited to use it against my teammates and see what they thought. I recall Omar saying that we needed a team secret deck, and I was like, “It’s right here!” This is what it looked like.

Omar took it to an informal tourney where only post-rotation decks were allowed, and he went undefeated. We named the deck TOSSED for its ability to “toss” 80 damage at will, “toss” Shuppet/Dunsparce/Uxie back to your hand/deck, and “toss” your opponent a loss. You could sit down across from someone and ask, “Are you ready to get TOSSED?”

As it sits now, the deck rarely has energy on the field, so I chose “Energyless.” Either way, the E is kinda weak, so if you’ve got a good suggestion there, let me know.

pokebeach.comThe deck doesn’t play exactly as I originally intended when I built it. I figured on a Shuppet deck that could snipe and never let the opponent get set up. It actually plays like a nice synergistic mix of Shuppet and SP. It can do many of the things a LuxChomp deck could do, and that’s what opponents expect. Then, it can pile up a bunch of PlusPowers on a Shuppet/Duncesparce/Uxie and hit for weakness.

The deck’s field is hard to disrupt, since there is rarely any important resources left out. When your opponent KOs something, it often just opens a bench slot for you to do something new. Losing Energy Gains is your only real concern. Sometimes you will leave an Ambipom or Promocroak out with energy or EGain, but that would usually mean that you got a KO, and losing the energy might just be the price you have to pay. Otherwise, you can Leap Away or PokéTurn the resources back next turn.

So, things were going great, but nobody I knew was going to Worlds. I doubt that they would want to play an unproven deck like this at that event, anyway, but I do believe it could have done well against the meta of that time. I decided that it would keep until Battle Roads rolled around, and we’d have a nice surprise.

The problem was that the meta shifted. You would think that a deck that was good before the rotation, losing no cards, would still work well in the post-rotation format. Well, the thing that hadn’t been taken into account (at the time the deck was built) was how Undaunted would affect the meta.

Undaunted rolled out, and 2 problem decks came to prominence. DialgaChomp and Spiritomb/Vileplume are both currently rampant in the tournament scene. Energy Exchanger has seen to the resurgence of DialgaChomp, giving it a great way to get multiple special metal energies to tank. Vileplume has given rise to different VileTomb builds that rely on supporters and Darkness Grace while shutting down trainers all game long.

pokebeach.comBoth of these decks are a big problem for TOSSED. Dialga G can shut down the deck’s trainers and easily wall against the Psychic attackers, while Vileplume makes the deck’s trainer-based draw engine and attack system grind to a halt. These limiting TOSSED’s options and effectively hand the deck an auto-loss.

I still contend that TOSSED can have an impact in the right metagame. As new sets come out, the meta may again shift, opening the door for a sneaky TOSSED play. League would be a great place to try the deck out, as it would really surprise opponents with its speed. Ultimately, though, to stay competitive, the deck may require some mods.

We’ve already worked on multiple different directions that the deck can go in, and I plan to detail those in upcoming articles that will be posted on Team Omar. In fact, I played 3 different versions of the deck at 3 different Battle Roads this season, and others are playing it elsewhere. Of the lists I played, one was very similar to the list posted here, while the other two featured techs for Vileplume, Spiritomb, and Dialga matchups.

So, give the deck a try, and let me know what you think. If you want more info, check out 1HKO for other articles about the deck and various builds we’ve tested and played. In particular, please see the article about “Playing TOSSED”.

Thanks for reading, and thanks to SixPrizes for posting great articles. If you haven’t seen the latest two Underground articles, you’re missing out. 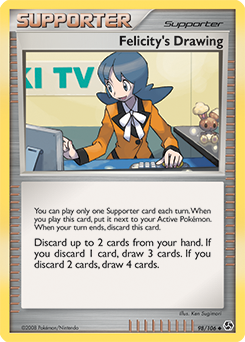