Bronzong is a stage 1 metal Pokémon. Being a metal Pokémon gives it the nice bonus of special metal energies. It has an average 90 HP, an expected fire weakness and a -20 Psychic resistance, which gives it a little defense versus Gengar. It also has a Retreat Cost of 3, which is terrible, but expected.

Bronzong doesn’t have a Poké-Power or Poké-Body, so it must have some useful attacks if it wants to see play. It’s second attack is hardly worth talking about, for CC does a measly 30 damage and moves an energy attached to it to a benched Pokémon. Even if you use Double Colorless, still bad and not worth the investment. The only way you’d ever use the attack is if it’s stuck active and you have a DCE in hand.

The reason it’s receiving a bit of attention however, is for it’s first attack “Legend Ceremony”, which for one colorless let’s you search your deck for both halves of a Legend card and put them in your hand.

This card is a lot like Furret SW, which is a stage 1 Pokémon with an attack that is meant to help you set up. However, Bronzong is much worst because the attack isn’t free, a big Retreat Cost and is much more restrictive.

Even with all of that, I think the single biggest thing that will stop Bronzong is the lack of a really good Legend Pokémon. I know that there are a few good ones (ERL, KGL), but just aren’t good enough to be a successful deck on their own. Perhaps enough good Legend support will be released, so a full Legend deck can be successful, but until then…

Rating 2.5/5 (Just not enough good Legend stuff out yet, hopefully that changes.) 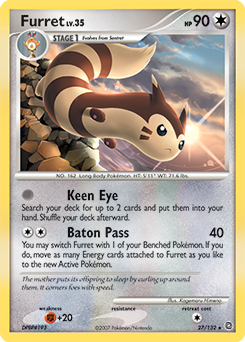