I got into actual play this year, along with my girlfriend, after a ten year stretch of not playing at all. We are both 18, so yay for Masters. I have this weird personality quirk where I will refuse to play anything that is currently “the best” so when I went to choose a deck, I immediately threw out anything SP based. Instead, I went with an “under-turtle” (bad pun groans go here) deck, BlastGatr. Nicknaming my particular build of it “Snipestoise”, I’ve done decently enough in my three battle roads so far. The list is nothing too special, and the exact counts are just personal choice. I work at a grocery store (Who are “the people in your neighborhood”), and as luck would have it, had the midnight shift the night before. I went to bed at 1am, and got up at 5:45 to drive three hours. Ironically, this was my best BR of the three. Seems sleep is inversely proportional to winning. So, on to the list:

pokebeach.comFirst Round: Vs. Electivire FB / Shaymin / Garchomp C
My opponent was younger than I. He apparently had a better deck, but left it at home, and threw this deck together from his binder. Sucks, it has happened to me before too. My starting hand contains an Uxie and a Squirtle, so I play down the Squirtle, and hope not to get donked. He starts with a lone Electivire FB. He “wins” the coin flip, draws, and passes. I thin out my hand, then lay down the Uxie. From there, I draw into a Pokémon Collector and get set up fairly quickly. I get Floatzel GL and the level X set up on my bench (thank you free retreat) as a precaution, but he has trouble doing much of anything.

He manages to get the Garchomp C LV.X out, but by then, I’ve practically won already. Six kills, six “Hydro Launchers”. In the end, the only kill he got was an Uxie, so Floatzel was kinda pointless.
1-0

Second Round: Vs. Sorta-Mirror
My second opponent was an older player, and she was running Blastoise UL, Starmie RR, and Floatzel UL. Just like last round, I set up quickly, with an Uxie in my starting hand. This time I use the Blastoise PL, and thanks to Buizel and Totodile having low HP, swing two “Dual Launchers” for 4 Prizes, with an “Aqua Press” in between. She manages to get her own Blastoise UL up, but by that time, I’ve killed her Floatzels, and she has no way to get enough energy. Turns out she was running a 4-4-4 Blastoise UL line.

Third Round: Vs. DialgaChomp with 1-1 Blaziken FB
This guy was awesome. He had an amazing Drifblim hat, and it looked perfect. He gets an amazing start as is common with SP variants, and sets up well before I do. I get Blastoise PL out, but he sprays my Dig Wells and my two Uxie drops. I manage to take a whole 1 Prize. (He ended up winning the tournament.)

pokebeach.comFourth Round: Vs. Typhlosion Prime / Ursaring Prime
This one was by far my favorite match. He gets a bad start, and is able to get Ursaring out, but not the Typhlosion. He does not run Rainbow Energy, so I simply sit there, taking the 30 damage a turn, while using Blastoise UL to snipe his bench for easy prizes. He finally draws into the Rare Candy and Typlosion, but by that time, I had Floatzel GL protection on the bench. He made the mistake of erasing my Dawn Stadium with a Broken Time Space, so when he killed Blastoise UL, I simply played it back entirely thanks to “Water Rescue”, used Rain Dance to get the four energy, and sniped again. He killed Blastoise twice, but by then, I had enough of a prize lead to win. Amazingly fun match.

And that was it. We had one person short of a Top 4 cut, and I got third. I got two packs of Undaunted, and the shop owner was cool enough to let us trade them for any other set. I picked up two Arceus boosters instead, but didn’t really draw into much. Still, a very fun day. After the event, I hung out a bit and traded some, in my quest to build my girlfriend a Charzard AR deck.

So, I’m always open to new ideas, comments, and suggestions. Pull no punches. If my deck is missing something obvious, feel free to throw it at my face, hehe. 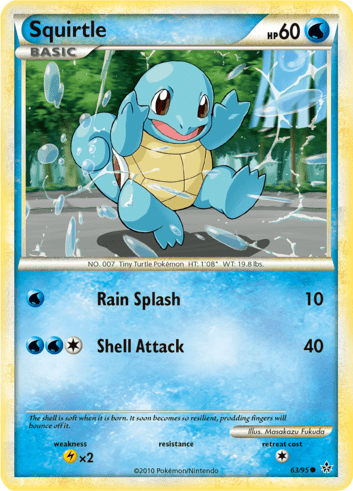