pokebeach.comAbsol G LV.X come straight from the COTD Request Thread. The thread is going great, have gotten a lot of suggestions, but remember there’s only 365 days a year; I will be able to get to everyone’s suggestions eventually.

Ok, back to the card. Absol G LV.X is a basic SP LV.X, which is great because it fits great into the SP engine. 100 HP is a bit on the low side, but being dark is great because you can abuse Special D Energies. The x2 Fighting weakness hurts because of Promocroak and Donphan. Machamp will already 1HKO you. The -20 Psychic weakness is nice because of Gengar SF’s popularity and the Retreat Cost of 1 isn’t bad, but free would have been nice.

Its Poké-Power, “Darkness Send,” is a coming into play Power that lets you flip 3 coins. For each heads, the top card of their deck is sent to the Lost Zone. I’m sure that when a few players saw this card, they thought “Let’s mill out their deck!” and quickly built a deck around Absol’s Poké-Power. However, there are a few problems with that strategy.

The first, is that you flip 3 coins, meaning you’ll only discard 1-2 cards on average. Second is that, since it’s a Poké-Power, it can be “Power Sprayed”. Overall, when putting this card into a deck, I’d consider it’s Poké-Power to be more of a nice bonus than the reason you put it in your deck.

Absol G LV.X’s attack, “Darkness Slugger” for DC (D and an Energy Gain) will do 30 damage. If the attack stopped there, most of you would stop reading this review. Thankfully, it does not. It says that you may discard a card from your hand. If you do, the attack does 30 + 30 damage, so you’re hitting for a solid 60 damage, more if you use Special Darks.

pokebeach.comThis card used to be called a “Poor Mans Luxray GL LV.X,” but hey, didn’t Dialga G LV.X used to be called that too? The way I see this card being most effective is as a VileGar tech. There are a lot of reasons I think this. First of all, it has a -20 Psychic resistance, meaning your opponent will have to hit 4 Trainers in your hand.

Second, it is a Dark Pokémon, so it hits Gengar SF for weakness, so with 2 “Flash Bites” or 1 “Flash Bite” and a Special Dark will 1HKO it. Lastly, it’s attack let’s you discard a card from your hand, which can help limit your trainer count in your hand, which will not only help limit Poltergeist’s damage, but will lower your hand size to make your “Set Ups”, PONTs, Copycats a bit more effective.

Recommendation: If you run a LuxChomp, Sablelock or any other SP deck and are looking for a VileGar counter, but just don’t know which is best, think about what hurts your list more, the Gengar 1HKOing all your Pokémon with no return KO for you or the trainer lock. If it’s the lock, go with Blaziken FB.

If you want to win the Gengar war and limit it’s attacking power, try Absol G out. I think this card is a pretty effective VileGar tech, especially if your deck already runs Special Darks. You’ll only know through testing, so try experiment with it, that’s the only way you’ll know what works best for you.

Rating: 3.5/5 ( A card that seems like it would be good as a VileGar tech, but only time will show it’s usefulness.) 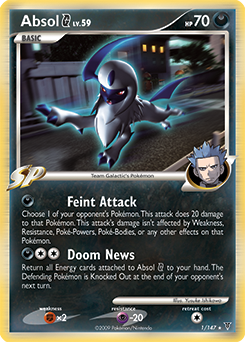