When I first saw Kyogre-Groudon Legend (KGL), I saw its second attack and thought, “That goes perfectly with Delcatty!” Through extensive play testing, I discovered that most of the time I end up losing by not being able to draw a card at the beginning of my turn, or losing key cards and auto-losing immediately. That’s when I saw Mega Tidal Wave. It mills, and it can even draw prizes.

However, it’s a Legend. It lets your opponent draw 2 Prizes when they Knock it Out and it’s not consistent, so certain cards are necessary to add consistency to a KGL deck. Here is the list. Thanks to Bullados for the idea and most of the list:

Here is an analysis of the specific cards in the deck:

pokebeach.comFeraligatr: If you manage to speedily get Feraligatr out with Rare Candy or Broken Time-Space, then you have a fast way to attach energy to a legend so that it can attack on the turn it is played. For an early Mega Tidal Wave, or once your KGL is Knocked Out and you bring it back, this is important.

Sableye: It was tough to decide between Jirachi and Sableye, but I decided on Sableye. The main disadvantage of Sableye is that it has to go first, giving your opponent a full trainer turn. But if Jirachi goes first, it is useless, so I decided on Sableye. With Sableye, I usually use Impersonate to get a Pokémon Collector. But if I already have the Collector in my hand, I get a Bebe’s Search. I run four so I ideally start with it.

Unown Q: This is to attach to Uxie to give it free retreat. If you run Uxie LV.X as a tech, you can bring up Uxie with Unown Q attached when your KGL is Knocked Out, level up, and free retreat into your next attacker.

Kyogre & Groudon Legend: Now some of you already know why I run 3-1 KGL legend halves instead of 2-2, but some of you may be wondering, “How is that possible?” I was confused the first time I saw somebody using a 3-1, but now I get it. When your KGL is Knocked Out, you bring up your Uxie with free retreat (thanks to Unown Q), use Pokémon Rescue, get back the bottom half, and play it with your top half that you have in your hand onto the bench, retreat Uxie, “Rain Dance” all of your energy to KGL, and use MEGA TIDAL WAVE!!! As said by the author of “Legend Box Bonanza”, this attack deserves to be announced with a loudspeaker.

Pokémon Collector: This is a staple in most decks with few exceptions.

Pokémon Communication, Bebe’s Search, and Luxury Ball: These cards can search out your legend cards.

Super Scoop Up: These are so you can hopefully reuse your Uxies.

Broken Time-Space, Rare Candy: These are so you can Feraligatr out quickly.

Warp Point: I use this mostly when my opponent “Bright Look”s my Feraligatr.

Flower Shop Lady, Pokémon Rescue: These are so you can recycle your KGL and your Feraligatr.

Vibrava RR: Its first attack counts the energy cards in your opponent’s discard pile (that you hopefully discarded with Mega Tidal Wave) and does 20 damage for each of them. Then they get shuffled into your opponent’s deck, giving you more energy to discard with KGL and do more damage.

pokemon-paradijs.comFlygon LV.X RR: This mills like KGL. Not as forcefully it but can counter some LV.Xs and mill at the same time.

Uxie LV.X LA: This can help you draw more cards.

Cyrus’s Initiative + Chatot G: If you included this, your deck would be disruptive at the beginning of the game, not letting your opponent drawing into good cards and removing them out of their hand, and then they lose half of their deck and lose. This would give KGL a more Sablelocky feel.

Special D Energy: This would enable you to donk with Sableye.

A 2-2 KGL line: If this is what you are most comfortable you can change to this.

LuxChomp: Luxray GL LV.X does 120 damage with Flash Impact and 140 damage with Trash Bolt. Just a “Flash Bite” with a “Trash Bolt” can 1HKO your KGL. In this matchup, try to get off a couple “Mega Tidal Wave”s and then use your Feraligatr (who does NOT have a lightning weakness) to take your 6 Prizes (no pun intended Adam). The great thing about your SP matchup is that if they lose an Energy-Gain here, a Poké-Turn there, it causes massive problems late game. One thing to be aware of in this matchup is to keep energy attached to Feraligatr. They might use Blaziken FB (if they run it) to “luring flame” your Feraligatr. You won’t be able to use “Rain Dance” you to attach energy for an easy knockout or to retreat. If you keep energy attached they probably won’t luring flame you. They can also “Dragon Rush” you Uxies.

DialgaChomp: Deafen Lock is tough but if you can get off a couple of “Mega Tidal Wave”s you have a good chance. Feraligatr is also helpful here and beware of “Dragon Rush”!

VileGar: This matchup is tough but playable if you take advantage of Sableye’s “Impersonate”. Try to get in as many Impersonates as humanly possible without sacking all your prizes. When your first Sableye gets Knocked Out, bring up another one. One tip is to use Bebe’s to hide your trainers. They will 1HKO your KGL if you have five trainers in your hand so be aware. Use Uxie to KO Gengar and avoid Fainting Spell. Maybe risk your Feraligatr for a few prizes. This matchup is pretty unfavorable.

Well, that’s my first deck analysis that I wrote in second period English class this Friday. Peace. Remember that this is not really a competitive deck, even though it wins a lot. Enjoy this for league, and maybe Battle Roads, but don’t blame me if you don’t make top cut at Nationals with KGL. 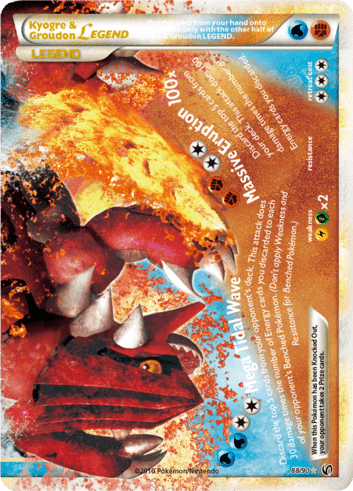