pokebeach.comStaraptor FB LV.X is a very interesting card (skipping the intros today) that a lot of people don’t reconize as being so. Staraptor FB LV.X right way gets the bonus of being an SP, meaning it can (ab)use the SP engine, which is always good. How will it help you? It has a Poké-Power and an Attack.

Staraptor is has a low 100 HP, a terrible Lightning weakness, a nice -20 Fighting resistance and a great Retreat Cost of 0.

First off, is its Poké-Power “Fast Call” which lets you search your deck for one Supporter card each turn and add it to your hand. I’m sure you all can see how it could be useful in an SP deck. Staraptor can start your Cyrus’s Chain or get an Aaron’s from your deck mid-game without forcing you to fish it out with Cyrus’s, thus breaking the chain. It also allows you to play certain supporters in lower counts because you are able to fish the one you need out of the deck.

Which is better, Cynthia’s Feelings, Professor Oak’s New Theory or Copycat? I’m sure I’ll get a lot of different answers (I personally prefer PONT). With “Fast Call”, you could play one of each so you always can have the one you need. Pokémon KO’d last turn, get Cynthia’s, opponent have a 10 card hand, get Copycat, opponent have a 3 card hand, pick PONT. The possibilities are endless. Note: You could remove one of the above cards in favor of Judge if you like.

It even boasts a nice attack, Defog with for CCC (DCE + E-Gain) will do 40 damage. However, if there is a stadium in play, it does 70 damage instead. This will allow it to 1HKO Garchomp C LV.X, which is excellent, making it an effective Garchomp counter.

The biggest drawback of this card is the x2 Lightning weakness. In one way, Staraptor FB is great for the mirror, but the weakness makes it much worse. Overall, it’s a nice engine that’s great for nearly all match ups apart from LuxChomp, where it could be liability.

Staraptor has replaced Uxie LV.X in a lot of decks, which most say is a good thing. However, doing this helps a lot of matches, it hurts your Machamp match.

Rating: 3.25/5 (Good card, but with Luxray GL so popular, I’m doubtful to its use in the LuxChomp match.) 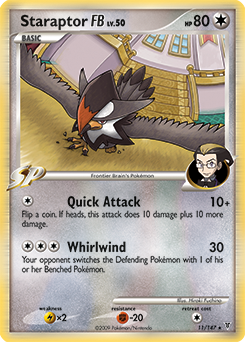