pokebeach.comHey guys! Peter Bae here today to do a Card of the Day article. Obviously stated in the title, the card today is Rescue Energy that has been released in Triumphant. So why is this card worth mentioning? Let’s go on ahead and find out!

Rescue Energy is a new type of Special Energy that was just recently released, and probably one of the greatest cards for stage 1 or 2 decks to compete on an even level with SP variants. Like most of the Special Energies, it provides 1 C Energy on the attached Pokémon. However, the effect of the card is that when the Pokémon with Rescue Energy attached is Knocked Out by damage from an attack, instead of going to the discard pile, the Pokémon is sent to your hand (all attached cards are discarded). WHAT?! This card gives you an instant recovery after being Knocked Out by damage! This card brings all stage 1 or 2 decks to a new level and probably going to see play in almost any stage 1 or 2 deck.

Like always, whenever something good walks in, you can’t help but wonder what are the bad things that come along with it. Rescue Energy, a great card, also has pretty bad drawbacks. First of all, the Pokémon has to be Knocked Out by damage from an attack, which means that placing damage counters (Gengar SF mainly), Poké-Powers (Crobat G’s “Flash Bite”), and knock outs by conditions will render the card useless.

However, I firmly believe that the pros of this card outweighs the cons greatly and it is definitely a card that will see play in all stage 1/2 decks and even some SP decks. Just imagine you finally Knock Out that Gengar SF with Uxie to avoid “Fainting Spell” only to see it again next turn with the help of Broken Time-Space. Or how about having to Knock Out the same Gyarados over and over again. 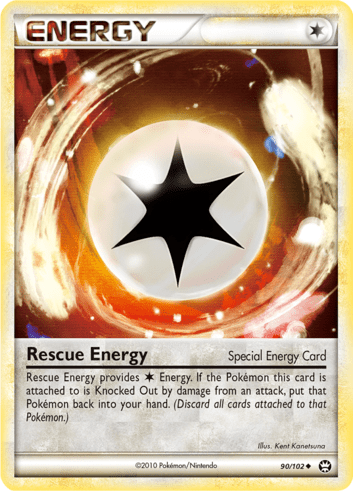