As revealed in the Meet the Staff (that Didn’t Quite Make it to the Underground) article, I have had an irresistable, magnetic attraction for Magnezone ever since I started playing. Although I can’t fully explain this electromagnetism, it might be due to the following:

* It was one of the first LV.X cards I ever drew in a Prerelease tournament, and it was love at first sight.

* It is an incredibly versatile deck, perhaps more than any other build. Options are great!

* It is a Stage 2 evolution, and I’ve always had a bias for the big dogs (probably something to do with being a Pokédad)

* It is very challenging to master, probably similar to the Arceus build.

* It does not see common play. I avoid the word “rogue” even though Sarah Palin would probably approve. I generally don’t like running top tier-published decks and would rather lose with a unique deck (which might explain why I didn’t finish in the top 500 at Nationals). But I love beating top tier decks with something they aren’t used to seeing. I played Jumpluff/Vileplume this past Battle Roads and ended up with a winning record and beating all the top decks at different points. Some players just like to win; I like to win (and lose) with style.

Before diving in to this article, I have to make a confession. The truth is, I’m not an expert, Underground-quality player, and probably never will be. (Act surprised. It might make me feel a little better.) However, I would argue that I am an expert Magnezone player and have probably logged more tournament and testing hours with it than just about anyone else in the past 2 years. Unfortunately, Magnezone just hasn’t been fast enough for the recent metagame, and I had to reluctantly and gingerly place him back in our binders for Battle Roads. However, with the Triumphant release, I’ve seen some electrifying potential and polished his metal finish one more time. And I’m convinced this is his time to turn on the power in the current format.

For those of you wondering what makes Magnezone such an amazing deck to play, here are a few things that I think make it such a great option:

* Type changing. You can evolve into either a Steel or Lightning Magnezone, giving you a type advantage when needed.

* Power build. I can’t think of another deck that is better at growing stronger as the game progresses. In fact, I would argue that it is darn near impossible to win a match against Magnezone if it gets fully set up.

* Metal Tanking. Magnezone can take advantage of damage reduction through the use of Special M Energy.

* Plethora of Poké-Powers. It’s a blast to use 4-6 Poké-Powers in 1 turn and watch your opponent’s frustration.

* Play options. Magnezone has so many options and can adapt to different game scenarios. For example, it can:
– Snipe your opponent’s benched Pokémon
– Hit and switch (and keep a trainer lock on)
– Paralyze with the Level X
– Dish out massive damage with Magnezone Prime

Magnezone – Gotta Catch ‘Em All! But You Can’t Play ‘Em All!

One of the challenges when building a Magnezone deck is deciding which ones to use. I have no idea why they have created so many (one of those Pokémon empire secrets), but it does present some challenges. My article will focus on the following 4 Magnezone:

This Metal monstrosity is extremely helpful in setting up your Magnezone
by using its “Magnetic Search” Poké-Power to search for any Lightning or Metal Pokémon each turn. He also has a couple of decent attacks, one of which lets you snipe for 30 damage.

This supercharged Pokémon is essential in Magnezone’s energy recycling abilities. It also has a switch attack for LCC that does 60 damage.

The newest addition to the Magnezone family, Magnezone Prime has a great Poké-Power called “Magnetic Draw” that lets you draw cards until you have 6 in your hand. It also has a devastating “Lost Burn” attack for LC that does 50 damage times the number of energy cards you have in play and place in the Lost Zone. Although very costly, it can effectively Knock Out even tank Pokémon.

It’s just Magnezone LV.X. What more do you need to say? This guy’s “Electric Trans” Poké-Power allows you to move Lightning and M Energy around to any of your Pokémon as often as you like. It also has the “Cyber Shock” attack that dishes out 80 damage and paralyzes your opponent’s active Pokémon.

Here are explanations of some cards in this deck:

pokemon-paradijs.comSpiritomb.
The primary setup Pokémon in the deck. A perfect start would be Spiritomb active with a Call Energy and 1-2 Magnemite on the bench. He can also be used later in the game to maintain a Trainer lock with Switch Magnezone.

4/3/4 Magnezone line.
I like the Stormfront Lightning-type Magnemite the best. Magnemite are just plain wimpy, and you have to pick which one is the least bad. I also like the Stormfront Steel-type Magneton as it has a couple of attacks that can be useful in some situations. And I’ve explained the Magnezone in other sections. I choose to run 3 Magneton in order to balance the Spiritomb evolution attack and its Trainer lock effect that prevents Rare Candy.

Azelf.
With running so many unique Magnezone, it’s important to be able to grab any one of the 4 that might be prized.

pokemon-paradijs.comSmeargle/Unown Q.
A second set up card that comes in handy, especially when facing Sablelock.

Regice.
A way to force your opponent to switch Basics when needed and to discard unneeded cards or energy in order to maximize Magnezone Prime’s draw power and Search Magnezone’s energy recycling powers.

Warp Energy/Seeker.
These give Magnezone the ability to switch and heal when needed.

Expert Belt.
Gives some extra damage potential, especially with Magnezone Prime’s attack to put 2 energy in the Lost Zone and dish out the magic 110+ damage to KO most SP LV.X cards.

Here are some pro Magnezone moves to give you the ultimate edge in matchups.

pokegym.netMagnezone Prime’s Lost Burn.
There are 2 key times in a match to use Magnezone Prime’s Lost Burn attack. The first is when your opponent gets off to a great start and has a powerful, active Pokémon ready to dish out mega damage each turn. In this situation, it is worth giving up 2-4 energy cards to KO this Pokémon in order to slow your opponent down. The second time is closer to the end of the match in order to KO your opponent’s last 2-3 Pokémon in order to secure the victory, as you won’t need to keep the energy in play.

Warp Energy/Seeker.
These cards are absolutely devastating in this deck! With these cards, you can pull off some incredible moves, including:

* Poké-Power Reuse. You ideally want to save your Seekers for healing, but you can also use Seeker to reuse other Poké-Powers. For example, you can scoop up a benched Uxie and “Set Up” again. Or, if you are needing 2 energies out of your discard pile, you could use “Super Connectivity” for 1 energy, scoop the Switch Magnezone with Seeker, put it back down with BTS, and Super Connectivity again. Or, if you absolutely needed 2 Metal or Lightning Pokémon, you could use Seeker to reuse Search Magnezone’s Poké-Power.

Switch and Lock.
Use the Switch Magnezone to attack and switch out with your Spiritomb each turn, thereby keeping the Trainer lock on your opponent. This is especially helpful against SP decks.

Shock.
Use Magnezone LV.X’s Cyber Shock attack to damage and paralyze your opponent at key times in the game. This can help you stall while getting set up.

pokegym.netSnipe.
Use the Search Magnezone’s “Speed Shot” attack to Knock Out a damaged benched Pokémon or to start damaging your opponent’s benched Pokémon when they send up a sacrifice Pokémon.

Judge.
Judging your opponent’s hand can be very effective and can help you immensely when combined with Magnezone Prime’s draw power. This is also effective with Spiritomb to keep your opponent from resetting with Trainers.

SP Builds – Favorable.
With the Trainer lock on, this deck can do very well. However, you have to get your Spiritomb out quickly and start the set up. Seekers and Warp energy help out tremendously in this matchup to heal, and Magnezone Prime is helpful to deal out 110+ damage when needed. Be careful for Blaziken FB LV.X as it can really hurt Metal Magnezone.

Gengar/Plume Lock – Favorable.
Both decks can set up about the same, but Magnezone has a much stronger ability to reset with Search Magnezone and Magnezone Prime’s draw power.

Gyarados – Even.
Both decks are very powerful, and the key to victory will be using your Lightning-type advantage.

Other Stage 1/Stage 2 – Favorable.
As I stated near the beginning of the article, it is just hard to stop Magnezone once it sets up. If your opponent is also playing a setup deck with Stage 1s or Stage 2s, you will likely win the match as the draw/search/energy recovery abilities in the deck will simply overpower your opponent as the game progresses.

With the new Triumphant additions, Magnezone is now fully charged up and ready to take City Championships by storm. Don’t be shocked to see him hovering his way to the top and attracting a lot of attention. 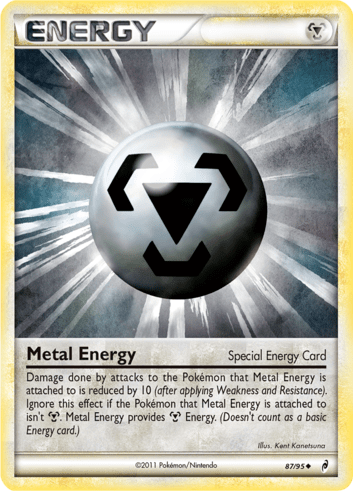