Welcome to today’s Card of the Day. I’m working hard on releasing them more consistently. Today, I’ll be reviewing a card from the COTD request thread, Hoppip HS. Yeah, I know… Well, let’s see what we have here.

pokebeach.comHoppip is a Basic Grass Pokémon with a terrible, very donkable 30 HP. It has a x2 Fire weakness, which hurts because Blaziken FB hits you for weakness. The -20 Resistance is great, resisting Machamp Prime, Donphan Prime, Machamp SF, and Promocroak. The Retreat Cost of one sucks, but it’s manageable.

Now, here’s me telling you that its weakness and resistance will be irrelevant 99% of the time: Hoppip is a 30 HP Basic Pokémon, which means that even without its weakness it’s 1HKO’d by Blazikent FB’s “Vapor Kick”, let alone the LV.X’s “Jet Shoot”. Just like its weakness, the resistance is also useless; Donphan Prime and all of the others will still 1HKO you. However, there may be a rare use for these stats, so we won’t write them off completely (not that I can actually think of one now, but that doesn’t mean there isn’t one).

Hoppip has no Poké-anything, but it does have an attack. Is it good enough to warrant Hoppip some play? Well, I don’t know. “Bounce”, for G, does 10 damage with the option of switching it to your bench, which is nice for escaping the more dangerous active slot. However, by far the biggest reason you would want to play Hoppip is for getting out its Stage 2 Evolution, Jumpluff. Seeing as it’s the only Hoppip in the format, you don’t have much of a choice if you want to run Jumpluff.

Rating: 3/5 (It has terrible HP, but the attack is kind of useful… sometimes)
Other rating: 5/5 (By Hoppip standards, it’s by far the best Hoppip in the format)

Yeah, I know it was a short review, but there isn’t much to say about Hoppip HS. 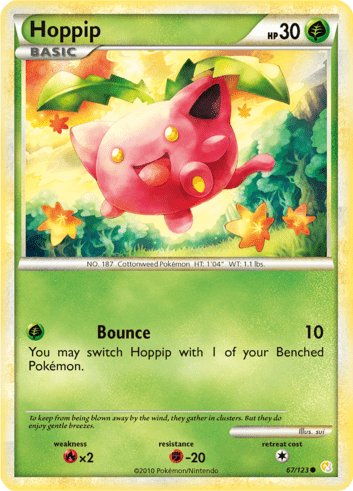