…Machamp only has one attack.

I’ve played this deck at one Battle Roads and I won, so it wins 100% of the time, right?

I have been testing with Triumphant cards, but I’m not completely comfortable with them yet, so I don’t want to lure readers astray with a misguided list. Below, however, I’ll mention some Triumphant cards that are more than sufficient items for space priority in the deck.

* Pokémon Rescue will be debated, I know that. It mainly acted as my 2nd Ditto and 4th Machamp.
** Double Colorless Energy is for Machamp’s “Rage” and the LV.X’s “Strong-Willed”.

1 Palmer’s Contribution
Can grab an entire Machamp line, plus energy. Can get Umbreon back in VileGar matchups.

pokegym.net1 Machamp Prime
Replaces the LV.X obviously if you add it in. Good card. Works very well when used in a combo with Seeker. Allowing you to come in Swinging with the Prime, and scooping a damaged SF Champ. Don’t be fooled though, it’s good alone too. Discarding Special Energies is nice, and an attack with a base higher than 60 isn’t too shabby for a Machamp either.

2 to 4 Seeker
Very versatile, and we love versatile. Downside is (this) Machamp has no bench control. Most of the times you play this, your opposition will be able to benefit as well.

1 Regice LA
Helps with dumping trainers against Poltergeist, and getting out of early Spiritomb locks. Bad if started with, but there is a relatively slim chance of that.

1 Smeargle UD
Would replace Chatot. Depends on which kind of support you want. Portrait is quicker and does not use your attack, but unlike Mimic, obviously cannot be used while power locked.

1-1 Luxray GL LV.X + Poké Turns
Is there anything this isn’t ever an idea with? It’s simple here. “Bright Look” a basic, KO it, Poké Turn and repeat.

2 to 3 Cyclone Energy
Gyarados heavy in your area but still want to play Champ? You may want to look at this card. How often do you see an evolved Pokémon on Gyarados’s bench? Almost never. (Blissey Prime is the only I can think of, and is bleh in Gyarados anyway with SSU and Seeker being available.) Move the tank, get the KO.

pokemon-paradijs.com1-1 or 2-2 Lumineon (along with 2 or 3 Warp Energy/Point)
When partnered up with Seeker, this can be a guaranteed KO. Warp back to Lumineon. Use Seeker, Fin Luster that Basic Pokémon, free retreat to Champ, KO.

Additional 1-1 Umbreon Prime
The problem here is I don’t want to mess with the consistency to slightly improve an already bad matchup…I’d rather have the 30-70 than the 35-65, and I’m hoping I’m in the majority in thinking that.

Early Game – Favorable
Obviously this is in your favor. LuxChomp has no trainer locking aspect, so your road to the first Machamp or two is clear of obstruction. Worst case scenario is them getting a Call Energy in play turn one and get three SPs in play. Even if they do this, you have outs. You can Pokémon Collector for multiple Uxies, and you can Super Scoop Up Power Sprayed Uxies and give them another go.

Mid Game – Favorable
Once this game gets to the mid stages, you should have decent board control. With a few Machamps up, running over their field should be pointing you to victory. One of the most important things to avoid mid game is overextending. The other guy is the underdog, and you should be being patient. Don’t force anything; keep the Machamp swarm rolling. No need to look for Ditto or Umbreon here… although a Ditto “Dragon Rush” can occasionally net you something cool.

Late Game – Slightly Favorable
If you reach this stage of the game, it may be close. If the SP player can survive the initial Champs, they might be able to give you a run for your money. Start watching your resources real closely. Losing a Champ with no recovery could spell defeat. Against SP, Pokémon Rescue shines as your primary recovery. It allows the fourth Machamp to come out quicker, and doesn’t force you to waste a Supporter on recovery.

Early Game – Favorable
Again, this is an SP matchup, thus it’s in your favor. They may get a Trainer/Stadium lock going with Deafen early, but that’s actually OK. Let them do 10 damage each turn. Most Dialga builds right now seem to be playing one to zero Expert Belts, so 10 will probably be the max damage output should they try to abuse Deafen. If they take this route, manually evolving is the only way to get to your Machamps, but you currently have time.

Mid Game – Favorable
Once you get a Machamp out, it should be lights out. Get a quick KO on a Dialga and continue to run their field. Once you break out of the trainer lock, you should have a plethora of options available to you. Abuse that and just rush Machamps. Keep Garchomp targets to a minimum.

Late Game – Favorable
You shouldn’t be reaching this stage in this matchup too often. If you do, you should still be okay. Keep a Machamp up, and they should be gasping for resources to even get close to KOing it.

Early Game – Even
Early game Sableye may be able to shake you. With enough disruption to slow any deck down and flip any matchup, you will have to plan your steps carefully. Watch the SP count; make sure to grab multiple Uxies if needed. You need to try to force the issue first. While Sableye may be a very tough deck to play, playing against it with Machamp (as most other decks Champ plays against) turns into a one attack fest.

Mid Game – Favorable
If you survive the attempts to nuke your hand early game, you should be able to take control here mid game. They are going to be fighting for ways to get a KO on you. You need to make sure to keep Garchomp KOs off the table. Sableye/Garchomp’s damage output is poor, and if you’ve got a couple Machamps up, you’re golden. Some of these decks have cut down to 2 Judges/2 Initiatives/1 VS Seeker, and if you’re getting a KO every turn, performing their tricks this long is not going to happen.

Late Game – Favorable
Another matchup, that won’t get into a “late game” situation very often. If you’ve reached this point, one of the two decks are struggling. Not too much to say about this matchups late game besides, “Take Out.”

Early Game – Unfavorable
This is going to be rough. Most lists are playing four Spiritombs and four Gastlys (correct if you ask me). The odds of them starting with one are rather good, meaning Trainer lock turn one. Machamp doesn’t like trainer lock; in fact, he hates it. BTS is the route to go here. The inflated Bebe’s count helps in this match… but you’re not searching for Machamp early…

Mid Game – Very Unfavorable
You’re looking for Umbreon Prime and Ditto LA. These give you a tiny shot against the Ghost. Umbreon can deliver the first blow, then be immune te next turn, allowing Ditto to sweep in for the KO with a Shadow Room to dodge Fainting Spell. Remember Gengar/Vileplume is a little slower to start than most decks, also meaning it’s slower to recover. If you can get one maybe two KOs with Umbreon/Ditto you could make it a match…

Late Game – Very Unfavorable
Outside of Vileplume (which they will never promote after a KO), besides Gengar they have no evolutions. This frees up your Machamp to sweep. The problem with this is two fold though. Have you really been able to set up Umbreon/Ditto and a Champ through constant trainer lock? Are you too far behind in prizes? This matchup can go south as early as turn one. It is important you capitalize on every mis-play and bad start against this deck.

Early Game – Favorable
Now I have down favorable here, but that can quickly change to a slightly skewed Even, if they play/start Smeargle instead of Sableye. Your dream against a Gyarados is this: They start Sableye, go fist, have no other basics, and Impersonate for junk, and you get the donk the following turn. Unfortunately, even if they have no other basic, but start Smeargle, they can get out of your one advantage pretty easily. Portrait finds a Collector or Bebe’s T1 pretty often when used against this deck, allowing them to breathe and take time to collect their precious fish.

Mid Game – Slightly Unfavorable
Yuck, mid game against Gyarados is a pain. Double Colorless is your hero here. Well if a hero could also be failing… Machamp can make it through a “Tail Revenge.” In fact… a Tail Revenge puts Rage at the magic number. 90+60 = 150 – 20 = 130. That math my friend is a KO on a Gyarados. The problem is, they’re going to have the recovery here 99% of the time. And they can churn out 130 HP beast faster than you can churn out your Take Out food.

Early Game – Even
Spread’s tough, and besides Abomasnow, not sure how it will be played. I am fairly certain though that it will be played with the new Solrock. Against a Gallade 4 spread deck though, it turns into most SP matchups where you just race to take SixPrizes.com in six turns.

Mid Game – Slightly Unfavorable
Against Abomasnow, you will be struggling. Umbreon can’t protect your bench, and Machamp SF is weak. Machamp Prime looks good on paper against this matchup, but I’m still in my initial spread testing to give much more detail than that.

Late Game – Unfavorable
Getting to late game is something Spread loves to do. Take multiple prizes on a single turn. Again it will all come down to your techs in this matchup. Seeker is huge, SSU can help if you choose to play it alongside Seeker.

Two separate decks that we will beat the same way.. Only difference is the Power Locking of Regigigas.

Mid Game – Very Favorable
Are you still using Take Out?

Late Game – Very Favorable
“Nehmen”, “Sacar”, “Tirar”; these are just a few ways to say Take Out in a foreign language in case you get bored.

Early Game – Even
It could possibly be a race to donk, as you can imagine I’m sure. You will probably be at a stalemate through this first phase of the game, both setting up via one or two Uxie drops and getting one or two KOs for one energy.

Mid Game – Slightly Unfavorable/Very Favorable
This matchup can either be very easy or very hard. It all depends on whether you play Umbreon or not. Umbreon can completely wall Donphan. Granted the KO is going to take FOREVER, but that’s ok because most Donphan lists run NOTHING that can touch Umbreon. They might be able to Reversal around it, that’s about all I can think of

Late Game – Unfavorable/Favorable
The Late and Mid games of this matchup again like most with Champ, are very similar and mesh together. You will want to continue your Umbreon offense if you’re playing him. If not, Strong Willed and Rage will become your safest bets. Ditto can also sneak in and get some cheap damage on Donphan.

All in all, most Metas are pretty open for Machamp to run through them. Popular and successful decks including: Luxray/Garchomp, Sableye/Garchomp, Dialga/Garchomp (what seems like Format/Garchomp) are all very susceptible to Machamp. There are some popular decks that give you fits (Gengar/Vilelpume and Gyarados) and then the rest of the field is right around 50/50. Machamp will be in top cuts and winning Cities this year, so if you’re going to a Meta rampant with its easy matchups, it’s a great deck choice. 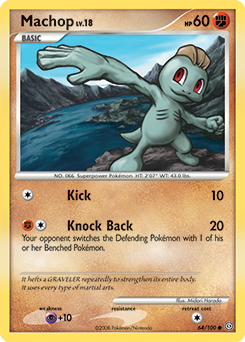