Junk Arm is a Trainer card that was brought to us along with the rest of Triumphant. However, this card stood out from the rest of the set as being one of the better cards. Why, you ask? Let’s find out.

pokegym.netJunk Arm, like I stated above, is a Trainer card, which is good as you can play as many Trainers as you like each turn. However, just like other Trainers, Junk Arm can be locked by Spiritomb, Gastly, or Vileplume. Let’s move on to Junk Arm’s effect.

Junk Arm allows you to return any Trainer card not named “Junk Arm” in your discard pile to your hand. However, in order to do so, you must discard two cards from your hand. This is obviously an amazing effect; being able to retrieve a Poké Turn, Luxury Ball, Pokémon Communication, or any other Trainer is an amazing ability that adds a lot of options to a deck, especially late-game where there are numerous Trainers in your discard pile.

As soon as I finished reading this card, I immediately started thinking of decks and cards that could really abuse Junk Arm. First off, SP decks are able to retrieve an Energy Gain, Poké Turn, SP Radar, or Luxury Ball right when you need. Killer!!

Perhaps the deck that will be able to make use of Junk Arm best is Gyarados. Not only will it allow you to retrieve Super Scoop Up, Poké Turn, Luxury Ball, or Pokémon Rescue, but, since it allows you to discard two cards from your hand, it will really help get those Magicarp in the discard pile as soon as possible.

My recommendation: Try it in any SP deck you make. In Gyarados, I wouldn’t consider playing less than two. I personally have extensively tested out two in my LuxChomp list and I am very satisfied with the results it provides.

Rating: 4.5/5 (One of the best cards in Triumphant that deserves to be tried in almost any deck.) 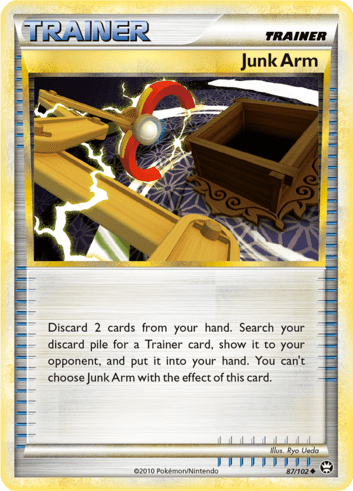