In honor of the many turkeys being gnawed on today, the Card of the Day is our own turkey-looking Pokémon, Dodrio. Entirely overshadowed by its Undaunted counterpart, this flightless bird sees little to no play in the current format.

Dodrio has 80 HP, a terrible +20 weakness to Lightning, and a welcome -20 resistance to Fighting. Also, it lacks a Retreat Cost! How nice! Stat-wise, Dodrio SV is superior to Dodrio UD.

This card has one attack, “Drill Peck”, which does a vanilla 50 for 3 energy. In our format, that is awful, though not the worst. Nonetheless, its real beauty is “Echo Draw”, and that Poké-Power allows you to draw one extra card during the turn.

Noctowl HS has an identical Poké-Power, but a better attack, more HP, and one more Retreat Cost than Dodrio. If you never plan on attacking with the birds, keep in mind that Luxray GL LV.X 1-shots both regardless of HP, so stick with the free-retreater! Similar Pokémon that draw extra cards include Uxie LV.X and Slowking Prime. However, letting you choose which of two cards you want is entirely different from letting your opponent choose, and the latter is possibly worse than just drawing one more card without looking.

Whoever said that Slowking Prime is a cheaper Uxie LV.X is a silly, silly, silly person. If you really want cheap draw-power and you have the room, tech in Dodrio. *Gobble* 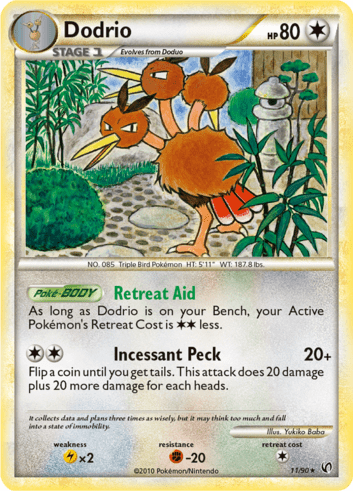