Hey guys! Peter Bae here once again to talk to you about this disruption deck that I made. This deck was talked about a bit in my Oshawa Autumn Battle Road report where I faced Curtis. So the deck is owned by Curtis and I guess whoever helped him make it, and I’m just here to write an article about it as I loved how the deck performed.

So what is the point of the deck? Well, it uses many cards from Undaunted to reduce your opponent’s hand size down to 0 or to just useless cards, then controlling top deck, starving them from resources, and then hitting with medium damage with Houndoom to get easy 6 Prizes or donking them.

Before I start talking about the card choices, this is my build and I have no idea how Curtis’s build was. Obviously, the build can be changed to fit your liking but this has worked out quite well for me.

What do these cards do?!

His first attack, “Fire Counterattack”, for 1 D Energy does a measly 20 damage or 30 with Special Dark. However, the good part is that if your opponent has a Fighting Pokémon in play, it does a whopping 20+60 damage for a total of 80! This can easily Knock Out any Machoke and Machop before they become Machamp, and since you are a stage 1 with 1 attach attack, you will be setting up faster than Machamp. Donphan Prime still spells trouble but the number of Donphan players has decreased. His second attack is what shines though.

His second attack, “Dark Roar”, does an average 50 damage for 2 D Energy, or more depending on whether you have Special Dark or not. The tricky part about this attack is that your opponent has to discard a card from their hand when you use “Dark Roar”. Although, your opponent chooses what they discard, most likely they won’t have an option with their already measly hand of 1 most of the time. (You will want to know why, so keep reading this article)

Weavile UD
This is an awesome card for the deck. The stats are also pretty basic, stage 1, 80 HP Dark-type Pokémon, x2 weakness to Fighting, -20 to Psychic, but no Retreat Cost. So the stats aren’t too bad because of the free retreat. You really do not have to worry about the weakness as this card will never have to attack or be in the Active Spot unless your starter or Houndoom is Knocked Out.

pokebeach.comHis attack “Feint Atack” is pretty mediocre. For 1 Dark and 1 C energy, you do 30 damage to any Pokémon. I guess the 30 snipe isn’t all that bad but not enough for it to be an attacker. His Poké-Power “Claw Snag” is what shines him out of many Undaunted released cards. When you put Weavile down from your hand, you get to look at your opponent’s hand and discard any 1 card from their hand. This is very nice as you can abruptly end the Cyrus chain, drop a vital Pokémon, or energy drought your opponent. And it works very nicely with the theme of the deck.

Umbreon Prime
Umbreon Prime is a card chosen to specifically help against Donphan Prime and further improve your Gengar matchup despite the type advantage you will have. Umbreon Prime is also a stage 1 Dark-type Pokémon. It has all the same stat that Houndoom Prime had (1 retreat, 90 HP, x2 weakness to Fighting, -20 Psychic resistance). Umbreon has an attack called “Moonlight Fang” that does only 30 damage for 1 Dark energy or 40 with Special Dark. It might not be much but the effect of the attack makes up for it. When you use “Moonlight Fang”, Umbreon is protected from all effects of attacks, including damage, from a Pokémon with Poké-Body or Poké-Power. This can give you many turns while you set up or try to rebuild because 90% of the Pokémon in any deck has a Poké-Power or Poké-Body. Umbreon also has a second attack, but if you were to be put in to a spot where you have to use it, you’ve pretty much lost the game.

Sableye SF
This is one of your starters in the deck. Sableye has been proven to be a great card for many decks like Sableye and Gyarados for its donking ability, and the power to fish out any Supporter to use it as its attack. Sableye is a Dark basic Pokémon with an average 60 HP. He has no weakness, which is great, and -20 Colorless resistance is great against Garchomp C and Ambipom G donk. His 1 Retreat Cost is a bit saddening but Unown Q will do the job. He has a Poké-Body called “Overeager”, which makes you go first regardless of the dice roll unless your opponent has a Sableye. So, make sure you do the dice roll regardless of your active Sableye. Going first might sound dumb but his 2 attacks are so good that you can go first and still have an overwhelming advantage.

His first attack “Impersonate” is a great attack that requires no energies; it let’s you search your deck for a Supporter, discard it, then use the Supporter card’s effect as the attack. This is great as you can refresh your hand if it is bad with cards like Judge, while ruining your opponent’s hand, or use draw Supporters like Team Rocket’s Trickery (which will be further talked about). His second attack, “Overconfident”, is an absolutely amazing attack that can potentially win you the game in the first 5 seconds of the game. For 1 Dark energy, it does an unsatisfying 10 damage. However, if the defending Pokémon has less HP than Sableye, you do 40 damage, or 50 with a Special Dark. 50 is enough to Knock Out most of non-SP Basic Pokémon, especially with Gyarados coming back in the format.

pokemon-paradijs.comJirachi RR
Also another starter, but less desirable than Sableye during the very early stages of the game. Jirachi is a Basic Steel-type Pokémon, 60 HP, +20 weakness to Fire, -20 to Psychic, and an amazing no Retreat Cost. Jirachi has a great Poké-Power called “Final Wish” where, if your Jirachi were to be Knocked Out by damage, you can search for any 1 card from your deck. Jirachi’s first attack is also the only attack you will be using as you do not run any Steel energy for the second attack. Jirachi’s first attack, “Detour”, lets you use a Supporter card that you played for the turn again as the effect of the attack. This is awesome as you can potentially drop up to 4 cards with Cyrus’s Initiative to completely cripple your opponent, or use Judge twice in case you got a bad hand, or use any other great Supporter twice.

Slowking HS
Slowking HGSS is also another Stage 1 card that fits perfectly with the deck. He is Psychic-typed, average 80 HP, x2 weakness to Psychic, no resistance, and a disappointed 2 Retreat Cost. He has a mediocre attack that isn’t worth mentioning because you won’t be able to use it. However, his Poké-Power “Second Sight” is what fits perfectly with the deck. “Second Sight” lets you look at top 3 cards from your or your opponent’s deck and rearrange them any way you like. This has very good synergy with the deck as you will be dropping your opponent’s hand count to 0, while controlling their top deck. I chose this over Chatot G as it is once-per-turn Poké-Power, and you don’t have to run 4 Poké Turn for it.

Team Rocket’s Trickery
The main Supporter of the deck. This card was also introduced in the set Undaunted and is probably never going to see play other than a deck focused on discarding your opponent’s hand like this one. Team Rocket’s Trickery lets you draw 2 cards and your opponent has to discard 1. This card wasn’t chosen because of the drawing effect, rather the discarding effect. If you have Jirachi RR active, you can draw 4 and your opponent has to discard 2, which is great.

Cyrus’s Initiative
I’m sure most of you know about this card from the dreadful decks Sablelock or Chenlock. Cyrus’s Initiative lets you flip 2 coins, and for each heads you can choose a card from your opponent’s hand and put them to the bottom of the deck (and you view their hand, by the way). This fits with the theme perfectly as you can reduce their hand size by 2 cards.

Super Scoop Up
Super Scoop Up is a Trainer card that is basically a Poké Turn with a coin flip. If you get heads on that coin flip, you can pick up a Pokémon with all cards attached to it. This is great as you can use it for healing, reusing Poké-Powers like “Claw Snag”, “Set Up”, or just to get Slowking away from the Active Spot.

vs. Luxchomp 60/40 in favor of Luxchomp
Early-game is probably the hardest part with this matchup. If you can get Houndoom up turn 2 doing 50 with discard and get good rolls with Cyrus’s Initiative to drop their hand, the match is basically in the bag. Make sure you control top decks so they don’t top deck into Bebe’s for an Uxie. However, LuxChomp will still have the advantage with their fast recovery and their ridiculous speed as they will most likely attack before you will get the chance to set up properly.

vs. DialgaChomp 60/40 in favor of Weavile/Houndoom
I, personally, believe this is one of the easier matchups for this deck. DialgaChomp is a fairly slow deck and if they don’t get a turn 1 “Deafen” on you, you will probably outspeed them and discard their hand away for an easy win. Also, watch out for Promocroak.

pokebeach.comvs. VileGar 60/40 in favor of Weavile/Houndoom
This is your easiest matchup. Spiritomb start is not too bad to deal with as you can easily Knock it Out with Sableye. Your attackers (Houndoom and Sableye) both have type advantage against Gengar. As long as you can keep them away from dropping the Vileplume or Gengar SF, it should be fairly easy.

vs. Gyarados 70/30 in favor of Gyarados
This is probably harder than your LuxChomp matchup. You will be helping them discard Magikarp with your “Dark Roar” and Team Rocket’s Trickery. However, if you can “Claw Snag” their search cards for Gyarados or Gyarados itself, or use Cyrus’s Initiative to do the same thing, you should be able to Knock Out their 1~3 Pokémon on the bench and active for the game.

I know I should post more matchups, but I haven’t been able to play that many decks with this deck. I’ve only tested these ones so far and this is what it felt like. In theory, your Machamp matchup should be easy if you can keep Machamp away, but when they get Machamp set up, it will most likely be 6 turn, 6 Prize loss for you.

So far, with the testing I have done, Weavile/Houndoom has been a very good contender against all the top tier decks. I’ve rarely gotten bad hands, and, even if I did, I was able to refresh my hand by using Judge or just give my opponent a bad hand with my Supporters. I believe this deck can do very well at Cities, Regionals, and upcoming tournaments, and I hope everyone can try it out as it is unbelievably fun to see the faces of those who top decks for 8 to 9 turns with 0 cards in hand. 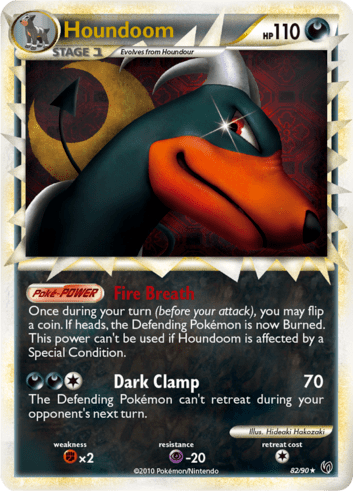