pokebeach.comWelcome to today’s Card of the Day! For today’s review, I thought I would take a break from the usual cards I analyze and instead take a look at a card that I don’t think has ever seen competitive play (well, I’m sure someone was foolish enough) and try to figure out why. The card to be glanced upon is Alph Lithograph from Unleashed.

Since HeartGold & SoulSilver, PUSA has released a card called Alph Lithograph in every set. Each one of these cards were of Ultra Rare stature and came with a very simple effect, such as looking at your opponent’s hand. The one I chose to look at states that, when it’s played, you may “SHUFFLE YOUR DECK!” (I think the “!” after each one is the funniest thing).

Well, that is a very underwhelming effect. If I were to buy a Pokémon pack and pull an Alph Lithograph as my Ultra Rare (which I am happy to say that I have done so), I think I would hit someone. I understand that they’re not supposed to be good and instead be more of a promo, but still.

If you’re looking to shuffle your deck, there are much better options out there that not only shuffle your deck, but provide you with a very helpful effect: Pokémon Communication, Luxury Ball, SP Radar, Energy Exchanger, Bebe’s Search, Pokémon Collector, Palmer’s Contribution, Professor Oak’s New Theory, Copycat, Judge, Pokémon Contest Hall, Energy Returner. Heck, if you run Legend cards in your deck, you could use Legend Box.

pokebeach.comThe simple fact is that, at times, shuffling your deck can be very useful (it’s a great way to counter Chatot G or Slowking), but to play a Trainer that exclusively does so is a very poor use of deck space.

My Recommendation: If you keep them in good shape and wait 40 years when Pokémon isn’t played any more, it’ll be worth a lot of money.
My Rating: 1.5/5 (Definitely overshadowed by 20+ cards in the format) 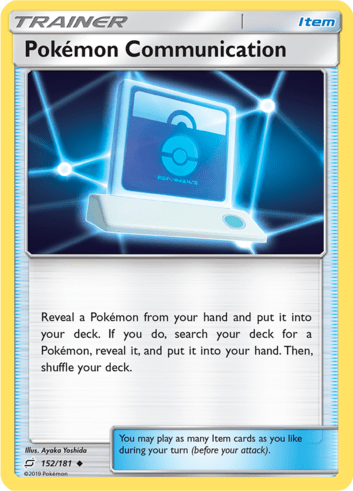