Hey guys! Peter Bae here writing another article! Sorry about the hiatus between this article and my last article. I’ve been running out of ideas on what to write about, and have a bunch of unfinished articles that I just can’t seem to complete. Not to mention the fact that I missed a bunch of Cities because of holidays and that the only cities I went to I ended up going 2-3 with Gyarados.

I want to make this a weekly article topic or just my own kind of article (like what Dakota Streck and Kenny Wisdom do). As you can see in the title, it will be called “Taking Another Look at ________”. You guys can send an e-mail to peterbae6p@hotmail.ca about any cards or decks you’d like to see articles written about… so here we go!

Like I always do, let’s talk about the history of Machamp. For the past season, Machamp was known to be a great card as it easily countered every SP decks out in the format. However, it was seeing little play as it had a mediocre match up against non-SP Decks. Therefore, Machamp was disregarded and was only used as a tech against SP.

Machamp has been talked about enough that I will not be doing a card-to-card analysis in this article, but rather a deck analysis as a whole and why some cards were chosen or included. For Part 2, I will do a card-to-card analysis, match ups, and other lovely in-depth analysis on one of the 3 decks (decided via voting by you readers/commenters).

There have been few Machamp articles and decklists out ever since the release, but, today, there will be not only 1 decklist, but multiples, and analysis for each one of them. Let’s start off with the skeleton list:

Of course, this is the basic of the basics of the skeleton list. You might ask why does the total card difference 14 cards? Well, that’s because Machamp can see varied play as a speedy donk deck, a consistent mid-game powerhouse, or a slow control-based deck!

So let’s first talk about the oldest of the old Machamp, the DonkChamp:

pokebeach.comThis deck has been around ever since the introduction of SP. It absolutely wrecks all sorts of SP decks. The ability to get a T1/T2 Machamp out almost every turn was a a big threat to SP and they did not have many answers to your Machamp swarming.

However, this deck never had any major success during the SP dominant formats due to it having many problems with Stage 1/2 decks. It just didn’t have the fire power to take on beefy, staged Pokémon. There was “Hurricane Punch”, which would do 30 times the number of heads you roll on 4 coins, but there has been many horror stories of whiffing on all 4 coins.

The only reliable way of really dealing out damage consistently was via Machamp LV.X. However, this was truly a double edged sword. The LV.X’s Poké-Body, “No Guard”, lets you deal out 60 more damage at the cost of you receiving 60 more damage also.

So the +40 weakness to Psychic didn’t really mean much as you will almost be guaranteed to get revenge KO’d after playing your LV.X.

The slow Machamp, the LockChamp (I call it that at least):

pokebeach.comAs you can see, LockChamp is just VileGar without the ‘Gar but rather the ‘Champ. Other than that, the only difference you see in the deck is the F Energy and the Judge. In VileGar, Judge is a big No-No as it will get rid of the opponent’s big hand of trainers that they need to dish out a high damage with “Poltergeist”.

However, with LockChamp, you have the option of playing Judge because you do not depend on your opponent’s cards in hand. Also, this Judge is what brings LockChamp to be a better form of a lock deck than VileGar.

While the damage output is significantly lower, you are still easily dishing out 100+ damage mid/late game with the Prime, while getting cheap KOs with Machamp SF’s “Take-Out” early game.

Not to mention the fact that, if you know your Vileplume is going to die next turn, you can use Judge to get rid of your opponent’s huge hand so that they don’t gain a significant advantage of killing your Vileplume to get out of the lock.

Even if you fail to get the T1/T2 Vileplume set up, or even a Spiritomb start, you can still go for a fast Machamp SF set up with your supporters to get some early KO lead. Also, unlike VileGar, it offers a method of healing your Machamps consistently with the help of Machamp Prime’s Poké-Power “Fighting Tag” and Seeker.

pokebeach.comThis is by far my favorite Machamp list I’ve played. Well, I’ve only played the LockChamp and this deck, but yes this is what I chose over LockChamp for several reasons. First, the deck does not depend on a starter, meaning that you have a better chance of attacking T1 with Machamp SF.

If you cannot manage to get rid of an active Spiritomb with Regice T1/T2, you’re already behind. The deck also has a higher chance of getting donked because of the lack of starters and bad active Pokémon, such as the high count of Pixies and Machop (which has +10 Psychic weakness, or x2 if you use the Triumphant Machop).

Of course, there are an infinite amount of Machamp decks seeing play right now, such as the GeChamp (Gengar/Machamp), Donphan/Machamp, and others that I’ve seen floating around the web. However, I believe that these are the big 3 Machamp decks and I wanted to do an article on the ones that I believe are worth talking about.

However, GeChamp has been seeing quite a bit of play and, if you guys want me to do an article on it, comment about it. Like I stated at the introduction, or what seems to be an intro, leave a comment on which in-depth analysis I should do first. (Of course, your choices are LockChamp, DonkChamp, Machamp/Mesprit, and GeChamp since I just told you to.) Thanks for reading!

P.S. I’m really sorry that I cannot get my channel started! I’ve been really busy, and I was away to Buffalo due to sudden vacation, so I missed all cities. Then New Years came around so I couldn’t get a match recorded at league, and I am missing this weekend’s league due to personal reasons. Just wait a bit longer! 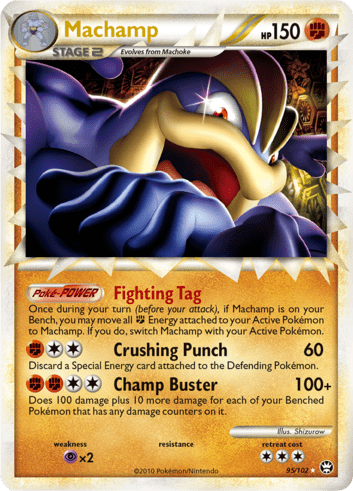