Hey guys! I’m finally writing Part 2 for my very first “Taking Another Look at” series. As you know, Part 1 was a brief overview on the different Machamp variants. I asked all readers and commenters to comment on which deck I should talk about first. Most of you didn’t read that last part, I presume, but LockChamp did get the most votes… like 3 out of 3. Haha!

So, what is LockChamp? I went over it in Part 1, but I’ll go over it again. LockChamp is very similar to VileGar mechanic-wise. It is slow to set up, but very hard to defeat once it gets going. Like VileGar, the ideal starter is Spiritomb. You use your Spiritomb, and other lovely Supporters and Stadiums (Broken Time-Space), to set up your Vileplume UD as fast as possible, then straight on to your Machamp SF or Machamp Prime, depending on your situation.

You may wonder why LockChamp when you can run the speedier, average, unoriginal, speedy ‘Champ like DonkChamp. Well, there are few advantages of running LockChamp. It limits your opponent’s Trainers, giving you an advantage as your deck is designed to run Trainerless. Also, with Trainers blocked, your SP opponents won’t be able to Power Spray your crucial “Fighting Tag”, which makes the deck work. So why is LockChamp better than VileGar?

In my opinion, I find it better because you have 1 attach attack, “Take Out”, with Machamp SF that will Knock Out all basic Pokémon; for mid-late game, you have Machamp Prime hitting for 100+ damage with “Champ Buster”. So in all, LockChamp has a much more consistent damage output than VileGar, which relies on the heavy Trainer count in your opponent’s hand.

Basically what I’m trying to get at is Machamp Prime only needs Seeker to heal itself whereas DialgaChomp needs Garchomp C, Garchomp C LV.X, and Warp energy or any other switching cards.

Well, as of now, there are multiple ways to make Vileplume useless. Dialga G LV.X counters it, Blaziken FB LV.X can 2-shot it (assuming he used “Luring Flame” on it the turn before, and you couldn’t get Vileplume out of the active), Garchomp C LV.X can also 2-shot Vileplume. With the amount of counters, as soon as Vileplume is out of the equation, your opponent suddenly has the advantage of using all the Trainers in his hand.Therefore, if you know your opponent has the ability to KO your Vileplume, why not Judge away their hand?

Enough with the advantages, let’s talk about some disadvantages. So let’s see what we have here… Dialga G LV.X. You have no answers to it once it’s on the field (VileGar has “Level-Down”). NOPE! You have Machamp SF, which will 1HKO any Pokémon SP. I honestly don’t see many disadvantages that this deck has other than the ones that VileGar has, which is the really slow set up and the bad hands.

Spiritomb
Ideal starter of the deck. Almost all of you should know what this card does. His Poké-Body, “Keystone Seal”, locks both your Trainers and your opponent’s when it is active. Not only that, his attack “Darkness Grace” allows you to evolve one of your benched Pokémon and, if you do, you put 1 damage counter on Spiritomb. This card essentially let’s you have a turn one Trainer lock to slow your opponent down while you speed your slow deck up. Without this card, the whole VileGar theory would have never worked.

It makes your opponent have to use a Crobat G’s “Flash Bite” to put 1 damage counter on your Machoke before being able to 1HKO it with “Dragon Rush”. With your opponent Trainer locked, their Crobat G drops have to be more well-timed than when they aren’t Trainer locked because of Poké Turn being out of the option. This will use up a lot of your opponent’s resources early game for you to have an advantage late game.

For the Machamp line up, LockChamp only really has 2 viable options. You can either go 3 Primes and 1 Stormfront Machamp for a stronger late game play, or you can go 2 Stormfront and 2 Primes for a better early to mid game play. 3 Primes and 1 Stormfront allows you to have a stronger healing capability than 2 Primes and 2 Stormfront as you have a better chance of getting out the Machamp Prime. However, because you only have 1 Stormfront, in the early to mid game, it will be much weaker as that is only 1/60 cards in the deck that can do decent amount of damage with 1 energy attachment.

2 Primes and 2 Stormfront is definitely a better choice in my opinion as your weak early game has improved immensely, and you really only need 2 Primes to continuously heal your Machamp.

Vileplume
The heart of the deck, you could say. Vileplume is a Stage 2 Pokémon that you would preferably have sit on the bench for a long time. Vileplume has a Poké-Body called “Allergy Flower” that locks both you and your opponent’s Trainers, like Spiritomb, but it works on the bench.

Uxie/Uxie LV.X
Uxie is your early game draw power to quickly set up your Vileplume with the Poké-Power “Set-Up”. Uxie LV.X’s Poké-Power is a once per turn Pokédex. Not only that, Uxie LV.X is a great card for mirror matches as Uxie LV.X is a Psychic Pokémon and can use Double Colorless Energy to hit for 60 with “Zen Blade”.

Azelf
Azelf, I wouldn’t say, is a must in the deck, but definitely a great help to the deck. Yes, it does sit on your bench after you play it and, if you have to, you can pick it back up with Seeker to open up a bench spot. However, this will decrease your healing ability to only 2 times for the match (assuming your opponent doesn’t play Seeker). I say it is not a must in the deck unless you are running a 3 Prime/1 Stormfront Machamp line.

Almost all of your Pokémon are in multiple copies with the exception of Unown Q, so not having him wouldn’t be as bad as other decks. However, having him greatly improves your consistency and sometimes having Azelf in the deck allows you to fetch any Pokémon with Pokémon Collector. (Search your deck with Collector for 3 Basics, see if you are missing any cards, and if any of your Pokémon, like Machamp SF or Vileplume UD, aren’t there, get Azelf to fetch it!)

Unown Q
Unown Q isn’t as big as it is in VileGar. It is usually run to give your Pokémon with 1 Retreat Cost free retreat. However, with Machamp Prime Poké-Power, “Fighting Tag”, you can just attach it to your active Pokémon, use “Fighting Tag” to move the F Energy to Machamp Prime, then switch places. However, having Unown Q never hurts unless you start with it. I’d say test it out and see how it works.

Bebe’s Search
The only supporter that will fetch you any Pokémon from the deck. I only ran 3 because multiple copies of PONT and Copycat will usually get you what you want.

Copycat
With LockChamp, your opponent will have a ridiculous amount of cards in their hand by the early to mid game. With Copycat, you can easily draw a fresh hand of 8+ cards.

Seeker
Main Supporter of the deck. This card is what makes Machamp Prime work. Seeker is probably one of the best cards in the format. It lets you and your opponent pick up a benched Pokémon. The loop requires you have an active Machamp SF and a benched Machamp Prime. With your Machamp SF, you use the attack “Take Out” to get easy prizes on Basic Pokémon, or “Hurricane Punch”, get lucky, and Knock something Out with it. After it has done its job, you use your benched Machamp Prime’s Poké-Power “Fighting Tag” to move all the F Energies off of Machamp SF and bring Machamp Prime active.

Then you use Seeker to pick up your Machamp SF and swap it with another Machamp Prime (assuming you have Broken Time-Space in place). You want to make sure though that when you use “Fighting Tag”, you can attack with Machamp Prime. Also this card will let you re-use your Uxie, Azelf, or just heal your Vileplume. You might say that this will help your opponent, but, with Vileplume in play, your opponent will not have the low hand count to re-use their Uxies. Also the advantage you get from playing Seeker is far greater.

Judge
The card that is discouraged from ever seeing play in VileGar. I’ve talked about it in the introduction but I’ll repeat it again. Judge makes both you and your opponent shuffle the hand away and then draw 4. However, with that, your opponent losses their big hand of Trainers and starts off with 4.

In VileGar, your damage output is dependent upon the number of Trainers. However, in LockChamp, your attackers do not rely on the high Trainer count in your opponent’s hand to do significant damage. Why does it matter though? Well there are many ways to counter Vileplume, so by playing Judge before they Knock Out your Vileplume or shut the Poké-Body off with Dialga G LV.X, you can get rid of their huge hand so that it makes their counter virtually worthless.

Broken Time-Space
The only Stadium in the deck and probably one of the most vital cards in the deck. This is another piece of the Machamp Prime loop, but it is not a vital piece for the loop. It is good to have, but you won’t need to put down a second Machamp Prime until your active Machamp Prime is about to die. However, it is used to speed up your deck by allowing you to evolve your Pokémon soon as they come into play.

As much as I’d like to deeply talk about the possible techs for the deck, I choose not to for one main reason: the deck has a really tight list. Consistency will be hindered just by adding a 1-1 tech or changing the Supporters. However, I will mention some cards that can be used as a tech and briefly go over them:

For 1 D Energy, it pretty much counters 90% of the attackers in the meta with the attack “Moonlight Fang”. However, this is a 3 card change to the deck and will make your deck a lot less consistent. Not to mention the low damage output.

Regirock LA
Now this is an interesting tech that is worth being played. Regirock from Legends Awakened has a Poké-Power called “Regi Cycle”. This Poké-Power allows you to discard 2 cards from your hand; if you have a F Energy in your discard pile, attach it from the discard pile to your Regirock. This is a great Poké-Power because of Machamp Prime’s Poké-Power.

Well, that’s it. Part 2 of my new segment. For Part 3, I will be talking about the Machamp/Mesprit build that I currently use, which is working out great so far at least. Don’t just look at the decklist and say this deck sucks, or leave stupid comments that have no logical backings to it. Read the analysis, try the deck out a few times, and then you can criticize. Thanks for reading, folks! See you soon! 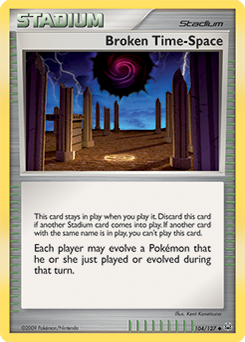