Hi, guys. Some of you may remember my two previous articles about the complex aspects of SP decks, the first one being of its SP Trainers, and the second one being about the techs.

I have been really busy with college and work, but now that I’m finally free from that, I wanted to continue my analysis and go for the next big topic: Energy counts.

As a disclaimer, I have to say that this analysis, even if it’s applied to the generality of SP, is mainly focused on the aggressive builds, such as LuxChomp, BlazeRay, and BlazeChomp (and, to a certain extent, DialgaChomp and Sablelock, but these two have different objectives for their game plan, so keep this in mind).

There are still many hot topics to talk about, like Supporters, main attackers, support Pokémon, and normal Trainers, but I decided to go with this first, because I have seen many SP builds with incorrect Energy counts, either too high or too low, or just plain wrong.

SP decks are special in many ways. One of the aspects that makes them unique is the ability to run on very few Energies but many types at the same time. It’s not unusual to see a LuxChomp with 4 or 5 different Energy types, just running 1 or 2-of each.

So how does it work? What are the correct numbers to avoid clogging your hand with Energies? What Energy do you want in your deck? How many is the minimum necessary to avoid an Energy drought?

Let’s see, a good standard LuxChomp Energy count looks something like this…

This number is supposed to be enough to draw them or look for them with Cyrus, but let’s see a little bit more in-depth the reasons behind these choices, and after that, I will tell you what my personal Energy count really looks like.

pokebeach.comAs you all know, Luxray is our main attacker, and his attacks go with just 1 Electric, thanks to the Energy gains this deck also runs, which are virtually 3 or 4 more Energy in the form of an SP Trainer.

This means the deck runs essentially 15 or 16 Energy!

You are shocked, aren’t you?

Well, since Luxray’s main attack, “Flash Impact”, costs 1 Electric and 1 Colorless, 3 Energy is the recommended number. The reason for this is that since its expected that you will attack with Luxray’s “Flash Impact” a minimum of twice per game (if not 3 times), you would need at least 3 Electric Energy (not including Aaron’s Collection into this equation) to power up his attack, in case he is KO’d sometime along the game. Also, if one happens to be prized, you could be totally safe with 2. The Electric can also power up Garchomp C’s famous attack, “Dragon Rush”, and it’s a basic Energy, searchable with Cyrus Conspiracy.

As a final comment, Luxray has another useful attack in the form of “Trash Bolt”, which costs LCC, and forces you to discard an Energy from your hand. This costly attack is mainly used to OKHO a belted Gyarados, with the help of a Crobat G drop. So after all this analysis, I would conclude that 3 is the safe number.

Some people go with 2 thought, so are they mad? They don’t know how to build a deck? No, and no. There are reasons for this more risky choice, so let’s see them:

One of the reasons for this seems to be a lack of Gyarados in their metagame. If they don’t need to attack with Luxray so often, they can afford to not run a 3rd Electric, and run some other kind of Energy, like a second Warp, a Rescue, a Psychic, a Steel, Dark, etc.
Some even decide to drop the Energy, and add a trainer, Pokémon tech, or a consistency supporter, such as PONT or Collector.

This choice is indeed more risky, because with a decrease in the basic numbers, the Cyrus Conspiracy could end up not being able to find an Energy to grab, delaying your Energy attachment race, which can prove deadly for the LuxChomp player, specially in the mirror match; and if one of the 2 Electrics ends up prized, that would spell trouble for you. Still, it’s a choice that depends on the play style. People who are used to going full aggro with Luxray would probably choose a 2-2 or 3-1 Luxray line together with a 3rd electric, to be safe and to save resources with Aaron’s recoveries.

Others, who tend to attack more with Garchomp (I include myself in this group), who play Blaziken or Dialga in their LuxChomps, or who simply are not worried over the Gyarados match up, would be fine even with 2 Electric. So as you see, both plays are acceptable, depending on the rest of your deck (number of Aaron’s, Luxray-Garchomp lines, rest of Energy line), the meta, and your play style.

pokebeach.comNothing to comment here. No, seriously. A LuxChomp not playing 4 DCE is not even worth looking at. This Energy is so broken that it makes the rest of the multiple-attachment Special Energies seems like a bad joke. Not even Scramble can match it IMO.

4 is the right play, and that’s only because we are not allowed to play more. With Bronzong G’s Energy manipulation Poké-Power, this little sucker is a beast. I seriously don’t know what the Nintendo guys were thinking, reprinting this card in an already hyper fast paced and OKHO exchange metagame.

Garchomp’s “Dragon Rush”, Luxray’s “Trash Bolt”, Uxie LV.X’s “Zen Blade”, Dragonite FB’s “Mach Blow”, Staraptor FB’s “Defog”, Dialga G’s “Remove Lost”… I can keep on going if you want, but lets leave it at that, I think you get the picture already.

Well, this is totally related to your attacker’s build. If you run Dialga G, you may want a Steel in here. If you run Blaziken FB, a Fire will be necessary. If you want to run a Toxicroak (either promo or PL), you will need a Psychic. It’s another Basic that can be searched with Cyrus and helps to keep your Energy count at 4 Basics, which is a healthy number considering that you can grab them with a full Cyrus chain.

Right now, this place is occupied by a Dark in my LuxChomp, but that’s only a metagame counter choice. As long as you put a 4th basic, it entirely depends on what your tech needs to attack.

pokebeach.comAnother important thing to remember is that even if not for your main attackers or techs, there are other Pokémon in your deck, so you should know what their attacks do, and what energies they need. Don’t forget it.

Crobat G has a Poké-Power, but it also has an attack. Many times I have been saved by an Azelf spamming lock up, or a Lucario GL KOing a Tyranitar with “Combo Throw.” So keep in mind that the 4th Basic should be as useful as possible, powering up the attacks of as many Pokémon as it can. Even if you don’t plan on attacking with those guys, there is no telling when a “Psychic Pulse” from Bronzong G could save your game.

Oh, this one is really going to create quite the uproar. Call lovers, Call haters, please hold on your angry posts until reading the entire section.

Personally, I’m with the lovers of Call Energy. But it’s certainly not a must have in a LuxChomp.

Still, it does have a lot of uses, not merely the turn 1 search. Many people seem to forget that this is another Energy that can be used to attack.

In any case, there is no denying that this is a great card, whether you like it or not. It helps prevent donks, adds to consistency, lets you grab Pokémon under trainer lock or in turn 1, and is not considered an attack, so it bypasses effects such as paralysis, sleep, effects of attacks, powers, etc.

I think 3 is the right play, but 4 is not wrong at all either, and I would play 4 if not for the fact that I can’t seem to make them fit in my list. I think it depends STRONGLY on the number of Pokémon Collector that you play already, so both plays are acceptable.

Collector gets one more Pokémon and lets you use its coming into game powers, which is indeed superior to Call. However, the ability to prevent donks and grab Pokémon in turn one to level up next turn is really neat too, so both have its place in a well balanced list.

The extra spot created by not playing 4 Call can be filled with any Special Energy that has a real use in the deck. So far I have tested with Warp Energy and Rescue Energy with mediocre results, and with SP Energy with really bad results.

The first one is good to get heavy retreating Pokémon like Bronzong out of the active (especially under trainer lock, ouch) or to snipe with Garchomp twice in a row, and the second one is good because it saves resources to get back with Aaron’s, and if you get it on Uxie LV.X, you don’t have to worry about your consistency being damaged by its KO. Both are up to the task, so I leave that decision to you. If no special Energy really fits your style, go back to good old 4 Call.

pokebeach.comWell, now you know the reasoning behind every single Energy that’s inside of a sleeve in a LuxChomp deck. As I said before, this theory also applies to BlazeChomp, switching the Electrics for Fire, and in a certain way, to DialgaChomp and Sablelock.

Sure, there are some changes here; Dialga needs more Energy and can also make good use of Special Metals and Warp Energy, increasing the special Energy count to the roof, and Sablelock doesn’t normally run SP attackers outside of Garchomp C (except for Chenlock), but in any case, they have been built following to the same reasoning.

On a side note, I would like to comment that the number of Energies that you can run in SP decks also has a few more factors involved aside from techs, main attacker lines, and play style.

These two factors are Aaron’s Collection and Conductive Quarry. I won’t go into too much detail, since I will talk about them in future articles, but let’s get the basics down at least.

The number of Aaron’s (and the presence or absence of a VS Seeker) can deeply affect the outcome of the Energy attachment race. Normally you have to be very careful when and where you attach, even if you have Bronzong G to fix the Energies later. However, the presence of a second Aaron’s will give you a little bit more room to play with your Energies. But don’t get overconfident, you will surely need it for the recovery of your SPs too.

Conductive Quarry works in a similar way as Aaron’s, giving you the chance to recycle your Steel (either Basic or Special) and Electric Energies.

This may let you run one or two less Energy, since you can get them back later, but I remind you, don’t get careless with your Energies.

So as promised, this is the Energy count of my LuxChomp:

Well, this was the third part on the analysis on how to build and play SP decks.
I appreciate any constructive comments or anything I may have forgotten to mention. 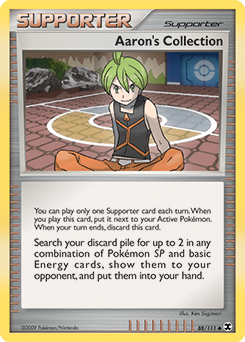