Simple, Eevee is different. Most Pokémon that evolve have one predetermined Pokémon they evolve into and that’s that. Some can alter between two (like Politoed and Poliwrath). However, Eevee can evolve into seven different Pokémon (Flareon, Jolteon, Vaporeon, Umbreon, Espeon, Leafeon and Glaceon).

pokebeach.comToday, I’ll be looking at Glaceon LV.X, which was released in Majestic Dawn. To start off, Glaceon LV.X is a Level Up of Glaceon, which is an Eeveelution. Being an Eeveelution does come with its benefits which include a number of playable Eevees, but also the support of Espeon and Umbreon MD if you choose to run them.

For a Stage 1 Level Up, 100 HP is quite low. Since it’s a Water type, you can hit Donphan and Charizard for Weakness. Now, Glaceon LV.X also comes with the uncommon +30 Metal Weakness. To round it off, it has a very manageable Retreat Cost of C.

“Chilly Breath” is where this card shines. “As long as Glaceon is your active Pokémon, your opponent’s Pokémon can’t use any Poké-Powers.” Wow, that is good!

In Regigigas decks, they’re forced to run 3 Mesprit, four Super Scoop Ups, as well as a combination of Seekers and VS Seeker to keep their opponent’s Poké-Powers locked throughout the game. All Glaceon has to do is be active and bam, Poké-Powers are locked.

We’re certainly off to a great start with Chilly Breath, can “Avalanche” keep the stride going? Well, not really. For the high cost of WWC (while it can’t benefit from DCE, at least it has one C in its Energy Cost, meaning it can use Cyclone, Warp or Call Energy to power it up), the attack does a low 70 damage. In addition, you flip a coin. If it’s head, 20 damage to each of your opponent’s benched Pokémon.

Unfortunately, between having a low damage output, a high cost and a flip effect, Avalanche isn’t a very solid attack. But, then I began to think, just because a card isn’t a strong attacker, doesn’t mean it isn’t good (Claydol’s attack was terrible).

pokebeach.comI had started to consider pairing up Glaceon with some sort of Hit-and-Run attacker such as Magnezone or Gliscor LV.X. You attack with Magnezone/Gliscor/Whoever, then switch Glaceon active, locking all of their Poké-Powers.

Sadly, with a low 100 HP and +30 Metal Weakness, it is very likely it will be KO’d and since it is a Stage 1 Level Up, it is almost impossible to have another one ready turn after turn. In addition, Dialga G LV.X shuts off “Chilly Breath”. Any deck that tried to win with this strategy would have next to an auto-loss against DialgaChomp.

My Recommendation: It has an amazing Poké-Body, but the rest of the card just doesn’t keep up. I personally don’t think it’s good enough to be played. If you’re a really big Eeveelutions fanboy/girl insisting on playing Eevees every week at League and you don’t have Umbreon Prime, this is your best bet.

Note: “~” is a mathematical term that means roughly or about. 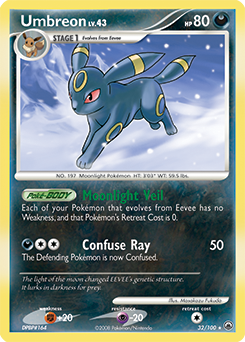