pokegym.netWelcome to today’s review where I’ll start reviewing Call of Legends cards! To kick off this event, I’ll be reviewing Lucario CL. For starters, Lucario is a Stage 1 Fighting Pokémon, meaning it should have a slight speed advantage over Stage 2 decks. Its ability to hit Luxray GL and Magnezone for Weakness means we’re off to a great start.

The Psychic Weakness is pretty bad, meaning both Gengar and Uxie LV.X (a card that 80% of all decks play) can 1HKO it. The C Retreat Cost is acceptable (I act as if P!P would actually change the card effect if I didn’t like it).

Lucario has two attacks in the form of “Dimension Sphere” and “Sky Uppercut”. The first costs two C Energy and provides a base damage of 30. In addition, for each Pokémon in your Lost Zone, “Dimension Sphere” does an additional 20 damage. WOW! This attack definitely offers the potential to be hitting for hysterical amounts of damage.

Because of this potential, Lucario has received massive hype, most of which is deserved. However, in order for this deck to be effective, you will need a way to quickly, consistently and effectively get multiple Pokémon into your Lost Zone. That’s where Palkia G LV.X comes in. The object of the deck is to maintain a strong Power Lock, use “Lost Cyclone” to quickly send Pokémon to your Lost Zone and Lucario hitting for 90+ each turn.

“Sky Uppercut” has no place being anywhere near this card. For FFC you get a pitiful 70 damage that bypasses Resistance. I’m waiting for the PCL to stop printing these types of attacks. They usually cost three Energy, do a low amount of damage and ignores Resistance. That isn’t good!

pokebeach.comI can very confidently say that the popularity of this deck will depend heavily on the popularity of LostGar. Not only will your opponent be trying to get Pokémon into your Lost Zone, but so will you! It’s just too easy for them to plop down a Lost World and beat you.

In addition to a deck fully based on Lucario, I have tried running it as a thin tech line to fight off LostGar decks. While I haven’t done enough testing to show if this is actually a viable strategy or not, it has shown promise.

My Recommendation: If LostGar or similar decks end up being severely over-hyped, I think this could become a pretty good deck choice. 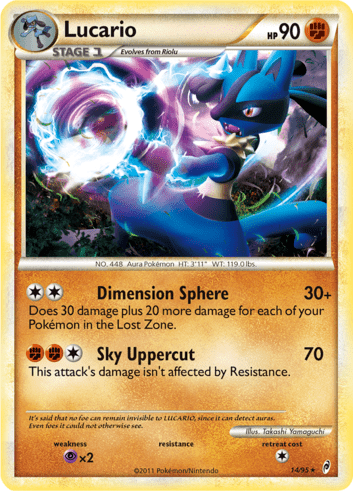