For today’s review, I decided to take a look at Empoleon from Majestic Dawn. This card was very popular back in 2008 along with Gardevior/Gallade and its partner, Bronzong MD. For starters, Empoleon has 130 HP and a +30 Lightning Weakness.

If playing Gyarados and Machamp becomes so uncommon that LuxChomp players drop Lucario GL from their lists, Empoleon will be a lot harder to be KO’d by Luxray GL LV.X. Also, with the expected rise of DialgaChomp to counter LostGar will inevitably cause (at the very least) a small reduction in LuxChomp players.

Water typing will help against a few more uncommon decks (e.g., Charizard and Donphan). Finally, the Retreat Cost of 2 is kinda high, but in a spread deck it isn’t as large of an issue (because you usually leave the spread attacker active until they die, so they do as much damage as possible).

While Empoleon lacks a Poké-Power or Poké-Body, it has two good attacks. Its first attack, “Dual Splash”, costs a mediocre WC (not amazing, not terrible) and does 30 damage to two of your opponent’s benched Pokémon. It’s actually a very decent spread attack hitting for a decent amount of damage and can use Call/Warp/Cyclone Energies.

“Surf Together”, since it costs WWC, will take three turns to power up without help from the outside world (aka Feraligatr Prime). While the base damage is 50, it does an additional 10 damage for each Pokémon on your bench. However, you must flip a coin as well. If the result is heads, “Surf Together” does 10 damage to each of your benched Pokémon.

While that last bit is unfortunate, you have the potential to hit for 100 damage, which is quite powerful. If you were to add in on an Expert Belt, you have a 150 HP Pokémon hitting for 120 damage. When I see this card, it reminds me of a fork in the road. You can choose to focus a deck on “Dual Splash” in a spread deck (EmpoZong 2.0?) or a heavy-hitting, tank like deck.

Since Seeker, Super Scoop Up and Garchomp C LV.X are so popular in the format, a spread deck could be tricky.

My Recommendation: I think this card has a bit of untapped potential in this format, but I doubt it will ever be as prominent as it was in ’08 because of all this healing in the format. 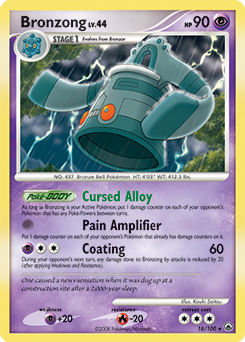