Firstly, let me apologize for the span in-between this and my last post. January is always a hectic month for me what with work, the Holidays and such, so I haven’t had enough time to write (or spend on Pokémon in general), as I would like. With States coming up me and my team will be testing more, so I should have lots of interesting stuff to write about in the weeks to come.

Because I haven’t exactly had the utmost time/concentration/inspiration to spend on Pokémon lately, I thought I would make this article sort of a mishmash of subjects, and try to spark some discussion in the comments section. I understand this type of article won’t be for everybody, but hopefully you can bear with me until I get some relevant testing results to share with you all.

TCG News of the Day

– So that Call of Legends set was pretty bad, eh? I don’t really think so. I mean, I completely DO think that everyone reading this post thinks that the set is bad, and rightfully so. However, that is probably because we are all jaded competitive players who have little need for most of the cards in this set.

If you take the time to look at this set from a purely “How many good cards are in it?” standpoint, it starts to become less terrible, considering that the set consists of…

So, 11 cards that range anywhere from constructed kinda playable (Leafeon, Mr. Mime) to semi-staples (Smeargle, PONT) to new cards that could make quite a splash (Lost World, Lost Remover).

Obviously 11 cards, most of which are either unproven or are reprints does not a great set make, but I thought I would throw an opposing viewpoint out there, since the quality of COL has been a relevant discussion as of late.

– I assume that by now you’ve all heard of the new Online TCG that will be implemented in the next few months? If not, check down a few posts on this very website! I’ll give you some time to check that out……Now that that’s out of the way, what do you think? Personally, I think this has the chance to be quite game changing, but unfortunately I don’t see that happening. Here are a few reasons why:

Don’t get me wrong, if OP wants to roll something out in the same vein as Magic The Gathering Online – that is, the ability to buy, sell, and build real decks, real-time set releases and events with prizes and relevance to the game — then that would be amazing, and I would fully support that.

In fact, if something like that were to happen for Pokémon, I would probably get even less article writing done. So maybe its not such a great idea. =\

Let me pose this question to you: If something like MTGO were opened up, and let’s say you could create an account for $10, and with that account you would receive a pack of the newest set, as well as infinite basic energy, a few theme decks, and a few hundred staple cards, would you join?

With the idea being, of course, that you would purchase packs at full-retail price (there would also be a marketplace where you could buy/sell/trade cards), and then in turn could participate in events for prizes, trips, packs, etc. Would you be down? Why or why not?

– I also assume that you’ve all heard of the new rule regarding Game 2 of top cut matches? For those who aren’t aware, earlier in the year the rule was changed to say that the winner of Game 2 was the player who had taken the most prizes (regardless of the number taken).

There was a bit of an outcry over that (for reasons that I can’t go into at the moment, but would be more than willing to write an article on, if anyone would be interested), and it was recently announced that it was being changed back to say that, in order for Game 2 to count, the player in the lead on the prize count had to have taken 50% or more of his/her prizes.

There’s quite a big discussion going on about it over at the Pokégym that I suggest you check out. I mainly bring this up because it just goes to show you how much the people in charge actually care. Sure, they make poor decisions sometimes and they’re often hard to read, but most of the time when it really matters and when it’s something that the community is truly passionate about (the 30+3 rule comes to mind), they make it right.

Even in the times when they don’t, they typically have sound reasoning for why they can’t make it so, and are typically very transparent in their practices.

– Speaking of OP and controversial decisions, how does everyone feel about States trophies being transformed into medals? For those who aren’t aware, while perusing the SPT forum on the ‘Gym I noticed that a few TOs had listed medals as the prizes, instead of trophies.

My friend Amelia made a thread about it on the Gym, wherein it was confirmed that we were getting medals as replacements for trophies, and members of OP made solid justifications for it, in my mind. You should go check out the thread if you’d like to read more about it.

Overall, I can understand the decision, but I have to say it is a little depressing. Because I am a master trainer, I was excited about winning some kind of trophy this year, and it looks like that won’t be happening, at least not at a States or Regionals level. I suppose there are worse things in the world, especially considering that we don’t pay for tournaments and such, but it’s still a disappointment.

– Who wants to convince the SixPrizes crew to do another podcast? Because I sure do. If you’d like us to record another edition of 6P radio, please e-mail (read: spam) adam@sixprizes.com, voicing your concerns. Also, if you have any suggestions for articles, videos, podcasts, or anything of that sort, please shoot me an e-mail at kenny@sixprizes.com, as it’s obvious I’m quite desperate for ideas.

– Has anyone been testing winning Gengar lists lately? If you have, please hit me up! Haha. We’ve tooled around with a crapton of different lists, and for some reason we can’t get any of them to have decent matchups against SP.

I’ll go deeper into why in a later article, but for now, all I can say is that I’m quite disappointed with how this deck has turned out, but I’m keeping my mind open, and I honestly believe that someone will break this deck before too long. I’ve only been playing Pokémon seriously for the past year or so, but has anything been so hyped like this, and fallen so flat?

I mean, I know there are hyped cards all the time, but it seems like almost all players of all skill levels were hyping this deck, and now all of those same players just aren’t finding a home for it. Maybe (read: hopefully) I’m wrong and someone is cracking this in half in secret, but for now I’m really unsure.

One last thing, here’s my most recent LuxChomp list that we’ve been tooling around with. I’m not sure that it’s completely optimized and there are still some slots I’m tooling around with, but it’s had solid matchups across the board thus far. Let me know what you think!

The 2-2 lines of SP LV.Xs are mainly to combat the Gengar threat. As I said before, I’m not sure if Gengar is an amazing deck yet, but either way I know it has the power to “Gastly, Rare Candy, Gengar, Attach P, Hurl Into Darkness targeting your 1-of Garchomp C LV.X”, and that’s enough of a reason, at least in my meta, to go with the 2-2 lines.

– Weavile G is also to counter the Gengar threat. I played around with Absol, Honchkrow SV, and no counter at all, and found that for this deck, Weavile was strictly the best.

It’s a basic (easy to tutor for), is an SP (can be Poké Turned/Energy Gained/Healing Breathed/Provide prerequisites for Power Spray/Can be Aarons’d), has a relevant first attack, and can 1HKO Gengar with relative ease.

All of these factors combined make Weavile undoubtedly the best play, in my mind.

– I really want to fit in Promocroak, but I’m not sure what to cut for it. Any edge in the mirror is relevant and needs to be at least considered, though.

– I’m not too sure about my Spray/Radar/Junk Arm/Ball numbers, I’m still working on all of those, although I do live 2 Premier Ball and 1 Junk Arm, and am not entirely sure I need more than 2 Spray. We’ll see though, as I said, some of these slots are definitely being worked on.

– The D Energy is for Weavile, of course. Still trying to find room for a P and a Promocroak, as I said. 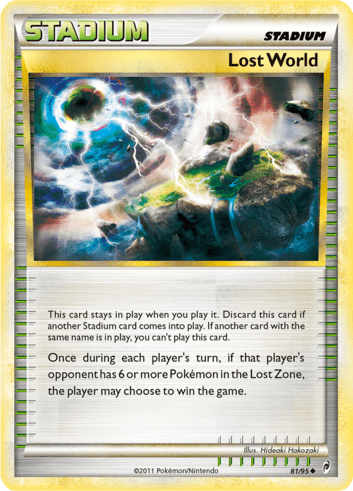