pokebeach.comSearch cards are great for finding that one card you really need. But eventually, your hand starts to dwindle and you find yourself playing with a only one or two cards. That’s where draw and refresh cards come into their own. Both of these categories of Trainers and Supporters help to rebuild a depleted hand.

When played, they usually allow you to increase the number of cards in your hand, by drawing from your deck. The difference between pure draw cards and refresh cards is the action taken before drawing. With a draw card, you simply play the card, perform any necessary prerequisites and draw “x” number of cards.

A good example of this type of card is “Volkner’s Philosophy”. It gives you the choice of discarding one card, then allows you to draw until you have 6 cards in your hand. With a refresh card, you play the card, shuffle your hand into your deck, and then draw “x” amount of cards.

Professor Oak’s New Theory (PONT) is the best example of this type of card, letting a player shuffle their hand in and draw 6 new cards.

Using a refresh card, you may or may not end up with more cards than before, but you do change, or “refresh” your hand. Refresh cards can have uses other than just getting more cards. Let’s say you have 11 cards in your hand (including a PONT), but only have 1 card left in your deck.

The turn after you draw that card, you will lose by decking out (unless you win by some other condition). But if you play your PONT, you can now shuffle in the 10 cards and draw 6. By returning those cards to your deck, you are now left with a deck of 5 cards, giving you five more turns instead of one.

Other than just getting rid of a bad hand, another reason to use a refresh card is to avoid being decimated by a “Poltergeist” attack from Gengar SF or Mismagius UD.

pokebeach.comYou may have a hand full of unusable Trainers, Supporters and Stadiums. By playing a refresh card, you at least have a chance of reducing the number of T/S/S in your hand. It’s a calculated risk, but sometimes one that is well worth taking.

There is a down side with refresh cards. Occasionally, you need one of the cards you have in your hand, but can’t yet play (e.g. a Luxray GL LV.X, when you can’t get the Luxray GL active that turn to level up). It can be a painful choice deciding to shuffle in that important card. As a result, some decks run a mix of both draw and refresh cards.

There are, however, a number of Pokémon that have Poké-Powers which provide draw power. In the previous format, Claydol GE all but eliminated the use of draw Trainers and Supporters, due to its own massive draw ability.

Our current format has seen Uxie LA become a staple card in almost every deck due to its searchability, and the effect of its “Set Up” Poké-Power. When played from the hand, “Set Up” allows the player to draw until they have 7 cards in their hand.

Uxie fits easily into any deck because it’s a Basic Pokémon and has a Colourless Energy attack which can send Uxie back to the bottom of your deck.

In addition, Uxie LV.X has a mini search engine with its re-usable Poké-Power “Trade Off”. This lets you look at the top 2 cards of your deck, choose 1 for your hand and put the other at the bottom of your deck.

A Spreadsheet of Draw, Refresh and Disrupt Trainers and Supporters in the Current Format

Other Pokémon that have Poké-Powers with draw capabilities, but are more in their limited uses, include: Dodrio SV, Magnezone Prime, Ninetales HS, CL, and Dusknoir SF.

Although Colourless, and therefore able to fit into any deck, Dodrio is generally considered to be too underpowered to make its use worthwhile. If you are planning a Lightning, Fire or Psychic deck however, Magnezone, Ninetales and Dusknoir are worth looking into.

Still other Pokémon have attacks which allow the player to draw cards. Few of these see much use for this specific purpose. A card like Blissey PL, whose first attack “Return” allows the player to draw until they have 6 cards in their hand, is generally included in a deck for its healing Poké-Power, rather than its attacks.

As a result of these “draw” Pokémon (mainly Uxie), pure draw Trainers and Supporters have been seeing very limited play. In high Energy count decks, Engineer’s Adjustments can be used as a semi-powerful draw engine (allowing the player to draw 4 cards when they discard an Energy from their hand).

Of the other draw cards, Volkner’s Philosophy has a similar ability to Uxie, but cannot be searched out as easily. It is possible that once Uxie is rotated out of the format, draw cards will begin to see a revival in play.

There are also a few Pokémon that see use because of attacks or Poké-Powers that have a refresh capability. The most well known is Chatot MD. Colourless, free retreat, an Energyless attack “Mimic” (which allows the player to shuffle their hand in and draw the same number of cards as their opponent): all of these attributes have secured Chatot MD a place in many top decks.

Another Pokémon, with not only refresh abilities but disruption as well, is Giratina PL9. Its “Let Loose” Poké-Power forces both players to shuffle their hands in and draw 4 cards. This card has seen use in decks like Yanmega Prime, which benefit from both players having the same number of cards in their hands.

That leads nicely into the last category included in this analysis – disruption cards. This group of cards is all over the map in terms of what they can do. The one single thread running through all of them, however, is their ability to force the opponent into an action, or prevent them from performing an action. Some of these cards have a dual function. Looker’s Investigation, Judge and Team Rocket’s Trickery are good examples of dual function cards.

pokebeach.comOther cards, such as Poké Blower +, Pokémon Circulator, Pokémon Reversal and Cyclone Energy force the player to switch their active Pokémon with a benched Pokémon. There are a variety of other effects that cause disruption such as Energy removal, devolution, and discarding.

The only one I will mention specifically is the SP exclusive card TGI G-103 Power Spray. It is the only card in the format that can be played on your opponent’s turn, and can prevent them from doing something. Power Spray allows its owner to cancel the effect of a Poké-Power that an opponent has declared they are using.

As with other T/S/S card effects, there also exist a large number Pokémon that have similar abilities using attacks or Poké-Powers. The main advantage of T/S/S cards is that they are more easily fit into a wider variety of decks.

Often however, T/S/S cards and Pokémon that have similar effects are combined into one deck, in order to improve the consistency of the deck’s main focus. An example of this combination is found in my article on the deck “Dark Disruption” (posted here on 6P).

That sums up a brief look at T/S/S draw, refresh and disrupt cards. I know the article has talked a lot about Pokémon, rather than T/S/S cards. That is primarily because Trainer and Supporter draw cards have been largely ignored in the competative environment in favor of similarly functioning Pokémon. I felt, therefore, that it was necessary to discuss this phenomenon.

Next up: Recovering, Moving and Healing 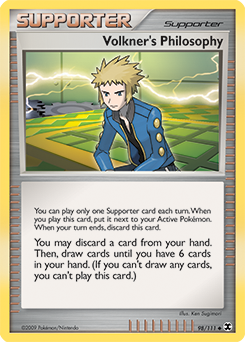