Yo 6P Community! I hope everyone had a great time at State Championships. It was fun to see a lot of our Poké-buds and play against a wide variety of decks- T-tar, Luxchomp, Vilegar, MagneRock, Machamp, MewPerior, just to name a few.

We attended the Pennsylvania and Delaware State Championships and had a great time. Kudos to all the event organizers for doing a great job. Like last year, the PA event was held at 6 Feet Under Games in Lancaster County which is PERFECT as we live only 20 minutes away (which, as a reminder, is the reason why the World Championships need to be here in 2012 – start lobbying Pokémon NOW!).

My son Nicholas and his friend Alec played in the Seniors Division with Nicholas playing LuxChomp and Alec going with Machamp 1 week and GengarLock the next. None of us had stellar performances, but we managed to chalk up some good wins.

I, of course, played Magnezone the 1st week and started well (2-0) before choking and finishing like 3-5. For week 2, inspired by Fusion Doritos, I tried make a last-minute deck overhaul to fuse Magnezone and GengarLock (a mediocre idea, by the way – stick with the Fusion Doritos). My 1st week list was very similar to the one published here on SixPrizes. So, I finished about even over the 2 weeks which is about normal for me.

A couple of other highlights were getting to see Adam at both tournaments and loaning him a Sablelock deck to play in Delaware (it was missing a few key supporters – sorry about that Adam – it’s the best I could do!). Another highlight was a guy in Seniors in Delaware who made top cut using a JumpLock deck inspired by – of all people – me!

He had read my article here on SixPrizes (one of the serious ones – they do exist) and tweaked it to fit his style. Not sure how he finished, but it was good to actually inspire someone to play better, especially since my play left much to be desired.

Another interesting development was reading tournament reports from other areas and seeing the several decks do well. Of particular interest to me were VilePlume + Dusknoir and Magnezone + Regirock (aka “MagneRock”). Several people I know and read about played Magnezone variants by combining with Vileplume, Scizor Prime, and even Entei-Raiku Legend.

However, the most promising of the Magnezone decks is MagneRock which did extremely well in the European Challenge and placed well in several States. I actually got to play against it at the PA Championships, and even though I did well aginst it in playtesting, my opponent had wisely chosen to add some Rescue Energy which gave him the ability to reset even faster than I could.

I also noticed that no one here on SixPrizes has gone into an in-depth article about MagneRock, so as a self-professed Magnezone addict, I thought I’d take a pass at it. So, here goes!

The primary strategy behind MagneRock is to use the synergy between Magnezone Prime and Regirock to fuel Magnezone’s “Lost Burn” attack while simultaneously discarding fighting energy and unneeded cards from your hand using Regirock’s “Regi Cycle” Poké Power.

This not only allows you to get fighting energy into play but simultaneously creates hand space to use Magnezone Prime’s “Magnetic Draw” Poké-Power to replenish your hand.

The ability of this deck to plow through a deck is remniscent of Claydol GE’s “Cosmic Power” last season (for all you Claydol lovers out there, check out my Love Poem ). In fact, I would say that, hands-down, the “Regi Cycle”/“Magnetic Draw” combo is the best draw engine in the current format.

The other “attraction” of this deck is that it runs fantastic with Judge which helps not only to replenish your hand but severely disrupts your opponent’s hand. Running 3-4 Judge is critical in any MagneRock deck.

You will need a minimum 4-2-2 Magnezone Prime line. I personally recommend rounding out the other 2 Magnezone slots for a Switch Magnezone and a Magnezone Level X and probably adding the 3rd Magneton.

In fact, one of the deck’s nemeses is Toxicroak G Promo which can use its “Poison Revenge” attack with 1 Crobat G drop to totally Knock Out a Magnezone Prime.

Regirock is critical for the deck’s energy acceleration and to complement Magnezone Prime’s draw power. 2 seems to be the best number for the deck. A single Uxie is also helpful to get early draw power when needed, and Azelf is necessary to grab needed Pokémon out of your prizes.

Most are self-explanatory, but a further note is needed for the 4 Judges. These are absolutely critical in the overall strategy of Magnerock which is to Knock Out your opponent’s early (likely high HP) attacker and then limiting their ability to reset with a smaller “Judged” hand.

pokebeach.comThe energy line for the deck needs to be around 18-20 due to the “Lost Burn” energy card effect. In addition, the deck needs a modest (4-6) lightning energy count to properly use Magnezone’s attack and also needs 7-10 Fighting energy for Regirock’s “Regi Cycle” power.

I also feel strongly that a minimum of 2 Rescue Energy are needed to help keep your Magnezones in play. In addition, at least 2 Warp Energies are needed in case Regirock is your unfortunate starter or dragged to the Active Spot by your opponent.

Here are some recommendations for open slots:

I would recommend adding a line of basic starter Pokémon to any Magnezone list to reduce the risk of starting with a Regirock or getting donked with a magnemite start. The top contenders are Spiritomb or Sableye, but another possibility is Smeargle.

My recommendation is Sableye due to its versatility and the fact that Spiritomb trainer locks yourself, and Magnezone Prime is really speed-based. A 4th possibility would be to use Unown R to help prevent the donk but also ensure a faster Magnezone Prime start.

Another possibility with extra slots is beefing up your current non-Pokémon card counts or adding key trainers or supporters. A 4th Bebe’s, a 3rd BTS, Twins, Seeker, Expert Belt, Pokémon Communication, a 3rd Warp or Rescue Energy could all come in handy.

There are some interesting techs you could add to the deck if you would like.

Machamp SF. There is certainly room in the deck to add a 1-1 or 1-1-1 Machamp line to help with the SP matchups and also to help in sudden-death situations. The deck already runs fighting energy, so this is a very viable option.

Ditto LA. I personally love the idea of running Ditto in this deck as it can help tremendously in the mirror match. In addition, running a couple of Rainbow Energy in the deck can help as a Gengar counter.

Crobat G. A single Crobat G can help in many matchups, especially with the “magic” 110 HP on Gengar SF, Luxray GL LV.X and Garchop C LV.X. Running this with a few Seekers or Poké Turns can help avoid a “Feinting Spell” or only require a 2 energy “Lost Burn” cost for Magnezone Prime.

Blissey Prime. Blissey Prime with a couple of Seekers is a really nice addition to the deck as you can remove all energy using your active Magnezone Prime’s “Lost Burn” attack, then heal with Blissey Prime the following turn after taking damage. Or, you can even discard energy with Blissey’s Power and then reattach them with “Super Connectivity” Magnezone or “Regi Move”.

Shaymin UL. A single copy of this card could really come in handy in order to ensure a constant stream of “Lost Burn” attacks. Your benched Regirocks will almost always have energy on them, so if your Magnezone Prime was Knocked Out the previous turn and you have a benched Prime ready to attack but doesn’t have energy, you can attach 1 for your turn and then move a fighting energy up with Shaymin’s Poké-power.

The strategy is pretty straightforward.

Early Game. The ideal start would be Sableye and perhaps another basic on the bench. For your first, turn, you would likely use a Collector to grab Magnemites and Regirocks to help with setting up. The goal is by turn 2 or 3 to have Magnezone Prime active and attacking with 2 energies attached and to also have both Regirocks on the bench.

Mid-game. Continue to Knock Out your opponent’s Pokémon with Lost Burn while setting up a 2nd Magnezone Prime on the bench and a Switch Magnezone. Also, continue to attach fighting energies to Regirock each turn and disrupting your opponent’s hand with Judge.

Late Game. Continue to take prizes, being careful not to lose too many Magnezone Primes early in the game as they are needed in the end.

DECKOUT WARNING: Be very careful about decking out as using both Regirock’s discarding powers can leave you with very few cards by the end of the game. I’ve decked out several times in play testing without realizing it, so just be very aware of your deck size

LuxChomp. Slightly Favorable/Favorable. The biggest risk to Magnezone Prime is early game disruptions with Garchomp X snipes on Magemites/Magnetons and Luxchomp “Bright Looks” on benched Regirocks. Key techs: A 3rd warp energy or Machamp and possibly a Crobat G or Expert Belt to get the key 110 damage needed with only a 2 Lost Burn energy cost.

DialgaChomp. Favorable. Dialga is built to be a tank, taking hits and then healing. Fortunately, Magnezone Prime can just blast Dialga to death. Plus, a deafen trainer lock has little impact on Magnezone, and Magnezone relies on few, if any, Poké-bodies.

The techs noted above for LuxChomp also apply to this matchup. And, of course, many DialgaChomp players also play Promocroak, so just be aware of this possibility.

Vilegar. Even/Slightly Unfavorable. The trainer lock does hurt MagneRock’s setup, and “Fainting Spell” is a constant annoyance. In addition, a “Shadow Room” snipe on a benched Regirock can hurt Magnerock’s draw power and energy acceleration.

However, using Judge for hand disruption and discarding trainers and supporters with Regirock’s power limits Gengar’s damage output considerably. A Ditto tech with rainbow energy or a Crobat G could greatly assist in this matchup.

Gyarados. Favorable. Gyarados’ lightning weakness is just too much, and Gyarados needs 2 attacks to take out a Magnezone Prime.

Sablelock Even/Slightly Favorable. Assuming you run Sableye as well, you should be able to break the hand lock fairly quickly. But, the matchup can quickly turn unfavorable if your opponent manages to control your hand size early game.

Mirror match. Be very careful about when you start your attacks as whoever starts will likely sacrifice their Magnezone the next turn. Be sure to have a rescue energy attached for recoverability. Also, consider running Ditto LA as this is extremely helpful in the mirror.

Cards and Strategies to Consider Against Magnerock

pokebeach.comYou may not want to play Magnerock and would rather just tech against it. Ways to beat/counter Magnelock include Mesprit power locking, Umbreon Prime’s “Moonlight Fang” attack to prevent the effects of Magnezone’s attacks, and playing a strong fighting type like Donphan Prime.

Hand lock strategies like Sablelock can be difficult against Magnerock due to the heavy supporter lines, possible Sableye starters, and Magnezone Prime’s card draw powers.

Another threat is a late-game Entei-Raiku Legend, assuming you can get at least 1 more damage counter on each Regirock and your opponent has a damaged Magnezone Prime with at least 6 damage counters on it (could be a good strategy in LuxChomp).

As noted earlier, PromoCroak is probably the most versatile Magnezone counter, assuming Magnezone hasn’t level up to its metal type.

MagneRock has clearly risen to a top tier deck contender during State Championships and should be strongly considered for Regional Championships. Below is a possible full decklist for Magnezone: 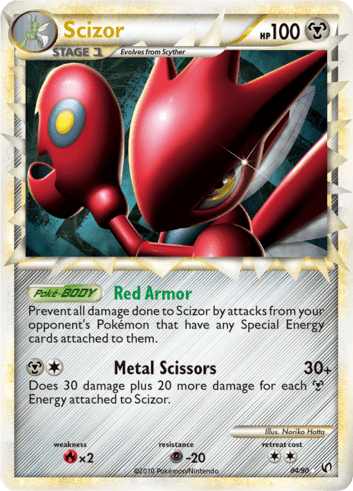