pokebeach.comHey everyone. I’m kn3ll_ (pronounced nEL, as opposed to kneel). This is my first Card of the Day, and I hope to give you lots more. I’m a bedroom DJ, I enjoy hardcore techno (both UK and Dutch), and I love Pokémon. I’m not in a competitive league, but I try to be the best player I can, and would love to find a league where I can test myself.

But enough about me, let’s get to talking about a card that not a lot of people realize the full potential of: Ampharos Prime.

Ampharos Prime is a Stage 2, 140 HP, Lightning type, with a x2 weakness to Fighting, and a -20 resistance to Metal. You aren’t going to wall too much with Ampharos, but the 140 HP is pretty bulky. It gets thrown in the dumpster by Fighting types like Donphan, who not only hits Ampharos for x2 but also resists Ampharos’ attacks.

Machamp can hit Ampharos hard, but isn’t as much to worry about as Donphan. A two Retreat Cost makes for more than I’m willing to pay, so it’s probably not going to be the active.

As far as its pre-evolutions go, Mareep PL and Flaaffy PL are probably the way to go, although neither is stellar.

For one electric and two colorless, Ampharos prime can use “Lightning Crush”. 40 Damage is low, but a coin flip causes another 40 or to discard an energy, which synergizes well with its real selling point: its Poké-Body.

“Conductivity”, Ampharos Prime’s Poké-Body, states that whenever you opponent attaches an energy to a Pokémon, to place a damage counter on that Pokémon. This leads to an interesting combo with Ampharos’ attack. When you flip tails, you only inflict 40 damage, but force your opponent to expend resources and damage their Pokémon to recover.

pokebeach.comConductivity also works well with Ampharos PL’s Poké-Body, “Damage Bind”, to disable the Poké-Powers of damaged Pokémon. In my opinion, it’s an ineffective means of locking, as not all Pokémon that use Poké-Powers will use energy, and it’s completely useless against on-entry Poké-Powers that are quite common.

Ampharos can obviously used to counter “Rain Dance” decks, but another potential use of this card arises after the release of the next set: Emboar BW, perhaps the most hyped Pokémon of Black and White, must walk on tiptoes around Ampharos’ Poké-Body.

Decks such as MagBoar or Samugatr, which rely on the placing of dozens of energies on its Pokémon, are rendered useless by Ampharos- assuming you can get it set up in time. However, until Dialga G LV.X leaves the format, Ampharos probably won’t see much play.

I’ll give Ampharos Prime a gracious 3/5, for being an unseen counter to a very hyped card. It’s a stage 2, which hurts it greatly, and its bottom stats are pretty horrible. It may have a place in a world free of Dialga G LV.X, but until then, there’s really no room for it in most decks. 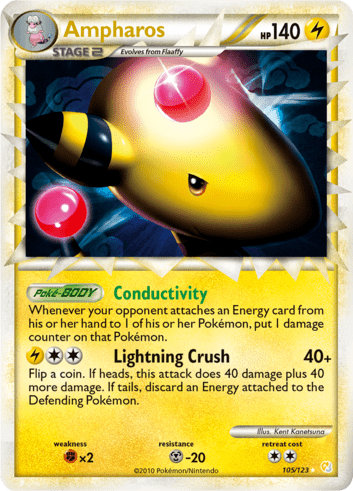