So, why do we look at Froslass GL? First reason, it’s an SP, meaning it has the ability to abuse the Cyrus engine and benefit from all of the SP tools. With this in mind, we must remember that every Pokémon SP is worth a look before throwing them into your tins never to be seen again, until someone else posts a good use for them.

Now, let’s look at the bottom stats, with metal weakness, no resistance, and Retreat Cost of one. Not great, not terrible, pretty standard, meh. Its HP doesn’t make this card seems any better, being at the less-than-average 70.

Where this card requires a double-take is its first attack, “Sleep Inducer.” Sleep Inducer is basically Blaziken FB’s Luring Flame but, arguably, better. For any Energy or Energy Gain, you get to drag up one of your opponent’s Pokémon and put it to sleep.

Why is this better than Luring Flame? Well, it’s not standard “better,” otherwise it would be played more often than Blaziken FB, but there are ways that it could be better. The reason this isn’t played more is because of reliability, as the special condition burn will stick and sleep is determined by a coin flip.

With all of the Warp Energy and Warp Points floating around in decklists, this may not seem like a big deal, but it is. If a Pokémon is burned, they can retreat. If a Pokémon is asleep, they cannot retreat. This just means that there are less options that your opponent has to get out of a bad situation.

pokebeach.comThis can cause the same, if not more, damage to your opponent that Blaziken FB can. Also, Froslass GL is more versatile than Blaziken FB for two reasons. First, it only requires a C Energy or Energy Gain in order to use Sleep Inducer, making it easier to fit into a deck because you don’t have to include that R Energy.

The other reason Froslass GL is a little more versatile is because its second attack, “Wake-Up Slap,” requires a P Energy and a Colorless/Energy Gain. The attack is mediocre, and the only real use for it would really be for an attack on Donphan Prime with Dialga G LV.X out.

But, having this option when you’re also running Toxicroak G (either one) means that you kill two Pidgeys with one energy. (Bad analogy? Sorry about that.) That extra space could come in very handy at some time, especially if you remember those Pokémon puzzles that we had a while back (link here).

So, for this card, I believe that it should receive a 3/5, only because of its versatility is better than that of Blaziken FB alone. Granted, Blaziken FB has a LV.X while Froslass GL does not have anything to level up to. I may have given it a rating that’s a little too high, but I think it gets the idea across that this card is not to be undermined without due testing. 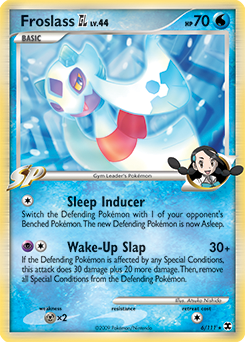