pokebeach.comAfter looking at the Card of the Day request thread (which is quite pitiful, might I add), I realized a high demand for reviews of T/S/S cards. Well, somewhere along the way I noticed Engineer’s Adjustments was requested. Which leads me to the Card of the Day…

Engineer’s Adjustments is a Supporter, so it’s effect will have to justify its use by being better than other Supporters you could have used that turn.

Its effect is simple: Discard an energy to draw 4 cards. That’s very strong draw power. It works well with decks such as Steelix or Charizard that make use of their discarded energies. Natural partners for Engineer’s Adjustments are Stadiums such as Conductive Quarry or Burned Tower, which allow you to recover energies from the discard pile.

I’d be cautious about running Engineer’s Adjustments in low-energy decks, although there aren’t many cards that are going to let you draw 4 cards. If you have enough energy in your deck, it could be chosen over Volkner’s Philosophy.

A different comparative card is Bill, which gives the measly effect of drawing 2 cards. This isn’t powerful enough to justify its position as a Supporter. The next card up in drawing power is Cheerleader’s Cheer, which allows it you to draw 3 cards, but also allows your opponent to draw 1. This could be a better card than Engineer’s Adjustments in a deck like Vilegar, but not a replacement, nor would I recommend running Cheerleader’s Cheer in just about any other deck. In Black and White, Cheren, a new Support card, allows you to draw 3 cards without penalty, which may replace Engineer’s in a few low-energy decks.

Engineer’s Adjustments is the best way to draw cards indiscriminately and quickly, and for a fairly low cost. It’s crucial to decks such as Steelix, and could probably see play in Regigigas and Charizard. It’s a pretty unique card that has found its niche and will probably keep it through the next format. I’m biased, as I run Steelix, but it’s still a great card that’ I’ll give a 4/5. 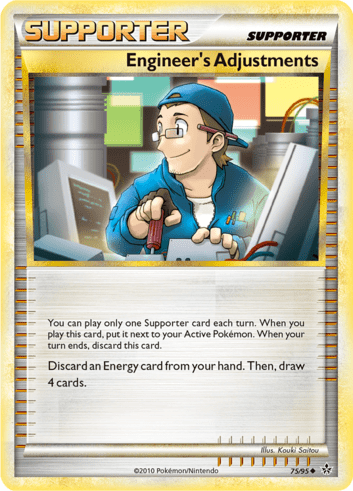