pokebeach.comAs I write this article, I have to look back at my recent mistakes and judge myself on what I did wrong. For some people this is a very hard thing to do, but alas it is very important part at getting better in anything you ever do. We all make mistakes, as you’ve heard many times before, and when you goof up, you have to reevaluate to fix things up.

So here’s the story that brings me to this topic. Rewind about 2 weeks from now. Philadelphia Regionals is coming up and we’re at League all getting ready. I decide that the Umbreon deck I’ve been running since I pretty much started playing has served me well but it’s just not cutting it anymore.

I was dieing to try something new but being a new player that just started playing last November, I wasn’t really sure what to come up with.

Now you may ask, why not pick something Meta like Luxchomp, Vilegar, ect? Well those of you that know me a little better realize I dislike playing Meta decks. Sure they get the job done and all, but I just feel the whole thing is a bit too cookie cutter for me right now. Not to say I’ll never play Meta in my life, but at least for the moment, I can’t stand our format. I live to run rogue like a ninja. (Haha..what?)

So my friend at League decided to show me this deck that he used to play with. It’s based on Glaceon LV.X and basically tries to make it so the game says, “Ok you can’t have any cards in hand, oh well with no cards you can’t attack next turn.”

pokebeach.comSo the basic idea for this deck is to use Sableye to set up quick by using 2 supporters a turn with a played one and Impersonate. You use collector to get your basics, then a combo of Luxury Ball, Bebe’s Search, VS Seeker, and other draw and search cards to get Glaceon LV.X, Giratina LV.X, and Slowking set up.

Glaceon LV.X has a Poké-Body that cancels out opponent’s Poké-Powers. The Glaceon RR uses Ice Bind for 50 and if the opponent doesn’t discard a card, they’re paralyzed next turn. Using Slowking’s Second Sight, you can choose what they’re going to top deck and try to give them useless cards. And Giratina LV.X makes it so that your opponent has to discard to attack.

Combine all this with Judge and Team Rocket’s Trickery and you can try to make it so that they have to discard to avoid being paralyzed and not be able to play any cards, or they have NO cards in hand to discard and can’t touch you the next turn.

It’s a tricky tech deck that’s really fun when you can pull it off. But you have to pretty much get the perfect set up or you sink. Having seen it in action at League and loving it, I decided to run it myself at Regionals. With less then 2 weeks left, I borrowed the cards I needed and began play testing. Here is where I made 2 mistakes.

Mistake 1: Don’t jump into a new deck you barley know before a big tournament!

As cool as the deck seemed, I had never used it before and as I said before it is somewhat of a tough deck to get going. But I was too excited to really think this through. I had thought I had found my top cutter rogue that would lead me to get some respect in Regionals. Oh how wrong I was.

Mistake 2: Play test against the Meta!

To be straight up honest with you all, my whole team loves playing rogue. So my play testing was mostly against rogue decks that seemed to stumble before Glaceon’s lock. I even made many misplays while testing that cost me good number of games, but again, being a new player and seeing a deck like this just had me too excited and I figured by the time tournament time came around I would be more focused. Wrong again. Both play testing AND real playing, I forgot to Second Sight many times and would play the wrong Supporters at the wrong times.

pokebeach.comI was still pretty confident during the 8 hour drive from Ohio to Philly. I had never seen a deck like this before and I kept it in my head this was something that no one would see coming and not know how to counter. But round 1 taught me really quick that I was wrong.

I’m not going to give you a full report because I honestly can’t remember it all, and that isn’t what this article is about. But I will show you were my overconfidence tore me apart.

Round 1 was against DialgaChomp. I actually set up REALLY quick and thought I was going to take the game. But he was quick to knock Glaceon LV.X out and I panicked. I had no idea what to do and quickly lost the game. This had also happened in many other games. I realized at this point how much the deck focused on ONE card which was a really bad idea to begin with.

Another issue I had was never being able to get the energy I needed. For some reason it always got prized or I could just never draw it. This cost me at least 2 games on it’s own. By the time round 5 came around I knew I had made a big mistake. But I decided to tough it out and finish. Dropping wasn’t an option to me. Ironically I played almost all VileGar which was funny to me because Umbreon EASILY shuts them down which made me think..

Mistake 3: Play what you know!

Even though I had played Umbreon all season so far, it had done decent for me and it was the deck I’m most comfortable with. Not only that but much of this area’s Meta was VileGar which Umbreon Prime enjoys singing “Can’t Touch This” to. Even though I did poor with Glaceon, if I had practiced a lot more with it maybe it could have been a game winner for me. I honestly believe that just using a deck your used to ups your chances of winning by far.

By the time Swiss had ended, I was sitting at a painful 0-8 record. Dead last place of the whole Master’s Division. It felt kinda bad but luckily I’m not a sore loser. Luckily the whole experience has taught me a big lesson about the game of Pokémon that I hope you caught onto while reading this article.

Sure new decks are fun and sometimes they can get you the surprise win, but you need to know what your using and how to use it before jumping into the trenches.

I think for Nationals I’m going to go back with my old friend Umbreon and take on this looming horrible format ahead that the Sableye menace brings. I’d rather fight through it with a friend I’m familiar with.

Afterward I did decent in the Video Game Tournament and enjoyed the rest of my weekend in Philadelphia with my friends. The long drive home gave me a lot of time to reflect on everything that had happened and what not to do for Nationals. The format is about to get crazy enough without me making rushed choices. I hope you all may have learned from my mistake before it happens to you.

Good luck everyone. Nationals looms ahead. I wish you all the best and hope to see you there. 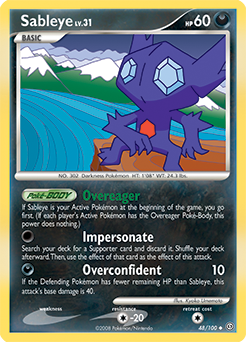