pokebeach.comAbsol Prime is a basic, 80 HP Dark-type Pokémon. It’s weak to Fighting and resists Psychic. Donphan will throw you in the dumpster, Machamp doesn’t need to hit you for weakness to KO a basic. Dark types can also make use of Special D Energy, which is a great way to add damage. Its Retreat Cost of one is certainly better than anything higher than one.

Absol Prime’s Poké-Body, ‘Eye of Disaster’, states that when Absol is your Active Pokémon, whenever your opponent adds a Basic Pokémon to their bench from their hand, to put 2 damage counters on that Pokémon. A useful power, although disappointing that it has to be in the active slot to activate. It has potential synergy with Ampharos PL, whose Poké-body ‘Damage Bind’ prevents damaged Pokémon from using Poké-powers.

Absol’s sole attack, ‘Vicious Claw’, inflicts an impressive 70 damage for a Dark and a Colorless. However, to do the damage, you must first send a Pokémon from your hand to the Lost Zone. This is the card’s bane: against Lost World decks, the most you’ll be able to attack without losing is a measly 5 times.

This does not mean Absol should be written off, a Special Dark energy raises Vicious Claw’s damage to 80, allowing Absol to 1-shot any Gengar. Also, sending Pokémon to the Lost Zone is not always a bad thing. Paired with Mew Prime and Lucario CL, you have a full deck of Lost Zone-based attackers. Absol sends Lucario to the Lost Zone, and a Double Colorless on Mew lets you use Lucario’s ‘Dimension Sphere’, doing damage based on the number of Pokémon in the Lost Zone.

Often overlooked, and certainly risky considering the existence of Lost World, Absol Prime is a card that has been largely overlooked by the competitive community. It could be a reliable Gengar counter, but failing to use it properly will almost ensure a loss. Absol Prime gets a middle-of-the-road 2.5/5. Careful use of the card’s playing-with-knives attitude could surely make an interesting deck. 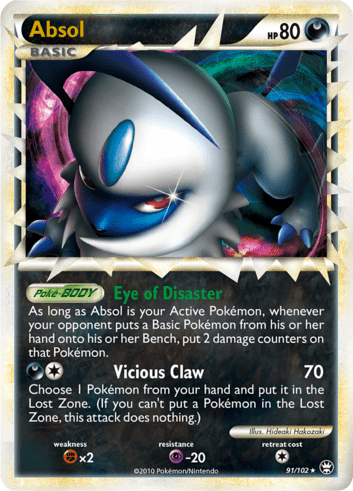