pokebeach.comkn3ll_ here with your Card of the Day! Requested by DrMime, Here’s Shuckle Promo!

Shuckle is a Basic, 60-HP Fighting type. It’s weak to Water, which isn’t a big deal at the moment, since Water isn’t very popular. Its Retreat Cost is one, which isn’t bad.

“Fermenting Liquid”, Shuckle’s Poké-Body, allows you to draw a card whenever you attach an Energy card to Shuckle. Other than this, though, there isn’t much of a reward for energizing Shuckle. Its attack, “Shell Stunner”, will inflict 20 for GC, and a coin flip heads prevents all damage done to Shuckle by attacks next turn.

Shuckle isn’t all that amazing, but could be a valuable tech when BW hits America. Emboar BW 20’s Poké-body, “Inferno Fandango”, allows you to throw down as many Fire energies from your hand as you’d like. Combined with Shuckle’s ability to pick up cards, you can burn through an Energy-heavy deck easily.

But what good is this if all the energies are on Shuckle? Well, it’s not much good, but Unown HS 54’s “RETURN” Poké-Power allows you to return all energies attached to a Pokémon to your hand.

Now you’ve got all the energy back into your hand, you can do a few things…

– Forretress LA’s Poké-body states that whenever you attach an energy to it, you must flip a coin. If the coin is heads, you put 2 damage counters on every Pokémon in play besides Forretress.

– Rayquaza & Deoxys LEGEND could become quite a threat when paired with Shuckle and Emboar.

– Using any number of Pokémon with a “Grind” attack that does damage based on energy attached to it.

Shuckle is an interesting upcoming draw engine, to say the least, and will certainly be seen in Fire decks alongside Emboar and Unown RETURN. I give Shuckle a 2.5/5. While being a useful tech, getting a lone Shuckle start will not leave you with a smiling face. Its attack and HP leave a lot to be desired. 60 HP on the bench is an extreme late-game liability. However, when teamed with Emboar and a whole lot of Fire energy, it becomes a game-winning deck-to-hand teleport device. 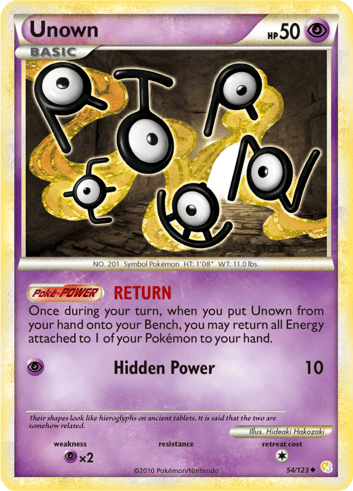