Hello SixPrizes! Thank you for taking the time to take a look at my first article here. I hope that you are all as excited as I am.

Today I want to talk about the Little Rogue that Could – MewCario. We’ve seen it around, and we’ve seen it evolve from the Palkia G LV.X variant LostCario. But what makes this deck tick? Is this deck before its time? Well let’s get started and see if we can answer those questions and more.

Now there are probably a handful of players that were at the Wisconsin Regional tournament last Saturday at the Wisconsin Dells, and most of you have already seen the decklist, but for those of you who didn’t, here we go!

pokebeach.comAnd there is a simple skeleton of 47 cards. I know that it is a skimpy list but bear with me as I point out a few options for your deck, and break down the list for you.

The real goal of this deck is to, as quickly as possible get a few Pokémon in the Lost Zone and use Lucario to clean up the opposing side of the field. This can be done several ways with Relicanth CL, Absol Prime, and Mew Prime.

Another way to play this deck is to tech in some bigger hitters or even Spiritomb AR until you can get set up. If your going to go with Spiritomb AR, you may want to consider Vileplume UL. One or two lines of Vileplume will give you the time you need to set up, as well as give you something to Lost Zone in a pinch. In a current build of mine, I’m using a 2-2-2 line and can usually set it up quickly thanks to Professor Elm’s Training Method.

I’m not sure about Rare Candy as its now being reworded to say you can’t play it on a Pokémon you played that turn, but it might come handy in some situations.

Lucario CL: This is the real meat of the deck, and a little fickle just by himself. Dimension Sphere is the most useful attack, dealing out 30 damage +20 for each of your Lost Zoned Pokémon. His other attack, Sky Uppercut, is also a fairly useful attack, dishing out 70 damage.

Next up we have Mew Prime. By now we should all know what this little guy does.

pokebeach.comFor one Psychic energy, “See Off” sends a Pokémon in your deck to the Lost Zone, but with 60 Hit Points, he’s not a very good choice of attacker, at least not until you happen to Lost Zone a Lucario CL, then this mini-tank gets the boost that it needs.

Using the Poké-Body Lost Link, you can copy the attacks of any Pokémon in the Lost Zone. This in mind, and a few Pokémon that have fallen from play, Mew Prime becomes quite the powerhouse. Granted not as strong as a Mew that’s copying a Rhyperior LV.X, but that’s a topic all its own.

Another helpful card at present is the always popular Absol Prime (Prime) for its Vicious Claw attack that deals 70 damage, 80 with a special Darkness energy just by sending a Pokémon away.

Relicanth CL: Perhaps the most overlooked card in the game right now, simply due to the terrible playability at the prerelease events. Just tack on an energy card, Lost Zone a card, and draw 3. Playing smartly could give you a boost in play, not playing it smartly could make you draw your entire deck out.

Among the cards from the HeartGold base set was Professor Elm’s New Theory. This card is great for searching out a Lucario when you need one, and can be used if you choose to go with other evolutionary Pokémon.

pokebeach.comAnother tech you could consider is a Noctowl HS Line. I consider it to be the Uxie LV.X of the next format and should be run in any upcoming metadeck simply because of the draw power it provides.

With Night Sight, you get an extra card off of the top of your deck, much like Uxie, however the drawback of potentially loosing it to a first turn out hit is relatively minimal as it doesn’t have to leave the bench.

Call this outsider perspective, but this seems to be an advantage that most people pass up, and if you don’t have the extra cash to buy a Uxie LV.X on its own, grab these up as you can as the prices might sky-rocket once rotation happens.

Yes the advantage that Uxie has is the Poké-Power “Setup” – so don’t worry Uxie, fans I’m not trashing, you can still run it.

With the upcoming Black and White set, lets take a second to think about one of the best Pokémon in that set – Zoroark.

Using Foul Play you can toss on a few Psychic energy cards and take the LostGar decks at their own game! Not only that, when it comes time for that ever crucial game changing Lost World tech against the LostGar, whom (I would assume) you have just Judged into oblivion, you can use Nasty Plot to clean up next turn.

These are just a handful of possibilities for the upcoming Black and White rules format. You can really add to the deck as you see fit and what fits your play style. Always remember guys, what works for you isn’t always going to work for some one else. 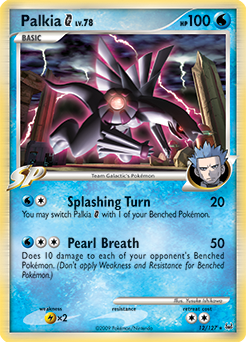