So a while ago I posted about an idea had and that was Reshiram and Emboar both being used in a deck. The idea is pretty simple: attach fire energy to Reshiram, deal 120 damage, and then repeat. A bit of discussion went on, and then Carlos Vergara wrote this pretty cool article, which included a ReshiBoar list.

However, now it’s been announced that the next format is HGSS-on, and his list is built for MD-on. Therefore, this list will be for HGSS-on.

Right there is a skeleton of 56 cards. I’ll discuss various potential candidates to fill those slots later on.

Breakdown of the Cards

Reshiram: This is the main attacker. It’s a fantastic card, seeing as it has 130 HP and is a basic Pokémon. The x2 weakness to water is a bit unfortunate, but no card can be perfect. A Retreat Cost of 2 also isn’t too great, but that could also be a lot worse, and there shouldn’t be much need to retreat him.

Then there are the attacks. Outrage for CC does 20 + 10 for each damage counter on Reshiram. Then comes the main attack, Blue Flare. FFC for 120 damage with a double discard. Wow. 120 damage for a basic is phenomenal, even with the double discard. It will 1-shot almost all basics and stage 1’s.

Being basic is also great for a few reasons. For one, it means Reshiram requires less setup. It also allows for more room in the deck. But best of all is the fact that it’s very searchable.

Emboar: This guy doesn’t have the world’s best stats, but is key in the deck. The “Inferno Fandango” ability allows you to attach as many fire energy as you want per turn. This means that you can have Reshiram hitting for 120 every single turn.

However, Emboar isn’t the best otherwise. 150 HP is very nice, but the x2 weakness to water is bad again. A Retreat Cost of 4 is horrible, but this is made up for in part by the fact that it can attach tons of energy to itself in a single turn.

It’s attack costs FFCC for a vanilla 80 damage. This is pretty mediocre, but again, it can power itself up in a single turn. If necessary, it can serve as a secondary attacker.

Ninetales: This is basically a must-have in fire decks, especially in a format without Uxie from Legends Awakened. It’s Poké-Power states that once per turn, if you discard 1 fire energy, you can draw 3 cards.

Using 1 or even 2 of these serves as excellent draw power. Be careful if you decide to set up 2 on the bench, though. You might accidentally discard too much fire energy or even get too close to decking out.

Stantler: This is the optimal starter. For a single energy, you can search your deck for 2 basics. This is great since Reshiram is a basic. I was debating on whether or not I should use Smeargle, but I think Stantler might be a bit more consistent.

Energy Retrieval, Fisherman: These cards are here to recover energies from the discard to the hand, which is extremely important because Reshiram’s Blue Flare has a double discard. They also can help fuel the Ninetales draw engine.

Flower Shop Lady, Revive, Rescue Energy: These cards are used to keep a constant stream of Reshiram going throughout the entire game. Flower Shop Lady is especially useful because you also shuffle 3 energy back into your deck.

Rare Candy: Helps you jump from Tepig to Emboar. There’s honestly not much else to say about it.

Interviewer’s Questions: It helps you get quick energy from the deck, simple as that.

Pokémon Collector: This card is a staple. You can’t not run it, especially in this deck. It allows you to search your deck for a whole 3 basic Pokémon. It’s excellent for setting up, but especially in ReshiBoar since the main attacker is a basic.

Professor Oak’s New Theory (PONT): This card is also rising to being a staple. It’s a great hand refresher, and can save you big time if you near decking out through overusing Ninetales or something.

Professor Elm’s Training Method (PETM): This card is here to search out Ninetales and the Emboar line.

Double Colorless Energy: This was Carlos’ idea. It can be used for a quick power-up of Reshiram’s Outrage on turn 1, or with Emboar’s attack if you need it. I am personally not a huge fan of it, but being able to attack with Reshiram on the first turn would be nice, especially if you snag a quick revenge KO on some basic Pokémon.

Rescue Energy: This is here to keep your stream of Reshiram constant. It provides one C energy, so it fits in nicely with Blue Flare.

R Energy: Obviously it’s important for attacks. I’m going to talk more about my choice of 14. I like running fairly high amounts of energy, especially so I can feel safe using the Ninetales draw engine a lot. Reshiram can burn through (no pun intended) a lot of this, and I like to keep the amount fairly high even with all the energy recovery cards.

The list I posted above was just a skeleton, and you could make a bunch of changes if you want. So far there are 4 empty slots, but you could easily substitute or remove things as you see fit.

Smeargle UD/CL: If Professor Elm’s Training Method becomes really popular, then Smeargle may be better than Stantler. After all, there are already 3 Pokémon Collectors in the deck.

Typhlosion Prime: Typhlosion has a Poké-Power that allows you to put 1 fire energy from the discard onto a Pokémon, as well as 1 damage counter. Being a stage 2 is unfortunate, though, and may be a bit too much effort to set up. However, it does make it easier to recover energy, and you could possibly cut out some fire energy for the line if you really want.

Ninetales UL: Although it will cost you a turn, it has an attack for a cost of 1 fire energy that allows you to take 3 fire energies from the discard and attach them to a Pokémon. This could eliminate some dependency on large amounts of fire energy as well as recovery trainers.

Zoroark with Special D Energy: Zoroark can actually 1-shot Reshiram and Zekrom really easily. Zoroark’s Foul Play for CC chooses one of the defending Pokémon’s attacks and uses it. This means that you could choose an opponent’s Zekrom or Reshiram and deal 120 damage. With a special dark energy, this becomes 130.

Emboar 19 “Theme Deck Emboar”: I’m not a huge fan of this one, but it can deal 50 for FCC or 150 for FFCC with a discard of all fire energies. He can be very useful if you’re dealing with some very high HP-decks. The nice thing is that he’s fairly easy to incorporate since there’s already a 2-2-2 Emboar line in this deck. My personal opinion would be to make the line 3-2-3 with one Emboar being the theme deck one. If you do this, you should definitely run Double Colorless energy.

PlusPower: I was looking at some of the potential main-attackers that can be expected, and a lot of them have a ton of HP. LostGar supposedly dominated in Japan, and it can be expected that it might do the same here. A PlusPower will add 10 damage to Reshiram’s 120, allowing it to 1-shot a Gengar Prime, as well as another Reshiram or a Zekrom.

Junk Arm: Can be nice in recovering some PlusPowers (if you use them) or Energy Retrievals.

Pokémon Catcher: This card let’s you choose an opponent’s benched Pokémon and bring it up to the Active Spot. Great for easy KOs. It will be annoying to deal with as well (4 retreat on Emboar is terrible, of course), but it can be super useful. It isn’t in the Black and White set, but it will probably be in the next one. This may very well fill the last 4 slots in the list.

Switch: This will probably a good thing to have once Pokémon Catcher is in the format. Safely and easily getting Emboar out of the active slot will be very useful.

Burned Tower: This interesting stadium can function as a way for you to get some energy from your discard. However, it can just as well help your opponent and this build shouldn’t have a ton of issues with energy counts.

Beartic/Vileplume: Beartic isn’t in the Black and White set, but it can be expected in a future set. I saw a thread about some guy who came up with this deck, and it’s basically ReshiBoar’s worst nightmare. Beartic has 130 HP and is water type.

That already sucks for basically everything in the deck, but Vileplume locks trainers. This is really bad because it means that you can’t use Energy Retrieval, and so will have to use your Supporter for the turn if you want to recover some energy quickly.

Vileplume Decks in General: As mentioned in the above paragraph, being trainer locked will definitely make energy recovery tougher. Vileplume will also lock Pokémon Catcher, so it might actually be a fairly large threat. If you can manage to fit it in without largely hurting ReshiBoar, then it might actually be a useful tech, since you won’t need to worry about Pokémon Catcher.

Samurott/Feraligatr Prime: This deck could certainly be a tough match sits it hits for weakness on Reshiram and will 1-shot it. An Ampharos Prime line can be super useful in the matchup, and potentially turn it around.

Why Play This Deck?

The fact is, there are a few big advantages to this deck.

1. It’s fast. ReshiBoar is easy to search and all you really need to worry about is setting up an Emboar on the 2nd or 3rd turn. However, Double Colorless Energy can have Emboar attacking on the first turn anyway. As mentioned before, a lot of main attackers have just enough HP to survive one Blue Flare. However, if you outspeed your opponent’s deck, you can tear apart basics and stage 1’s.

2. I think it’s easy to play. There’s honestly not a whole ton to do. Just get out a Reshiram, set up an Emboar, and be sure to constantly have energy in your hand.

3. It can have a lot of variation. Above, I listed about a dozen potential cards that you could use in your build. It all just depends how you want to play it. If trainer-lock is a big issue, then maybe you could use Burned Tower and more energy, but use less Energy Retrieval. If you have a lot of trouble against Zekrom, LostGar, and other Reshiram decks, then you could squeeze in a few PlusPowers or a Zoroark line.

Overall, I can see this being a mid to high tier deck. I don’t know if it’s good enough to be top-tier, but only time and a lot of playing will tell. Since it’s pretty easy to play, it might be a good deck to try out if you’re new to the game as well. Anyway, I hope you liked my first article for 6P! 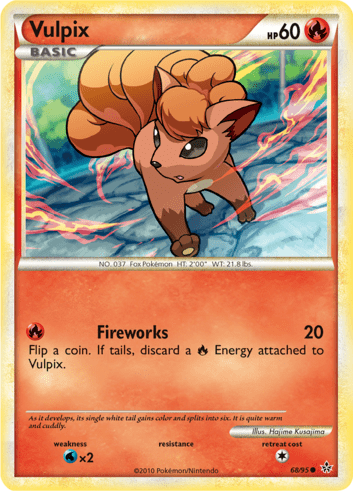