pokebeach.comHey everybody, Captain here with another Card of the Day. Today’s card of the day is Lilligant from Black and White.

Besides the cool artwork, there’s not a real ton to say about Lilligant. It might be useable as a tech in some decks, but not a whole lot else.

For the most part, its stats aren’t too good. It’s a Stage 1 with 80 HP, which is really bad. It has a x2 weakness to Fire, but that won’t even matter a whole lot because big Fire Pokémon like Reshiram would 1-shot it anyway.

However, the weakness does make it even easier to KO by some Fire Pokémon that got forced into Active Spot (Ninetales, Pignite, etc.). The –20 water resistance is good, though still doesn’t mean much. Finally, the Retreat Cost of 1 is pretty good.

Then there are its attacks. The first one, “Petal Dance”, has a cost of G and can actually deal up to 90 with lucky coin flips. However, you always end up confused. Generally, though, you can expect to deal either 30 or 60 damage. That’s actually not too bad, though confusion will be a pain. However, since this card would probably end up being just a tech, that’s not too bad.

Finally, there’s the last thing you need to keep in mind is that this card is a grass type. This means that it’s easily searchable using Sunflora, but so is Serperior. It also means that it hits basically nothing for weakness. The only significant card that it hits for weakness is Feraligatr Prime, which will rarely be in the Active Spot anyway.

So overall, Lilligant is a pretty bad card. The fragile 80 HP means it will get crushed by a ton of things really easily, and both Seperior overshadow it. The only thing I have to give real props to is the fact that the artwork is great. In fact, it’s some of my favorite art from the entire Black and White set. But anyway, I’ll have to give this card a 1 out of 5. 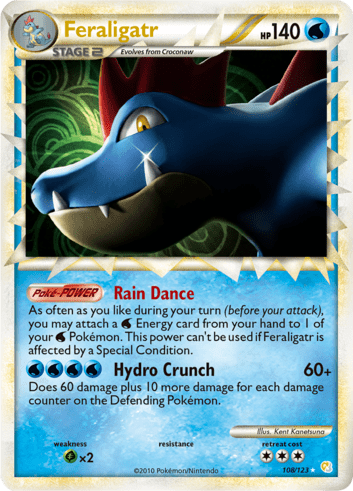