kn3ll_ here, feeling the hype from Nintendo’s E3 conference! Definitely check it out if you didn’t see it live.

After reading Mr. Herbot’s article on the Baby Pokémon this format, one in particular caught my attention: Pichu HS.

Pichu is a Basic Pokémon with 30 HP, no weakness, no retreat, and no resistance. Weird! 30 HP is terrible, but we’ll get around to that!

It’s Poké-Body, as you probably know, is “Sweet Sleeping Face”. When Pichu is asleep, it can’t be hurt by damage from attacks. That means it’s still vulnerable to some rarer threats in the format such as Crobat and Kingdra. But it doesn’t get any protection on the bench. Tough luck! But, let’s not get ahead of ourselves. How does Pichu fall asleep anyway?

For no energy, Pichu’s “Playground” will allow you and your opponent to search for as many Basic Pokémon as you like and put them on your bench, on the disadvantage that you put your Pokémon down first. It also puts Pichu asleep to activate his Poké-Body.

So, you can get you and your opponent a super Pokémon Collector. But it’s totally different. It plays from deck to Bench, which is why it caught my attention.

Pichu allows decks to get all the basics it needs, but puts Zekrom at a significant disadvantage, as Zekrom relies on putting cards from the hand to the Bench. It generally sets up a good match for both you and your opponent, a fair, fun battle for both of you.

However, Pichu is great only when one player has it. If both players run Pichu, Pichu becomes useless. I would not want to use Playground if my opponent had a Pichu. It’s just silly.

Pichu gets a 3/5 in my book as it makes for fun times and shuts down what I think to be the best deck in the format. It’s a great tool that will surely see some amount of play, especially decks that need Zekrom counters in terms of quick set-up. 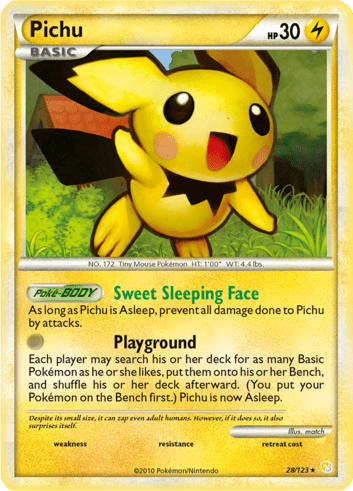