Sometimes The Pokémon Company has really terrible ways of implementing good ideas. Like rotation, or Pokémon LEGENDs. Hypno is yet another example of this.

Psychic typing, although it shouldn’t ever matter, isn’t a good or a bad thing in a format nearly free of Gengar. 90 HP, Weakness to Psychic and a 2 Retreat Cost are the least of your worries as even in the animation, Hypno is content with sitting. On your Bench.

Hypno’s Poké-Power, “Sleep Pendulum”, instructs you to flip a coin in order to put the Defending Pokémon asleep. Helpful in decks such as Leafeon, Muk, or Musharna that rely on status conditions to deal their harder damage.

“Psychic Shot” does an unbelievable 30 damage for a Psychic and two Colorless. Hypno doesn’t stop bringing the pain there, he’ll even do 10 damage to a Benched Pokémon as well!

…All joking aside, please never attach energy to Hypno.

Sleep Pendulum is a really good way to make players think Hypno is a good card. But a 50% chance to sleep doesn’t translate as much as most would like it too. Muk and Leafeon would do much better on a more reliable way to inflict status, like Roserade UL. Musharna should always include some amount of Hypno, but there’s a reason that Musharna isn’t a very popular deck.

Any deck not making use of status conditions has no need for Hypno. If you were to win the coin flip, your opponent still flips a coin to see if their Pokémon wakes up between turns. That’s a 25% chance to avoid one attack/ability. With the relatively high Retreat Costs this format (and arguably a lack of decent T/S/S), Switch is being run more and more often.

Hypno earns a 1/5. Perhaps one day we’ll see a better way to implement the idea. 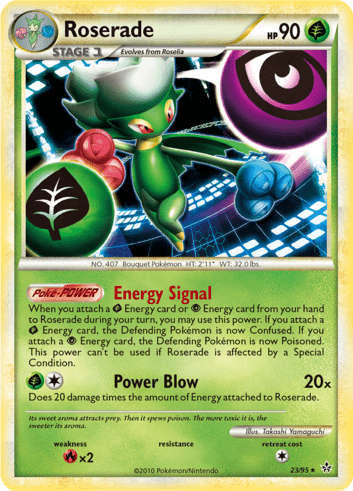