pokemon-paradijs.comHey guys, I’m really sorry about this delay. With that, this video isn’t exactly what I was hoping, but it’s pretty good and I hope it can help some of you guys with some in-game play and fill that want you guys were looking for.

I’ll provide a few extra comments on the game that I didn’t get a chance to say during it that might be important and useful knowledge for you guys. Likewise, if you see something I did that doesn’t make sense to you, I can provide some insight into it.

The actual game wasn’t as exciting as it could have been (I wish I taped the game my brother and I had played right before!) but still, I think a lot of what you guys are looking for in a video of a game is there. Also, I was definitely trying to emphasize the plays I made with Emboar/Magnezone more so than the Donphan/Machamp deck.

The game was pretty much decided at 20:30 when Donchamp Reversaled up Emboar and hoped that the Emboar/Magnezone player couldn’t get it out of active that turn, but when he was able to, the game became almost unwinnable for the Donchamp side.

If Emb/Mag wasn’t able to get it out active, Donchamp could have KO’d it the following turn and possibly mount a comeback, as then Emb/Mag would have no Energy acceleration, severely setting it back.

At 24:45 all comeback ability for Donchamp was lost when Tyrogue stall was stunted by Emboar/Mag’s own Reversal heads, KOing Donphan and sealing the game, allowing Bad Boar to KO it and Magnezone to draw the last prize.

The Video (split into 2 parts)

(videos are both unlisted on YouTube, so only Underground members can see them)

Analysis of the Game

pokegym.netEmboar got some really good early flips. Staying asleep with the babies was really clutch in not going down on prizes early to Donchamp, which is where the match can be won. Donchamp also didn’t have any crucial Reversal KOs which can really swing the matchup as well. Because of this, Emboar was easily able to withstand the early game and sail through Donchamp with Bad Boar.

There were only a few times I think where my play could be considered a misplay. When the first Magnezone came out and I was able to 1HKO it with Donphan, and instead I Reversaled the one with the Energy, maybe that wasn’t the right play, as I could have saved that Reversal for the next turn or the turn after and gotten another KO on a useful Pokémon for Emboar.

When I Communication the Phanpy away instead of Machop was one of them, perhaps keeping Phanpy would have been the better play. Let me know if you see something you think might be a misplay, and I can try to explain my rationale, or confirm that it was indeed a misplay!

In the past few days I’ve played the Emboar/Magnezone vs Donchamp matchup a bunch of times and it’s definitely in Emboar’s favor. The only games where Donchamp can even compete is when they get some good early Reversal flips and Emboar can’t hide behind babies at all. Bad Boar is too much of a burden for them to overcome.

Zoroark might be necessary for this. Bouffalant is nice so they can’t get greedy with RDL, but doesn’t deal with the more advanced problem of Bad Boar and how much havoc it can wreck against Donchamp. My brother and I are going to be trying a straight Donphan/Zoroark deck, as Machamp has been underperforming in almost all of our games.

pokemon-paradijs.comThe games generally come down to Reversal flips and being able to 1HKO/2HKO things, so PlusPowers and Junk Arms are getting maxed, as well as another draw card or two being added. As you could see in the recorded match, there were a couple times where Donchamp was left drawless and had to topdeck into one (which it did, thankfully, otherwise the match would have been even more lopsided than it already was).

Emboar, on the other hand, ran quite well, and has been running quite well in almost all of my games. It’s rare not to get a T2/T3 Magnezone with the huge line, and the Emboars come soon behind them. There’s been two internal problems with the list, which I think can be remedied through some minor tweaking: running out of Energy, and decking out.

I think running out of Energy can simply be fixed by playing more and realizing the importance of each Energy drop. I did this pretty well in the recorded game and didn’t overextend myself, so I didn’t find myself vulnerable in the last few turns. However, even when playing carefully, sometimes it’s impossible to avoid.

I think Sage’s has a little to do with this, so maybe picking a different Supporter might help, but the coverage that Sage’s offers is very nice. I might try Engineer even, but we’ll see. Decking out should be able to be covered by simply adding 1 Judge or Flow Shop Loday. Leaning toward Judge right now, so maybe even running 2 Sage/1 Judge might do enough to help with both problems, but we’ll see.

The 2 Reversal are proving to be nice against babies and the mirror especially. Would love to find room for more, but I don’t know if that’s going to be possible. A PlusPower or 2 would be very nice as well, allowing Magnezone to KO Donphan for 3 Energy instead of 4, which is a huge difference. I’ve found myself hitting Donphan with Tyrogue for 10 a bunch of times, in the hope of surviving the turn and setting up an easier 1HKO with Magnezone.

pokebeach.comI don’t really have all that much more to say about these decks, but I feel like I’m missing something, so please ask questions and I’ll provide some detailed answers. Again, this is my first time doing a video of a game so I don’t know exactly all the specifics of what everyone wants to see, so I want as much input as I can get to make any future attempts at this even better.

As for Nationals in general, I’m just going to leave you guys with a few tips that I can think of real quick, as this will be my last article before then I believe.

– Magnezone is a god. Any deck that runs Magnezone gets such a huge boost in consistency compared to the rest of the format, it’s insane. I’m not saying that every deck needs to run Magnezone, but I’m pretty convinced right now that Magnezone is the best partner with Emboar and there’s definitely other decks that could use him well.

I know people have been toying around with Magnezone/Yanmega, and something like my Magnezone list from my last article could even potentially do well. Likewise, Donphan becomes that much stronger of a card for this reason as well: he is by and far the best Magnezone counter.

– If you’re not playing Magnezone, you need to run a ton of draw cards. I started out with a standard of 8 draw cards in a deck with no Pokémon-draw, and since have increased it to 9, and I think it’s going to get bumped up to 10. Being able to play a draw Supporter every single turn is too valuable in this slower format with minimal Pokémon draw.

– Cleffa is great, but I find myself lowering it to a count of 2 in almost all of my decks. I think Tyrogue should be included in most decks as well, and this is also part of the reason Cleffa has been decreasing in my lists. With the bigger Magnezone line in Emboar and more draw cards in other decks, the usefulness of Cleffa goes down. I would be hesitant to drop below two, though, as you don’t want to prize it and need it as a crutch in a game.

– Collector vs Dual Ball is a debate I’m still up in the air about. As you could see, in Emb/Mag I ran Collector, while in Donchamp (and other stage 1 decks) I prefer Dual Ball. I think decks without the Pokémon draw enjoy Dual Ball more, so they can use their supporter for draw. In Magnezone and Ninetales decks, though, I do think Collector is better now.

– For the actual tournament of Nationals, be prepared for everything. Make sure to test against as many different decks as possible, even if it is only a few games against each. This will give you at least an idea of how to approach each and every game, because it is very likely that in 9 rounds of swiss at Nationals, you’ll be playing against at least 5-6 different decks.

Each matchup requires a different strategy, so even if you have a basic outline on how the game should play out, you’ll be at an advantage. Similarly, try to play with a bunch of different decks, while focusing on your main choice.

You want to be able to be in the head of your opponent. Refine all your decklists so yours can most resemble the best ones that you’re going to be playing against.

– Lastly, I just want to point everyone back to my two articles from back in the fall, Beginner Tips and Advanced Tips. Going into Nationals, remembering all of these things will help you exponentially in playing every single game.

It’s going to be a long three (hopefully!) days, so you want to make sure you’re mentally prepared. So much of Pokémon is not even in the decklists and the actual in-game play – it’s in all the extra stuff that goes on. Remember this and you will greatly improve your chances of doing well.

Good luck to everyone at US Nationals (and international Nationals as well!) and I hope I can meet some of you there! Don’t be afraid to introduce yourself, you guys know what I look like, I don’t know what you all look like. :P 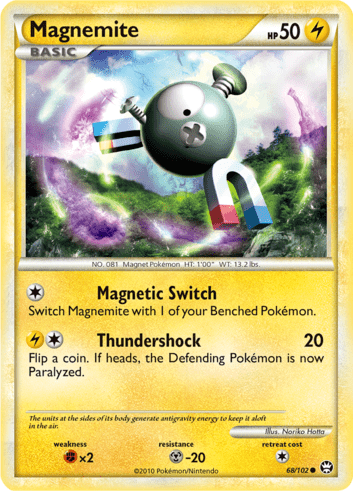