pokebeach.comA fairly popular baby, Tyrogue is a small-but-fierce competitor in the babies released in HGSS era.

Tyrogue, like all babies, has 30 HP and no weakness, no resistance, and no Retreat Cost. These aren’t bad when we add in the “Sweet Sleeping Face” Poké-body (which makes Tyrogue immune to attacks while sleeping) and all baby moves causing them to fall asleep after attacking.

“Mischievous Punch” hits for 30, unaffected by weakness or resistance. Of course, it also puts Tyrogue to sleep.

30 is a good number to hit for, 1HKOing all baby Pokémon that aren’t asleep. This is why most people recommend at least one Tyrogue in a deck: it’s easily searchable, and with a free attack that KOs the most popular starters, it often ends games before they start.

I think Tyrogue could be a somewhat hilarious late-game threat to many decks if paired with Black Belt or PlusPower- Against Zekrom, Tyrogue can 1HKO with Black Belt and prevent another Bolt Strike with PlusPower.

The reason you don’t want too many Tyrogues is because later they become dead-draw- There’s no point in laying down Tyrogue past turn 2 against anything he won’t hit for weakness. He also shouldn’t be your only starter, as if the opponent doesn’t start with a Baby (or something weak to Fighting, whatever that may be), then Tyrogue’s pretty useless. 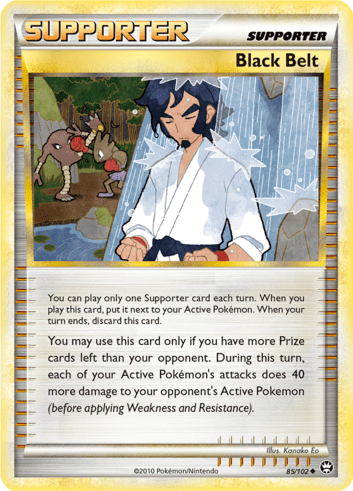