Hello once again, Pokémon Community. Zackary “Cabd” Ayello here again today, with a decklist and analysis of my personal favorite deck, Yanmega Magnezone. Named “Megajudge” by its creator, this deck took home a City Championship purely by surprise. Now, with the rotation in effect, it is one of the few viable MD-on decks that retains the majority of its Pokémon lines.

Unfortunately, a combination of lack of finances combined with some short handedness at work means I will not be making the trip to nationals this year, so I have no qualms about releasing my HGSS-BW decklist. If Nationals were tomorrow, at my house, this is the list I’d take, without a second thought. My personal name for this deck is “Yandere” which is best Googled, if you don’t know what it is from.

pokebeach.comFirst of all, 3-3 Yanmega. Yanmega is your early game attacker, and only has baby killing and stalling use in the late game. Your ideal is to get Yanmega swinging for 70 damage on the second turn, third turn at the latest. For this reason, you run heavy counts of Supporters that maximize this chance, namely, 7 Supporters that force the hand sizes to match, allowing you to hit with either attack for free.

This is also the reason for the inclusion of Spiritomb, as “Spooky Whirlpool” can force your opponent’s hand size to 6. While that would usually help your opponent more than it would hurt them, the idea is that you can Collector for Spiritomb, and however many more basics you need to equal six cards in your hand, thereby not using one of your hand matching Supporters that turn. With Seeker, it gives you just a hint of disruption ability as well.

2-2-2 Magnezone will sound really thin on paper, but with Rescue Energy, and the fact that you won’t be using him early game, it’s fine. Flower Shop Lady allows you to get the entire line back if anything goes horribly wrong. Being able to both draw to match hand sizes, as well as hit for a ton of damage, makes Magnezone a feared late game attacker. Shaymin and Pachirisu are here to allow Magnezone to power up faster if need be.

The 1 Zekrom may leave people scratching their heads. Why would I use him outside of a ZPS deck? The answer is Umbreon Prime. Umbreon shuts this entire deck down, otherwise. Yanmega has a Body. Magnezone has a Power. Yanma has a Body, and can’t attack anyway. Magnemite and Magneton get 2HKO’d without a way to 1HKO back. Pachirisu has a Power. Spiritomb cannot attack.

See the issue? Zekrom, however, is free to attack. If you see Umbreon on the way, you can search this sucker out and drop him on the bench, ready to outrage his way to an Umbreon kill.

pokebeach.comIn most decks, Tyrogue is a great, lucky way to get the donk. In this deck, he’s even better. Over 50% of your basic Pokémon retreat for free. The other half retreat for one energy, with the ONE exception of Zekrom. For that reason, in testing, I’ve gotten a very large number of donks with him. He’s a definite in a deck running Yanmega, that’s for sure. Often, in testing, I was able to use him to do the last 20-30 damage for a Knock Out, then I was left invulnerable next turn.

The 2 Cleffa is pretty much standard, providing both a wall and a way to get needed cards and evolutions in the early game. In the middle and late game, it becomes Junk Arm fodder, and should be Seekered up if possible, as in testing, there were plenty of times where an opposing Zoroark would copy linear attack for a free prize.

Now for the Trainers and Supporters.

First off is the single Lost Remover. Lost Remover is a card that you will always find in a deck I make. No matter what the build, with the exception of maybe Vileplume decks, I always have a lost remover. It just has too many uses in this format for me not to.

Against Tyranitar, I can target Double Colorless Energy or Special Darks. Against Lostgar, Rescue. Against Donchamp, DCE. Against Samurott/Donphan, Rainbow. Against Leafeon, Rainbow. Against Steelix, Special Metals. Against Cincinno, Zoroark, etc, DCE. It’s good against practically every deck that is not Emboar-based, and even some of those have begun to tech in a Rescue or two.

Energy Retrieval is there purely for situations in which I either need to recover energy from a killed Magnezone, or late in the game where I can drop Pachirisu and mount a surprise Zekrom hit. Both the Retrieval and the Lost Remover are also searched by my Twins, and both are compatible with Junk Arm, so it often feels like I have multiple copies of each.

Four Pokémon Reversal is quickly becoming a staple in most decklists. The ability to gust up an opposing Pokémon, as well as bypass a sleeping baby, is just too amazing to not include. I use a full play set of four primarily due to the flippy nature of the card. Once again, this card is also Junk Arm compatible.

I run three PlusPower for a multitude of reasons. It gives me a decent shot at donking 40 or even 50 HP basics with Tyrogue, and I’ve even managed to donk 70 HP Pokémon using Pachirisu. Against Tyranitar Prime, Yanmega Prime, Krookodile, and several other Pokémon, a PlusPower can save me an energy that I do not need to Lost Zone.

Two PlusPowers also allows me to kill Zekrom after he uses “Bolt Strike” without any Lost Zoning, with a 90 damage “Sonic Boom.” Once again, like a broken record, I note that these are also compatible with Junk Arm.

Three Pokémon Communication, in my testing, has been plenty. This card allows me to send things back into my deck for something I can use, and if there’s a Pokémon in my hand, also allows me to decrease my hand size by one if I need to match it. Also, if desperate, I can use it to stop myself from decking out in the end phases of the match. As always, it is Junk Arm recovery allowed, meaning I have up to six uses if I REALLY need it.

I play three Junk Arm because they let me re-use both my single teched Trainers, as well as anything else I might need. Their synergy with “Magnetic Draw” is just sickening, too. In addition, they can be used to match hand sizes with a play of Judge, Magnetic Draw, and then Junk Arm.

So long as you leave the Trainer you choose in your hand, you’ve now traded 2 cards you no longer need for two new cards from your deck, and you’ve also gotten back a Trainer card you can use again.

pokebeach.comTwo Seeker are included as a means of recovery, a way of getting my own babies off the field, and a way of re-using Shaymin, Pachirisu, and Spiritomb. They also allow me to pick up heavily damaged Magnezone and wall with Yanmega while I re-establish them.

Three Pokémon Collector has been enough in my testing, as I run so many forms of hand refresh that I often have my bench established without seeing a single Collector, by turn two or three. They make decent Junk Arm fodder, and also allow me to grab extra babies form the deck, ready to be Junk Armed away, instead of valuable cards.

The single copy of Flower Shop Lady is designed entirely around the basic rule of this deck: “Don’t deck yourself out.” FSL also, as noted earlier, serves as a way to recover a Magnezone line if needed, or a Yanmega line and another Pokémon.

The single copy of Twins seems kind of iffy, but due to the pure amount of shuffle draw in this deck, I’ve never had much issue with needing it and not having it accessible.

I run four Judges because both Yanmega and Magnezone love Judge to death. There’s a reason this deck was named megaJUDGE after all. Judge allows disruption, hand size matching, and hand refreshing when paired with Magnezone’s power.

The look on an opponent’s face after using Nasty Plot, or Twins, Legend Ceremony, or even Eeeeeeek, is priceless. In addition, it’ll make them very weary of easing Smeargle, if anyone still even runs him anymore.

Three Copycats serves two main uses. First, it gives me a way to force hand sizes to match, so I can use Yanmega. Secondly, it can singlehandedly win me games. Certain Pokémon * cough cough Ninetales * tend to give people VERY large hands. I’ve often been able to draw somewhere around 13 or 14 cards form this Supporter, which gives me an amazingly vast amount of options.

Some notable options in this deck that I choose not to run include:

Feel free to try this deck out, and by all means give me your thoughts, good, or bad, so long as you refrain from simply bashing. Praise is good, but constructive criticism is even better.

Also, feel free, if you’re wanting to, to take this exact list to your nationals if you truly feel that it is a good deck. All I ask is that anyone who uses this list as inspiration post either here or on another Pokémon website chronicling their journey into first place (Ok, and any other place too). I want to see this deck do well, even if it’s not me behind the wheel. 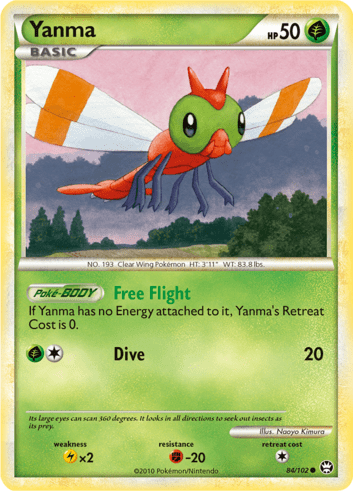