Wait, wait, wait. Monkeys and Weasels? This is a Pokémon article! You can’t be talking aboutreal-life animals!

Sir, please lay down. Now, tell me, what did you see in Canada’s Nationals that you found to be unexpected?

Well, all of the Yanmegas and Kingdras seem surprising to me. And the lack of MagneBoar and DonChamp, definitely. Ummm… Also the Vileplume deck thingy with the outrageous amount of Pokémon. And what’s with that Ambipom/Weavile deck?

Good, good. I was hoping you’d pick up on that last part. How would you sum up this whole list of the Top 16?

I can see where you’re coming from. There’s a lot of Magnezone and Yanmega, but the field still has a lot of variety because they are not all the same decks. Much better than last year’s. *cough* LuxChomp *cough* *cough*

So what’s going on with that Ambipom/Weavile deck? It just seems so out of place, like it shouldn’t even… Wait, monkey and weasel. That’s what this article’s going to be about isn’t it?

Correct! We have a winner!

Why are we talking about this deck anyway? You continuously complain about your horrible luck and need of consistency, yet you’re trying to make a disruption deck? How is that even possible for you?

Have you seen the list that he used? Here it is:

What an amazing combination of efficiency and speed! It’s ultra-consistent, so this is definitely a disruption deck that I would be able to play. Very concise, very simple. Quite enjoyable to see something so simple.

But there’s no Cleffa.

Yes, one thing that I do not like, but I believe was the proper play considering what he was going up against at the tournament, specifically Yanmega and Kingdra. As one of Alaric’s friends said, “Live by the Cleffa, die by the Cleffa.” It could be added, but it is definitely not the best option for this deck.

Okay, but how is that managed? It seems fairly difficult.

First, you have Weavile’s Claw Snag, with the ability to discard one card from your opponent’s hand. You can specifically choose which card will destroy their setup for the next turn. You also have Ambipom’s Astonish to shuffle two cards from their hand into their deck.

With a Judge, and having both of these to play, you could essentially bring your opponent’s hand down to one card, or even none. And with Slowking controlling the topdecks, it gets pretty hard for your opponent to recover.

That seems to be a lot of factors.

True, but we must also remember that Aipom has the attack Initiate, which allows you to draw until you have the same number of cards in your hand as your opponent. If you get a good start, it can get better. If you have a bad start, you can play out your hand and try to make it better.

Sneasel has a free-Retreat Cost, so it acts like a baby in that aspect, but it can also attack very well with Beat Up, just like it did in the old days before it got banned. The deck also runs Juniper, which, as my friend magneto1992 says, if the deck doesn’t outrun Magnezone or Ninetales, it has to run Juniper.

Agreed. So, what’s up with his tech lines? I can understand Donphan and Buffolant, but why Xatu?

Well, as you’ve probably guessed, Donphan was put in place for the Zekrom matchup and Buffolant was included for the possiblility of RDL and the great revenge attacker that he is. Donphan’s ability to tank was also something that did not need to be considered lightly because if you’re struggling, tanking is a great way to give you time to get back into the game.

Xatu, however, was a strange tech that has seen a little bit of talk around the TCG forums. It was really placed there just so he could hold off the Donphan and Machamp threats. One thing that he actually did not expect was the damage dealt to Machamp with Psywave; 160 against a fully loaded Machamp with weakness.

Confuse Ray is also a very nice attack because status conditions force a switch, which is very important when maintaining the control that you already have over your opponent.

And what’s with the Tyrogue? No Cleffas, but still a Tyrogue?

Let’s think about it. With four other Pokémon with a free retreat, the chance of obtaining a donk is actually fairly high, not even counting Sneasel’s Fury Swipes, which, with a special Dark and two heads, donks a baby Pokémon or Hoppip. With those opportunities to donk, why not go for it?

True. Okay, but what about the Trainers that he runs? I mean, Dual Balls and four Seekers? No Super Scoop Up? And Professor Juniper? Really?

pokebeach.comHold on, hold on! I’ve already explained Juniper above, because a deck can’t compete unless it has an engine. Professor Juniper is the engine of any deck without Magnezone or Ninetales. The Dual Balls are, at least in my mind, the perfect choice for play because he uses a 3/2 split of Pokémon Collector and Dual Ball, making sure thatin some instances he can still search for a basic and use his suppporter for the turn. I personally prefer the 2/3 split, but to each his own.

The Seekers are an obvious choice, because they provide a great tool for disruption. You can Seeker up a Weavile to play it back down on an unused Sneasel, and then use Ambipom to shuffle back two cards from your opponent’s hand, possibly including the Pokémon that they had just picked up.

After your opponent has already had a bad bit of disruption, why not make sure that they’re kept under your lock. As for the lack of Super Scoop Up, they’re flippy. The possibility of not picking up one of your Pokémon as compared to having a sure pick up and forcing your opponent to pick up one of their Pokémon on the bench. I’m definitely going with Seeker, even if it is my supporter for the turn.

How do you win with no heavy hitters?

It’s a little harder, but by keeping your opponent’s heavy hitters off of the field, you tend to be able to Knock Out all of your opponent’s Pokémon as basics. That should keep you fighting the whole way through. However, if your opponent does set up before you, it becomes almost impossible for you to win. Might as well take the risk if you know that by completely crippling your opponent’s setup, you essentially win.

However, with more time, I’m sure that more people will come up with better techs for this deck, but I still assume that what he has come up with is one of the best choices.

Well, what do you believe should be added as techs?

Honestly, I don’t have many ideas for this, but I do know what not to play. First of all, no Zoroark. The weakness that he has makes it too difficult to fulfill a counter role, and Bouffalant definitely does the same. And as much as I love Cinccino, I also believe that it is not the right play because of the Weakness, again.

However, there are other ideas. I like the idea of putting in Yanmega as a backup plan, because it does counter the Fighting weakness and goes with the overall strategy of sniping babies (That sounds terrible, doesn’t it?).

I also like the idea of putting in Jirachi UL, because it punishes the Rare Candy lines. However, Jirachi requires multiple energies, so I doubt it will work as well as I think it could.

I think I’m finally starting to get this deck. Anything else?

No, I think that everything else can be explained through testing the deck yourself.

Wait, you haven’t tested the deck yourself?

No. What do you think I am? A super player? I just heard about this deck a couple days ago.

Why do I keep coming to you for Pokémon deck help then?

Because I don’t charge you? I give you ideas that can form into your own deck strategy? Not everything is playtesting.

But most of it is. 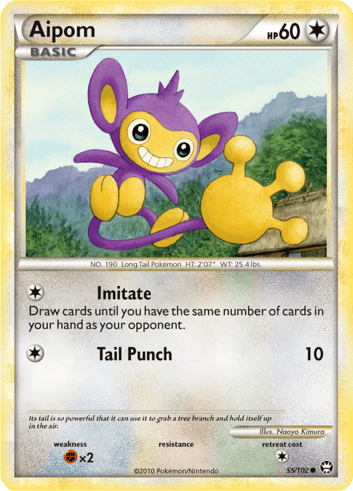