Hey everyone, today I will be talking about the card and decks that did well at US Nationals, and how they will affect the World Championships in San Diego.

What US Nationals Represents

pokebeach.comUS Nationals is ONLY the biggest event in the world (in terms of amount of people) and it’s usually the last or second to last major event before the World Championships. The decks that do well there usually are represented well at Worlds because people think: “Well, if this deck can win an event with a thousand people, then it must be able to do well at Worlds.”

Then some other people are thinking: “Well, if everyone is going to play this deck because it won, then I must play a deck that beats it.”

An example of this was Nationals 2009 when Pooka won with Luxape. The format leading up to that event was Gengar, Palkia Lock, and a few other variants. After Nationals, Luxape became a big deck and everyone thought it was going to sweep Worlds.

When Worlds came around a lot of the people were playing Luxape, but there were also a lot of people who played Flygon because it had a good match against Luxape and the other SP decks that were popular at the time.

Both decks did well at worlds that year. (not winning but making T4 and finals appearances) But because of what happened at US Nationals that year 2 decks that had seen little to no play became big contenders to win worlds.

Enough about the past, let’s talk about whats happening in the present and how it will affect the future.

pokebeach.comNow if you look at these results you will hopefully see something: Yanmega Prime.

If you are only looking at Senior and Master results (sorry Juniors) you see that both divisions have the same 2 decks in the finals, all with Yanmega Prime. One being Yanmega/Magnezone, and the other being a deck I call Stage 1s, I’ll go into greater detail about both decks now.

Yanmega/Magnezone is a deck that started seeing play only a week ago at Canadian nationals, where it made multiple T8 appearances. Now at US Nationals it is in the finals of each division.

The main focus of the deck is to attack early with Yanmega for free using a combination of cards to make your hand the same as the opponents, cards like Judge, Copycat, or Magnezone’s Poké-Power make this possible.

Then because you are attacking for free, you may attach all your energies to Magnezone Prime and use Magnezone’s attack to be able to finish late game. This is a very affective strategy and it has proven to work well.

pokebeach.comStage 1 on the other hand is very different. Yanmega is used so that you can attack for free and then set up the other attackers. Donphan can deal with Magnezone and Zekrom and it’s a will survive a hit or 2. Zoroark has the ability to 1HKO many Pokémon and I will talk more about it later.

My friends and I started testing decks that were made up of multiple stage 1 lines when B/W came out and as we figured out the format they all included Donphan and Zoroark, but the 3rd one has been up for debate. Yanmega is a strong card and probably one of the best in the format right, now but I never liked how it worked in this deck.

You have to dedicate many slots just for the cards like Copycat and Judge and you don’t want to be doing that in this deck when you want to be able to get lots of different lines out and use lots of resources fast, it’s like playing Judge in Luxchomp.

A few other cards have been thought of to take its place but the one I liked most is Cinccino, it hits for 100 most of the time so you can 1HKO pokemon like Yanmega prime if you have a PlusPower.

Now who am I to say what cards should be in this deck because the version with Yanmega just won Nationals and came second with the best player in the US right now; it’s just a suggestion.

Another deck that didn’t show up in the finals of any age division but still worth noting is Reshiphlosion. This is a deck that Consists of Reshiram as the main attacker, Typhlosion Prime to power up Reshiram, and Ninetales to draw cards.

As I said it had not finals appearances, but it did well and showed up many times in top cut, the reason why this deck is good is because it can set up consistently and has a good late game. Reshiram’s 130 HP for a basic allows it to last for at least 2 turns and having the ability to 1HKO most pokemon makes it hard to keep up with.

Like I have said, US nationals will affect what decks are played at worlds and what techs people will include. I will provide a list of cards that I believe need to be talked about when considering world’s decks.

pokebeach.comMagnezone Prime has been hyped as one of the best cards in the format because it’s a very good attack as well as a draw engine, but it has the major setback that everyone is targeting it. One of the major reasons what Donphan is good is that it can 1HKO Magnezone with a PlusPower.

Also there are decks with Muk and Vileplume that drag up Magnezone make it poisoned and confused and they can’t use Trainers so they can snipe around while you’re trying to power up Magnezone to retreat.

It’s also a Stage 2, so you must put more resources into getting it up and the fact that Kingdra/Yanmega will kill it often before it is up or right after you get it up.

Don’t get me wrong, it is an amazing card, but it’s not as good right now because everyone is trying to stop it.

Yanmega Prime is the opposite to Magnezone in the sense that it wasn’t hyped very much at first but after Canadian and US Nationals its considered one of the best cards in the format.

It sets up turn 2, it can attack for free, and it can snipe basics and babies. It works well with a lot of cards like Magnezone, Kingdra/Jirachi and Stage Ones. People will start shoving Yanmega into every deck they can think of now because of its flexibility. It may be very good now but like Magnezone Prime it will be targeted and if people really want to beat it, they will.

pokebeach.comThis card has shaped up to be a very good counter in this format. Let’s look at everything that it can 1HKO:

Yes, some of them require a PlusPower to 1HKO, but it’s still a good list of cards; it is only meant to be a tech card and can fit into many decks because of C energy cost.

Donphan Prime may not be good against Yanmega prime but it is nearly impossible to 1HKO in this format and that is very good to have. It deals a good amount of damage and if it lasts for a few turns it can completely turn the tides of games.

This format is all about prize racing, and this is one card that help you if you are down on a prize race.

Reshiram has a very high HP for a basic and can deal a great amount of damage consistently. Paired with Typhlosion it can set very fast and recover well, most decks will have a problem keeping up with Reshiram.

In conclusion, I believe that Worlds will have a fair showing of decks like Yanmega/Magnezone, Stage 1, and Reshiphlosion based off of their performance at Nationals. They will be the decks that everyone is trying to beat going into worlds and this format is still very young and I am sure there are many undiscovered decks that will surprise us at worlds.

As for myself I suggest some sort of variant of Stage 1 or something completely rogue that nobody will have answers for. Just remember a few things when deciding a deck

Check out my YouTube channel where my friends and I have made videos on various Pokémon TCG things like games, deck techs, trade binders, pack openings, set reviews, and general Pokémon TCG News/Strategy. 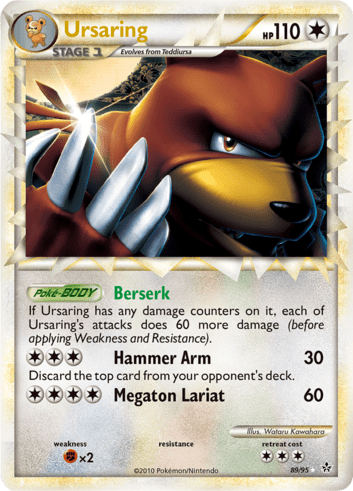