pokebeach.comHey guys, Captain here with another Card of the Day. Today’s card was requested by scenia in the Card of the Day Request Thread and is Pokégear 3.0 from HeartGold & SoulSilver.

Being a Trainer card, there isn’t a whole ton to say. You get to look at the top 7 cards of your deck and can pick a Supporter you find there and put it into your hand. I should mention that this card is only useful in some decks.

For example, decks with their own draw engines (like TyRam with Ninetales) wouldn’t have much need for a card like this. Decks without much draw power, and especially decks that need quick, early draw power can make this card much more useful. How useful it is will also depend on if you decide to run Cleffa or Manaphy.

One example of a deck where this is useful is in a speed Zekrom deck. Often, Zekrom decks won’t even run Cleffa, so it’s very important to get the Supporters you need quickly. Having Pokégear can greatly improve your chances of getting a Pokémon Collector, Professor Oak’s New Theory, or Professor Juniper (depending on which one you might need) turn 1.

Like I mentioned earlier, this card can be very helpful where your draw power is based fully or almost-fully on Supporters. Relying on topdecks won’t always work in your favor, and luck will have a bigger role to play, which is something Pokégear can help you with. Being a Trainer, it can also use Junk Arm to bring it back from the discard, which might help you grab a draw-based Supporter in the mid to late game.

Recently, I wrote the Card of the Day on Cubone TM, and I’m experimenting with a Cubone stall/annoyance deck. Because I want to deny the opponent as many prizes as possible, I decided not to run Cleffa (especially since I don’t want to risk being donked).

For this reason, Pokégear helps me grab Supporters quickly, and Junk Arm lets me reuse Pokégear while also discarding Marowaks. Because of this, I get a pretty consistent flow of cards in my hand. One last thing I’d like to mention is that Pokégear can also be used for deck thinning if you really need it to.

Overall, I think I’d give this card a 3.5 out of 5. Depending on what deck you’re playing, it can be very helpful or completely unnecessary. Regardless, it’s one of the only methods we have of searching for Supporters, and I feel it shouldn’t be overlooked. 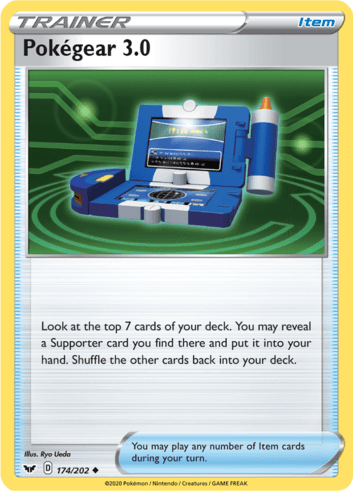