pokebeach.comFor those of you that don’t normally look at card scans before the official release (and I’ll hopefully talk about this in a later article), one card that has been turning heads since its leak from the Japanese Black and White set is Beartic.

This beast of a Stage 1 Water Pokémon has a very unique attack and for one water and a DCE you deal 50 damage. Now, at first that seems medicore, and even poor for the cost of three (or two) energy, where this attack really shines is its effect. Your opponent’s defending Pokémon can’t attack next turn.

Now before we immediately claim that this is game-breaking, which it may very well be, we must remember one very important thing: evolving or switching out the active Pokémon renders this effect useless.

However, many of our heavy hitters in this format have high Retreat Costs, so having to force your opponent to retreat or waste their resources to get their active away from Beartic’s attack is not a bad thing. The most important piece of advice that you have to take into consideration when you’re dealing with an untested, but amazing, card is that you must remember that it has weaknesses. J-Wittz alludes to them in his COTD for Beartic.

So with all of those problems that this card has, why am I still talking about it? Because that attack can do something amazing. The extra hype will probably not help it out at all because it needs to be relatively unexpected.

However, there are still ways to build this deck, and my friend Lee has been working on building a skeleton. His forum thread is here where he talked about Beartic and his effects, if you want to check it out, but there are no lists on his first entry. Luckily, he has given me a skeleton list of his Vileplume variant of the deck.

As you can see, there is a lot of variance given in this deck, giving you a range of 52-76 total cards! Of course, this is all based on player preference, meaning that you take the minimum and then build off of your personal choices, making a uncluttered skeleton look like this:

Now, this is reveals a lot about Lee’s personal playstyle, because he loves having options. Now, he didn’t want to dedicate himself to a certain list because he is still messing around with counts and trying to get everything to work just right, but here is my take on the deck:

pokebeach.comThe balance of Trainers and Supporters here is important because setting up your lock quickly is very important and is where the Communications and Rare Candy come into play.

Junk Arm has no use in this particular variant because it just doesn’t work under Trainer lock.

The heavy Vileplume line is in place to prevent those early Pokémon Catchers from doing too much damage during the early game. The Mantines allow you to get your Beartic out fast and the Bouffalant is very important as the revenge aspect of his attack can pull you from behind in the late game.

However, though this is probably the most practical version of the deck, there is a problem concerning energy acceleration. To deal with this problem, you have a couple of options. You can use either Feraligatr or Floatzel and Blastoise to accelerate your energy being attached to Beartic, along with giving yourself a backup attacker when necessary. Here is my really quick take on the deck.

pokebeach.comI will probably eventually drop a couple of energy through testing and I may throw in either Professor Juniper, PokéGear 3.0, or Sage’s Training in place of the dropped cards. The list I put here follows my lust for consistency, though with my luck it is almost never achieved.

However, I believe that the list gives the consistency that is needed for this type of build. With the tight Pokémon lines there is almost no room for tech Pokémon, but the differing weaknesses should help with a weakness problem, if one should occur.

However, with Catcher in the format, it’s going to be difficult to get anything going if your opponent sets up first, mainly because the list is really tight and barely allows for any recovery (not like we have reliable cards for it anyway).

This build also turns away from going for the Beartic lock, but instead provides for a mixed bag against multiple decks. Blastoise, if set up quickly, can take out Pokémon before they become a major threat, and even if Blastoise gets set up late, he provides great set-up if you have the Floatzels ready to go.

Another way to build this energy accelerator is with Feraligatr, giving you less options if you run it with Blastoise, in which case Beartic might as well be a tech. Otherwise, having Feraligatr as your only Stage 2 can provide a big boost in quick energy drop recovery, along with allowing you to play Lanturn Prime as your Yanmega and Zoroark counter.

With all of these options, I’m going to head back to the Vileplume deck and let you see this version of play.

This deck, Two Bears and Two Blooms, is a “teched” version of Two Bears One Plume, which is a similar decklist, but is overall more consistent, removing the Roserade and placing more emphasis on the two bears.

However, the major difference between the two decks is that the inclusion of Roserade can keep the lock moving continuously by timing your poisoning to KO your opponent’s Pokémon right before you start your turn, preventing your opponent from attacking, apart from retreating or evolving. By looking at this list, it should remind you a little bit about the deck that won Juniors at US Nationals.

pokebeach.comIf the threat of Yanmega is still too large for this deck, (which this deck has not yet been tested against), there are two options to put in over the 1-1 Yanmega line: Zekrom and Galvantula. Because of the inclusion of DCEs and Rainbow Energies in the decklist, both of these Pokémon can take a role in countering Yanmega.

Zekrom can use its Outrage to do a good deal of damage, whereas Galvantula can do something amazing entirely by itself. Its attack Leech Life, you do 40 damage and then heal the same amount of damage that you did to your opponent’s Pokémon.

Because of Galvantula’s 80 HP, it’s just out of reach for the Yanmega KO (providing there is no Kingdra in the list), and when Leech Life hits a full health Yanmega, it leaves the Yanmega crippled and Galvantula fully healed. However, this is untested, and just a bit of theory-mon, but I believe a good idea nevertheless.

One more thing that we must remember is that Beartic is not just a great main attacker when provided the support for the lock, he can also make a great tech for any deck that runs DCE.

If you think about how Cinccino is amazingly vulnerable to Donphan and Dragons and how neither Kingdra nor Zoroark are really going to help you in the matchup, Beartic makes perfect sense because a) he doesn’t lose power when he encounters a fire type on the field and b) he locks heavy retreaters in the active slot for 2HKOs (or 3HKO in Zekrom’s case if you don’t wnat to waste any energy), which is normally Cinccino’s job, but Beartic almost does it better.

In conclusion, the new bear in the format has a lot of potential, but I don’t really see it becoming the next big thing, especially with that dragonfly buzzing around everywhere in the format. However, to not talk about a popular card and its potential uses could be deadly. As the always told me in Boy Scouts, be prepared.

PS: Thanks to magneto1992 for the Two Bears and Two Blooms decklist and OddJob (AKA Lee) for providing his basic Beartic/Vileplume list. 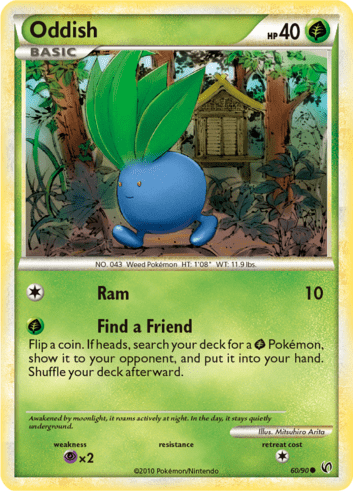