Hello, all you SixPrizers. This is Scizorliscious, and, acknowledging the lull between Worlds and BRs with no rotation and only seven sets in format, thought it might be better to write an article on something other than topics that have been recycled around these past few weeks and, no doubt, will continue to be in the upcoming ones.

I have just recently finished my testing with the newest (and possibly greatest) Unlimited deck known as PoryDonk, and now is the perfect time to write an article on it. So without further ado, I bring you…

PoryDonk – The Unlimited Deck with No Limits: An Overview

This deck is a relatively new one, with one of the necessary cards, Seeker from Triumphant, only coming out November of 2010. Since then, it has gathered much popularity with anyone who plays Unlimited, and has become arguably the best deck out-of-format.

Its ability to donk nearly any opponent setup is unparalleled within the world of Pokémon, which is what makes it such a formidable deck. PoryDonk operates on a standard Unlimited engine – Uxie, Professor Oak, Poké Drawer +, etc. are used for drawing through most, if not all, of the deck (scroll down to decklist for scans).

PoryDonk’s way of donking is to set up Porygon2 GE (with Broken Time-Space) and using its PokéPower, Download, to use Seeker repeatedly. One Seekers up the Porygon2 with Download and plays it back down again, ready for another Seeker to be used with its Power.

Once the opponent’s benched Pokémon have all returned to the opponent’s hand, Drifblim UD can be used with Boost Energy to Take Away the opponent’s Active Pokémon. Once that all has been completed, one’s opponent will have no Pokémon in play, thus losing him or her the match. And remember, this is all done on the first turn.

This is a fairly thin skeleton, as this deck has options with which it can work. It is necessary that one play either multiples of the necessary non-Pokémon cards (that is, Boost Energy and Broken Time-Space), Rotom UD, or both. Otherwise, they will get stuck in the prizes more often than one would like, which can lead to severe problems.

I will include scans and details of cards later on, so those resources are there if you would like to check what a card does or why it’s included in the skeleton.

Note that this is my personal list, and caters to my own preferences. It is fairly standard, but I’ll come back to that in a bit.

I chose to play a 1-1 Drifblim line. This is fairly standard, as any prized Drifloon or Drifblim can be taken care of with Azelf, and Drifblim isn’t truly necessary until the end of the game. As for my choice of Drifloon, the one from Majestic Dawn can attack if need be, but honestly, the Drifloon will most likely never matter.

This is played in a 2-2 line, only because it needs to be out fairly early so that all the Seekers in-hand can be used up to lower the hand size for Uxie or Professor Oak. The choice of Porygon, again, doesn’t really matter all that much.

GE is probably the most desirable (as it has a better weakness overall), but that will only matter if you’re against a Fighting-type that can attack for exactly 30 damage (besides Tyrogue, which doesn’t count Weakness) AND you have a Porygon active.

Since this is pretty unlikely, I didn’t waste my time or money on getting Porygon from GE, and if you have ones from TR (or any set for that matter), they should work just as well.

This card is the best source of searchable drawpower in the game. The problem is that it does take up a useful bench spot, so including four would probably be overkill. Three tends to be a safe number, so that even if one is prized, you don’t have to waste an Azelf (and a bench spot) on getting it out again.

This is simply the best card for getting Pokémon out of your prizes (and checking them at the same time). If a Drifblim is stuck in there, Azelf will do the job. I play two only because of the 1-1 line of Drifblim. With 1 Azelf, the risk of both an Azelf and a Drifblim or Drifloon being prized would actually be fairly great.

This is for those rare scenarios where two Broken Time-Spaces or Boost Energies are stuck in the prizes. It takesup a bench space, so it can be a pain (especially because you’ll want to use Azelf to check your prizes first as well), but it’s worth it.

People have given me grief about this card, but I swear by it. It is the preferred starter for this deck, so it’s run in a count of four. Its Overeager Poké-Body lets you go first automatically, so in mirror match (or most matches against other Unlimited decks), this can give you the win.

This is pretty standard for donk decks. Run with four, this card is simply placed down and discarded so that you can draw an extra card. It’s very deck-thinning card, which makes it useful. It’s not entirely necessary for the deck, but it helps a lot.

This card can be pretty useful, but it’s a double-edged sword. It’s run in a count of three because, while it does provide great drawpower, discarding a Drifblim, Seeker, Item Finder, or Computer Search is never fun.

What can I say? It’s a Trainer that lets you draw three cards. It’s great. Running four even wouldn’t be a bad idea.

This is a great card. Discarding two cards to search for any one card is great, especially later in the game, where you’ll run into dead-draws such as Sableye, Boost Energy, and Broken Time-Space.

Even without being able to play two at once, this card is fine. Just play it to draw a card. But if you happen to have a hand with two Drawers in it, play them both to get any two cards from your deck. That’s why you run four. And remember – it’s not a bad idea to use a Computer Search to get a Poké Drawer + if you already have one. It both thins your deck and lets you search for another card.

Yeah, this card doesn’t have to be run at all. But I play four. Part of it is that with 20 Pokémon, it can almost function as a Luxury Ball at times. The other part is that it can be oh-so-useful for getting a Drifblim or Porygon2 that can’t be played yet into your deck so you’re free to use a Professor Oak.

If you need an Uxie, this can help. Just be sure not to get double-tails. An all-around good card to search out Basics, which this deck has plenty of.

One is standard, but more is unnecessary. Just getting any Pokémon is really useful in any situation.

This is a very useful card. Its best uses are on Seeker (since it was created before the T/S/S split, it can be used on Supporters), Erika, Poké Drawer +, and Scoop Up. Four are played just because it’s so handy in any situation.

Uxie loves this card. And it’s great. You might even consider running four.

If you go second and happen to have a Drifloon or something KO’d, not to worry. Pokémon Retriever is here. No need to play more than one.

Just another way to get Seeker back (and without discarding cards, like Item Finder). You’ll really only need one – with this and four Item Finder, Seeker can usually be played about seven or eight times on average.

These cards are for getting your Drifblim Active. Switch for if there’s a Spiritomb or anything else you don’t want Active on the Bench, Warp Point for something Active you want Benched, such as something with Cessation Crystal. A 1/1 split should work fine, it’s doubtful you’ll be in either of those positions ever.

It would be hard to have PoryDonk without Seeker. This is what makes it all come together.

In order to achieve a T1 Porygon2 and Drifblim, you’ll need this. Two is a good number: enough so that it won’t get stuck in prizes, but not so much that it clogs up your hand later.

You’ll need this to attack with Drifblim. As with Broken Time-Space, two is a good number. Just remember that you have to attach it after evolving to Drifblim, and not before.

That should give a pretty extensive overview of the deck. Now, here’s some cards you might want to consider adding instead of some of the less-important cards here:

This is a tech for Spiritomb. I don’t play it because it’s rare you’ll draw into it before the Spiritomb goes away, but it does give you a good chance with it.

With the release of Triumphant, PoryDonk has risen from nonexistence to notoriety for being, simply-put, the best deck in the Unlimited format. It is a very fun deck to play and can win nearly every game. Besides that, it is very cheap – about forty dollars to build – so you won’t break the bank on a deck you can’t even bring to a tournament.

Plus, the cards used in this deck are fairly commonly-had, so it’s not unlikely that you could build it simply by trading at your local league.

Just remember that if you do choose to play it, do not overdo it – donks are often frowned upon, particularly in a league setting where people go simply to have fun. No one likes getting beaten without drawing a card, and that’s pretty much what PoryDonk aims to do.

As long as you’re considerate with your use of this deck, you won’t regret building and learning to play PoryDonk. It is, in a nutshell, an Unlimited deck with no limits. 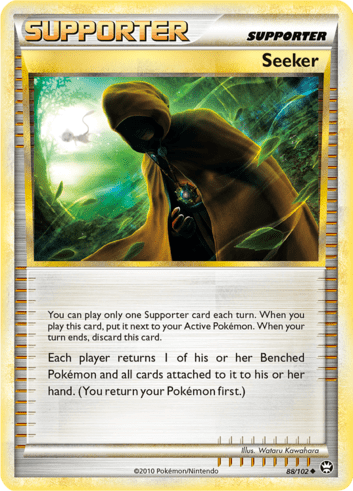