This is a check-in, news update type post to make a few announcements and get feedback from y’all on some things.

Most of my time the past couple months has been spent working on TcgScans.com, which is a project I’m sure I’ve mentioned (far too) many times already. The project has taken some twists and turns, but you know I’m cool with that and will just go with the flow, and I’m finally at the point where you could say the site is launched.

Right now, here are my main purposes behind the site:

1. Quickly look up cards if you don’t know what they do

I’ve got an search suggest feature (kinda like Google) so if you start typing a card name, it’ll show up in a drop-down list and you can click on the card you’re looking for. It’s pretty slick.

I might eventually add a voice search feature as a convenience for people with mobile devices. I don’t know how good it’ll work considering some of the weird Pokémon names (try Zigzagoon), but it’ll be the same voice recognition thing that Google uses (I think).

Right now I’ve got prices from Amazon, Professor-Oak, Troll and Toad, and Collector’s Cache showing. There is also a link that’ll do an eBay search for you, but it’s on my To Do list to pull up the best eBay price and show it on the page as well.

This is a feature that wasn’t in my original plans, but along the way I thought it would be cool if I could show prices for easy comparison, and somehow I figured out how to do it. (Yes, I’m good.)

I am honestly not sure how useful this feature is, so I might end up removing it, but for now it’s there. My intentions behind the ratings is basically to give a new/intermediate player a basic notion whether or not a card is good.

Obviously some ratings will be way off (why is this Hoppip a 6.2?), but hopefully if enough people rate the cards, the numbers will even out. I’m still monitoring whether people are actually rating the cards or not… I’d say there is mild success so far.

The advantage to not including the rating option is that I can make the site load a little faster.

This is another feature that may eventually be removed, or down-graded. Right now I’ve got Disqus comments up on that site, but may switch to the default WordPress comments (which will also help the site load faster).

I’m not sure what to expect as far as commenting goes… like I doubt any advanced strategy talk will spring up, but the option is nice to have. I’ll keep an eye on the commenting activity over the next couple weeks and make a decision. I really want the site to load super fast, so I’m trying to cut down to the necessities.

Also, one other advantage from switching to WordPress comments is that I could auto-link card names (more on that in a second).

If you’re ever bored out of your gourd, there is a random card feature. It’s kinda fun to see cards you might not have seen in a while (or ever).

That’s mainly it I guess. I’m always looking for feedback, so please let me know if you have any suggestions. Literally any feedback you have at all helps me. Even something as small as “this doesn’t work how I thought it would” or “the colors are stupid” is helpful for me.

One thing I know I need to fix for sure is that the pages load real slow sometimes. The reason is that the card pricing feature is energy-extensive, but I’ve got some ideas on how to adjust things so you don’t have to deal with that lag.

And here is bar graph of the site’s traffic (pageviews) so far, incase anyone is interested:

Edit: Pageviews the day after posting this announcement:

But enough about that… onto the next order of business:

You may have noticed card names on the site underlined like this: Sharpedo TM

This wasn’t in my original plans (though it probably should have been), but I thought it would be helpful for newer players to link all card names mentioned within articles to their appropriate page on TcgScans.

pokebeach.comAt first I was just going to put a link at the bottom or top of every post that said something corny like “Don’t know what these cards do? Look them up on TcgScans.com!” but I thought it would be way cooler if I could somehow automatically link the cards within the articles… so I did some research and figured out how to do it.

There are some bugs at this point that I’ll have to work out, but so far so good. I’m hoping that it’s helped some people out so that they know what cards the writers on the site are talking about.

I can image how confusing it must be for some people when they don’t know what all the cards do, so hopefully this helps get everyone on the same page. So if you’re reading an article and you come across a card you aren’t familiar with… just click it!

I could link elsewhere (like eBay or something), but I think going to TcgScans.com is probably best.

I will eventually look into auto-linking cards on the forums as well, and I could also pass along the code as a plugin to anyone else that has a WordPress site and wants that feature (like OneHitKO… does anyone else run WP?).

One thing I wanted to make sure with the linking is that the links were unobtrusive, since I knew there would be a lot of cards linked within an article and I didn’t want it to be distracting. Is the dashed underline ok with everyone?

Also, I am considering just linking ALL cards within decklists by default. Right now it links the card only the first time it’s mentioned within the article, so the full decklists aren’t linked. Any thoughts on that?

For any writers that want to take advantage of the auto-linking within their articles here’s how it works:

The very first time a card name is mentioned within an article, it’ll be linked. Automatically. You don’t have to do anything. Just make sure you type the card name with set abbreviation for Pokémon. Trainers and Energy don’t need the set abbreviation.

And if a set has more than one version of a Pokémon, then make sure to include the set number too. That’s it.

I do think it serves some usefulness as far as getting feedback and keeping the quality high, but some people take the dislikes personally, and I don’t want them to have to stress over that.

We’d go with just a like button, akin to Facebook, if we were to make the change.

4. Yes, it’s a Saturday night and I’m writing this.

Hopefully next Saturday night I’m out getting into trouble (make it double).

P.S. Check out the latest episodes of Prof-It! and PokéClass. 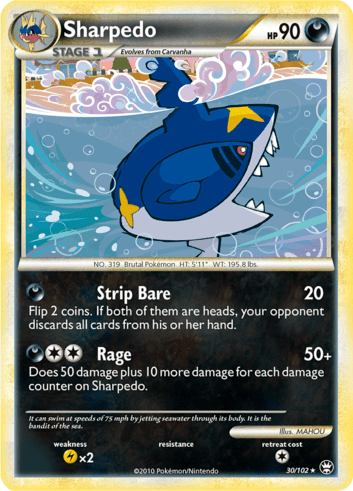