Hi SixPrizes!! Well, as I promised in my Gothitelle front page article, I said I’d bring you back a good Battle Roads report, so here it is. I would have had one for last month, but certain things came up where I wasn’t able to go. I know that there haven’t been many Battle Roads reports on here and can’t figure out why. Maybe some people don’t want to put up their reports, because they didn’t top. I don’t know, but I do know that this one is worth reading, whether or not I top. Without further ado, let’s move forward toward the report.

The History of GRD

Before I get to the report, I think it’s important that you, the readers know about what I played at the event, how I worked on the deck and how I came to my final build. This lets you really get insight on what I’m playing and helps you understand my matches better when I get to that part. I’ve been a fan of Gothitelle even before the set came out and was intrigued to figure out how to make it work as a deck and strategy.

The set finally came out and I was disappointed that I didn’t pull a single one out of my packs at the Prerelease. I quickly traded all of my good cards (Tornadus, Cheren, Beartic etc…) and anything they wanted for Gothitelle. I was banking everything on it being a good play for the upcoming Battle Roads and I was determined to make it work.

After that, I started to do research on how to play it, what partners would be good with it and trying my own combinations. With all of my research and playtesting, I decided to write an article about my deck to hear from the masses of people on here, to hear what they think about what I’m testing and the deck as a whole.

I got some mixed results, which resulted in me changing my deck for the better, which I thank you for. In order to get a better understanding of my deck, I started a strategy thread to get a broad idea from many players on how to play with it, different techs, to discuss the deck as a whole, and to help others with the deck as well.

With a lot of testing, researching and discussing things on the strategy thread, I came up with my final build, which I will show to you now.

I don’t mind sharing this list because the next set Noble Victories is coming out soon, and this deck will go through some changes, due to how I did at Battle Roads and adding some new cards from the set. Now that you know what I’m working with, let’s get to the report.

So me and my friend Ryan, who gave me a ride finally get to the store around 10:45 – just enough time to register before the cut off at 11:00. During this time I also help some of my other friends by giving them energies, a full set of 60 sleeves and cards that they needed for their decks. They did contact me the night before and told me to bring the stuff, so that was helpful.

So I finally finish my decklist sheet and get in line. Right when I finished getting my deck checked, I notice that the person in front of me had some bad sleeves, and the judge told him to either change the sleeves, or not play with any altogether. I just happened to have an extra set of sleeves, so I just gave them to him. It feels good to help players in need and I’m glad to help them. A little time passes after that, then the rounds start.

pokebeach.comSo we flip over our Pokémon and soon as I see a Yanma and Magnimite, I instantly think of the games I playtested against this deck. He sets up Yamega Prime and Magnezone Prime by turn two, before I’m able to get up anything. I knew the game was over for me as soon as that happened, but I played it out a little bit to see if I could get anything going.

I never got up a Gothitelle, or Reuniclus throughout the whole game, which is terrible for me. I knew it would be like this if they set up before me.

This guy had a straight Emboar deck with both Emboars and he played Magby TM to stall with it’s burning attack. So he starts out by burning my Gothita with Magby. I quickly set up with a Pokémon Collector, grabbing another Gothita, and 2 Solosis. I almost get Knocked Out by burn until I evolved into Gothorita which saves me. He only has a Pignite with a couple of Energies on the bench. This made it easy for me to set up Gothitelle and Reuniclus perfectly.

He was still burning me, even though I was moving the damage around with Damage Swap. I finally get enough energies to Knock Out his Magby. Then I Knocked Out a couple more Pokémon before he sends out his Emboar that he’s been powering up on the bench since the beginning of the game. He Knocks Out my active Gothitelle, which forces me to promote the one on the bench. From there, I steamrolled him for the win.

pokebeach.comSoon as we flip over our Pokémon, I was relived when I saw what he was playing with, because I had barely lost to this matchup before. He gets a Zekrom, Tornadus, and Bellsprout TM on the bench while I have a Reshiram up. I take the advantage and Play Pokémon Catcher to bring up his Bellsprout, attached a Double Colorless Energy to Reshiram and Knocked Out Bellsprout.

Turns later, he uses Black Belt to Knock Out my active Gothitelle. By this time I was in a good position to do anything I wanted. I brought up another one, evolved Duosion into Reuniclus and started moving counters around. There was nothing he could do to stop the lock, so he scoops.

This was another matchup I was confident in winning as soon as we flipped over our Pokémon. He scares me in the beginning because he starts Knocking Out Pokémon with only one Pokémon on his bench. Of course, that sets off my Twins, so I’m able to get the cards I need to set up perfectly. Once I got up the lock, there was nothing he could do to Knock Out my Pokémon. I came back and took prize after prize, until the end.

Round 5 vs Reshiboar w/ Samurott Tech

This was the weirdest, longest, and toughest game I had all day. We flip over the cards and I instantly think he’s playing straight Reshiboar, until I see an Oshawatt. I was completely confused as to what his strategy was. He sets up 2 Ninetales HS on the bench and starts drawing cards like crazy.

Then he gets the cards to Knock Out my Pokémon one by one. He uses Pokémon Catcher and Junk Arm for two-three turns Knocking Out my Gothitas, preventing me from getting up a Gothitelle. I battled through it and finally got one up with Reuniclus on the bench. By this time he has 1 Prize left, but he can’t do enough damage to Knock Out my active Gothitelle.

So I start Knocking Out his Pokémon one by one until I make the one mistake that will haunt me for the rest of my life. I played Pokémon Catcher and brought up his Ninetales and Knocked it Out instead of his Tepig. That Tepig would go on to become an Emboar to Knock Out my active Gothitelle, giving him the win.

There were too many 4-1’s so I knew from that point that my run was over. I had lots of fun though and my deck did really well, despite me not killing the Tepig. It was definitely the right play for the event. It just needed a little tweaking and it would have been perfect.

To the PTO for hosting, meeting and having fun with my friends from around NC/SC, the owners of Above Board Games (you guys are great and I love coming to all of your events), and my opponents which were all great people and showed good sportsmanship.

Not killing the Tepig!! :frown: 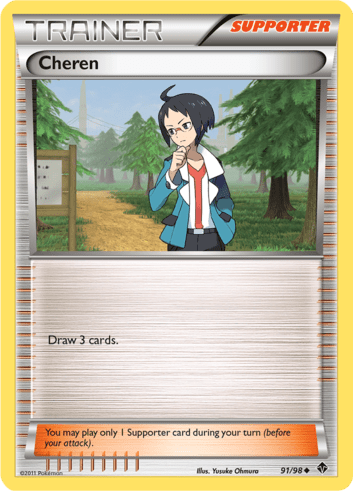