pokebeach.comHey all! It’s Celebi’, back with another Card of the Day! Today’s subject is Sunflora HS. While she’s been reviewed before, that was last format, and Sunflora is more widely played now.

Sunflora’s statistics are nothing special – Grass type is awful, as I’ve mentioned in pretty much every Grass Pokémon COTD I’ve written. 80 HP is rather low for a Stage 1 nowadays, and one Retreat Cost is average.

Sunflora just isn’t the kind of Pokémon that would be a mean, tough attacker. Look at that adorable smile! No, she’s more of the sweet, benevolent type, content to sit back and help out her teammates. Her attack reflects this attitude – for a nasty GGC cost, Blade Arms does a mere 40 damage.

So, Sunflora obviously isn’t cut out to be a main attacker – but her Poké-Power is great. Remember the deck called Speedrill from a few years ago, a variant of which ended up winning Worlds in 2009? It utilized Beedrill RR’s Poké-Power, Flutter Wings, which let you search your deck for a Grass Pokémon and put it into your hand. Being able to grab a Pokémon from your deck every turn meant that you could set up quickly, swarm, and use Beedrill GE’s “Band Attack” to do an insane amount of damage for just one Grass energy.

Sunflora’s Poké-Power, Sunshine Grace, is exactly like Flutter Wings. Beedrill was great because it both searched and provided fuel for Band Attack; Sunflora, while it doesn’t increase your damage output, is markedly better because it’s a Stage 1.

Ever since Rare Candy got nerfed, Stage 2’s have become a pain to set up, and Stage 1’s are preferred. Sunflora takes advantage of this speed. As soon as you get a Sunflora out (optimally on turn two or three), you give yourself not only a reliable way to set up, but also guaranteed support late in the game, once you’ve exhausted your Trainer and Supporter resources.

Sunflora’s main use in this format is in Mew Box, a lock deck that uses several Grass types, such as Vileplume, Yanmega, and Jumpluff. Vileplume decks sometimes have problems maintaining consistency, since they are unable to use staple Trainers such as Pokémon Communication. Sunflora gives that extra boost needed to keep streaming attackers for the entire game.

While Mew Box’s roguish popularity has been somewhat eclipsed by a newer variant, that is, Mew/Stage 1s, it’s still a pretty viable deck. Most notably, Mew Box has a favorable matchup against Zekrom, which seems to be the co-BDIF (along with ReshiPhlosion) right now.

Sunflora has main weaknesses: first of all, its basic form, Sunkern, is an awful starter. Second, it has that awful Fire weakness. Then, of course, it is an obvious Catcher Prize (provided Vileplume isn’t out yet). But she remains the best, most consistent Grass-type support in the format, and definitely merits a spot in any Grass deck.

What do you guys think? Have any interesting deck ideas including Sunflora? Feel free to leave a comment below. Thank you all for reading! 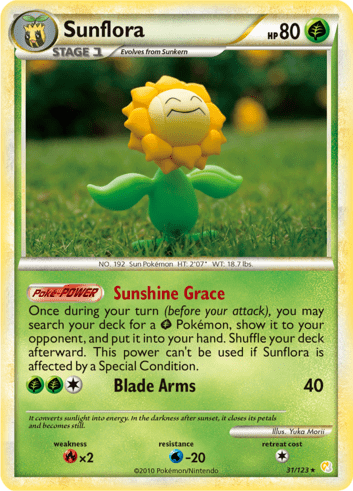