pokebeach.comHey y’all! Celebi’ here again with a Card of the Day review of the poor ol’ genie, Thundurus. He’s always overshadowed by his big brother Tornadus (who got two COTD articles and a dramatic debate). So I decided to give Thundurus a chance to shine (pun intended – he’s extremely shiny IRL).

Thundurus is a 110 HP basic Pokémon – very hefty, and out of range of being donked by anything but Zekrom. Lightning typing is nice since you’ll hit for weakness on almost any Water type, but it also means you’re weak to Fighting. However, Donphan is seeing less and less play, so this weakness isn’t as horrendous as it used to be. Having one Retreat Cost is OK; not the best but not terrible either.

One of the best advantages of being Lightning type is that you have access to arguably the best Energy acceleration engine in the format – Pachirisu CL and Shaymin UL. These two make it possible for Thundurus to attack on the first turn without much trouble.

But are his attacks worth it? The first, Charge, is nothing special – it lets you search your deck for a Lightning Energy and attach it to Thundurus. If you aren’t able to get Pachi and Shaymin out, by using Charge you can still get off Disaster Volt by turn two (two manual attachments and one by the attack).

Now for Disaster Volt itself. This attack, for LLC, does 80 damage and makes you discard an energy attached to Thundurus. This makes him remarkably similar to Reshiram, whose Blue Flare also costs two specific energy and one colorless. Blue Flare does 40 more damage, but makes you discard two energy, meaning that in order to use that attack again next turn, you’ll need to use some sort of acceleration such as Emboar or Typhlosion. The beauty of Thundurus is that you only discard one Energy, and can just manually attach again next turn.

If you wanted to actually base a deck around Thundurus, you’d need a Pachi/Shaymin engine for consistency and speed. You might also include some cards like Energy Retrieval or Fisherman that can get the energy cards back from the discard.

Noble Victories is coming out soon, and it includes a card that meshes perfectly with Thundurus. That card is Eelektrik. He’s markedly better than his evolution, Eelektross, because he has a great ability: Dynamotor.

True, you can’t attach to your active with Dynamotor, but you’ll be able to grab the energy you discarded and use it to power up a fresh Tornadus on the bench. This way, you can replenish your active’s Energy without worrying about whether to devote your attachment to a backup attacker.

The main problem I see with Eelektrik is its two Retreat Cost, which could be bothersome with Catcher so prevalent. However, once NV comes out, he’s definitely a good option to test in any Thundurus deck.

Zekrom overshadows Thundurus in many aspects: HP, damage output, and Energy conservation. But Thundurus doesn’t have that awful recoil damage. He may never become the BDIF, but he’s barely played at all, so we don’t know quite how he’d do in our metagame. He’s decent, though.

In this article, I’d like to implement a rating system identical to the one on TcgScans.com. Here’s a rundown of the scores.

I have just one request: if you disagree with my rating, please explain! Rather than just commenting, “That rating stinks, Thundurus is so much better/worse than that!” which isn’t helpful at all, explain why you think the card deserves a different rating and what you yourself would rate it.

So, I’d rate Thundurus at 7/10. It’s a fairly solid card, but it really hasn’t had an impact on the format like Tornadus has, and I think Thundurus will forever be overshadowed by both Tornadus and Zekrom.

What do you guys think about Thundurus? Please comment below! Thanks for reading! 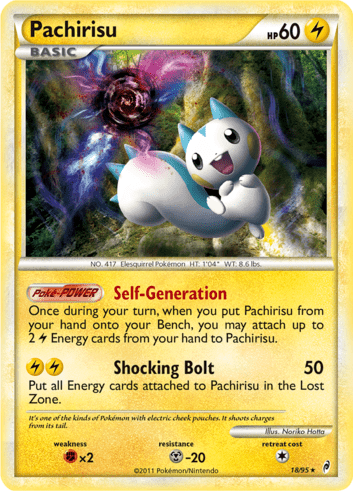